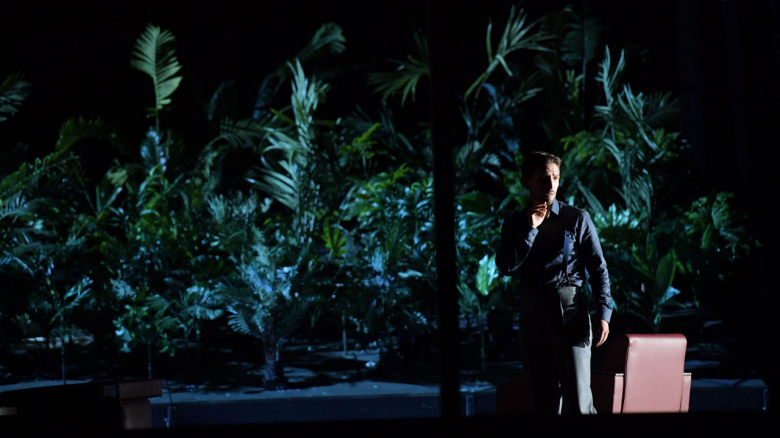 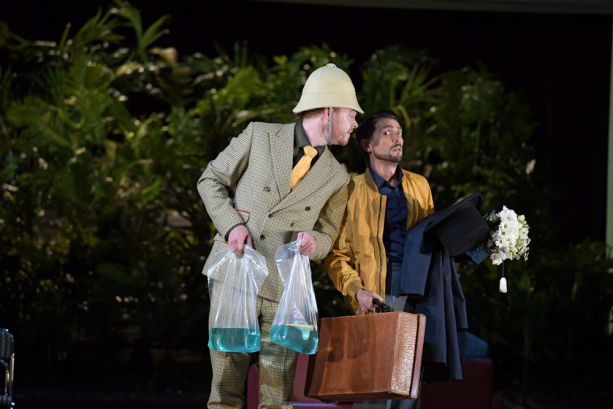 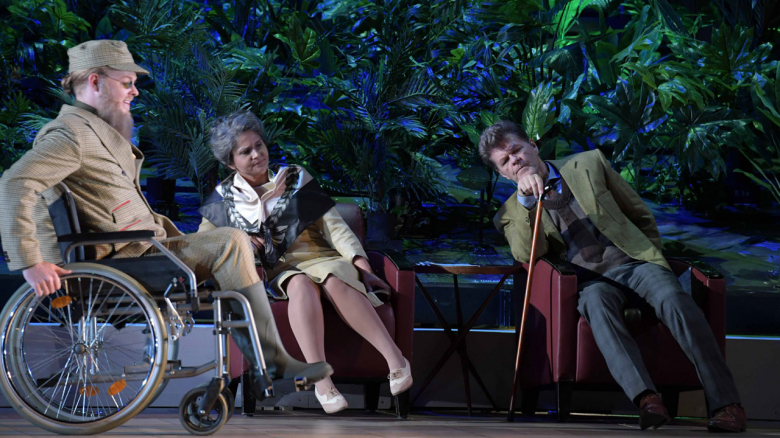 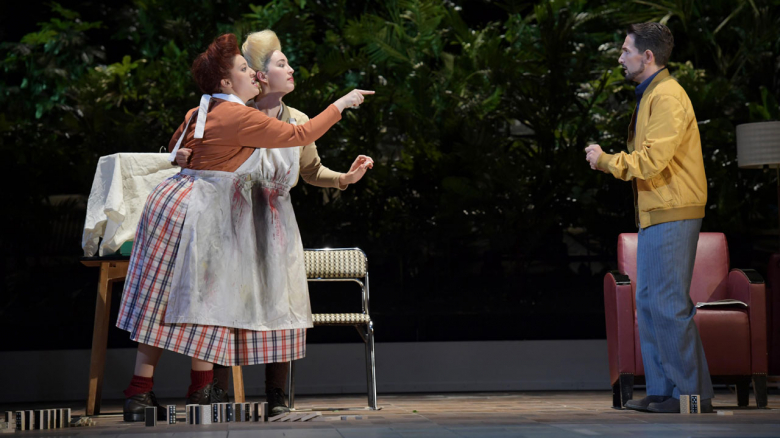 Sung in German with German and English surtitles
Introductory talks, in German, in the Holzfoyer half an hour before performances begin

ACT I The French book-seller Michel Lepic returns to a seaside town to find a girl called Julietta he met three years ago. He has been haunted by her since he heard her song through a window. His search proves difficult because all the inhabitants have lost their memories and forget things that happen almost immediately. When Michel asks a young Arab where his hotel is, he's told that it doesn't exist, only to find out a second later from the boy's father that he is standing in front of it. Michel goes inside. Women selling birds and fish argue loudly. The man in the window's accordion playing disconcerts everyone, awakening memories. The young Arab and man in the window indulge in snippets of recollections, but are interrupted by a man with a hat, who thinks he is a shipowner. Michel calls for help. He tells the policeman that the old Arab used a kitchen knife to force him to tell his life story. The policeman explains this away be telling him that nobody here has memories. Michel is about to be arrested for causing confusion, but after describing his childhood memories of a toy duck, he is named captain of the town instead. Exhausted, Michel begins to tell the man with a helmet about the first time he met Julietta, but he is impossible to talk to. Julietta appears to remember Michel and to have been waiting for him. They go for a walk and Michel, giddy with love, bumps into the policeman, who is now the postman. Michel and Julietta's conversation falters. They arrange to meet in the wood. ACT II Michel is waiting in the wood. Three men pass by, looking for Julietta. He meets »old father youth«, who runs a business pouring glasses of wine and making up memories he claims to have of his guests. A palm reader predicts that Michel's rendezvous with Julietta will end badly; she arrives, but they cannot converse properly. The memory merchant tries to tempt them with beautiful, adventurous memories. While Julietta is enthusiastic, letting herself be carried away by the fictitious recollections, Michel wants to tell her about his real memories of her. When he pours out his heart, Julietta is bored, makes fun of him and wants to leave. They argue. In desperation Michel draws his pistol, a shot is fired, a scream is heard. Michel makes sure that his gun has not gone off, but a tribunal for his execution has already been convened. Taking advantage of the absent-mindedness of the prosecution, judge and executioner, Michel talks about his first meeting with Julietta, hoping to make them forget what they came to do. And, with the memory merchant's help, he succeeds. He meets the policeman again, who is now a forester, who assures him that it was he who had fired at a snipe, but missed. No other shots were fired. Back in town, Michel asks two sailors to look for a young woman in the woods. They return with Julietta's veil. Michel is not sure of himself any more. He doesn't know why he came here, and rushes away. Julietta's song is heard again, but he no longer recognises it.
ACT III Michel is back in the central office for dreams, where dreams are organised. The controller, fed up of seeing him every night, tells him that if he were to wake up now he would find himself at home in bed. But Michel cannot accept that everything was only a dream; he wants to go back to Julietta, despite being warned that he could be lost in dreams forever if he doesn't return to the normal world in time. Various people arrive to order their dreams: a beggar, who is sent away because he has come on the wrong day, a hotel page, taking a nap during working hours, and a prisoner who, the night before his execution, wants to dream of a bigger cell. Michel hears Julietta calling but, at first, cannot go to her. She continues to call for him and he eventually makes his way back to the seaside town.

Nostalgia draws the travelling book salesman Michel back to a little port where he once fell in love with a woman he heard singing from a window. At the station, before starting to look for her, he suddenly realises that all the inhabitants have lost their memories. Her song does finally lead him to Julietta, who thinks she remembers him ... The boundaries between reality and illusion are permeable in this surreal work. Martinů's thrilling lyric opera, from 1938, leads you into a world where time seems lost, where memories are on sale, but not necessarily trustworthy. Julietta's song retuns as a Déjà-ecouté, superficial fragments of memory in which recurring dream appear and vanish again. An atmospheric sound language, influenced by Debussy, popular music of the time and Czech traditional music combined in this multi-facetted composition to produce an absurdly beautiful tone poem. Florentine Klepper brought Martinů's dream world to the stage with a feeling for the fantastic, with sometimes almost spooky, sometimes amusing moments.