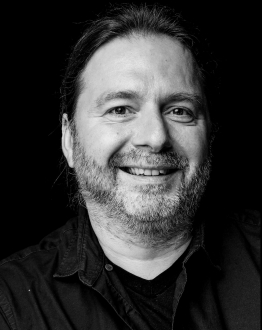 Jan Hartmann has worked at Oper Frankfurt since 1999 and became a Beleuchtungsmeister (lighting master) in 2010. He recently worked on Fauré's Pénélope in the main house, Rossini's La gazzetta in the Bockenheimer Depot and Rusalka and L'elisir d'amore at the 2019 Winter Festival in Erl. This season he lit new productions of Amadigi and A Midsummer Night's Dream and returns to the Tirol Festival in Erl this summer for a new Die Walküre (Rheingold opened in 2021) which is followed in 2023 by Siegfried and Götterdämmerung. His first production for Oper Frankfurt was Neunzehnhundert / Nineteenhundred in 2011, which was followed by Tilimbom, Idomeneo, Das Spiel von Seele und Körper, Orpheus, Der goldene Drache / The Golden Dragon, An unserem Fluss / By Our River, Julietta, Le cantatrici villane, L'Africaine, Dalibor, Das schlaue Füchslein / The Cunning Little Vixen and Rigoletto. Projects at other opera houses and theatres have included the Balthasar Neumann Ensemble Festa Teatrale Carneval in Hong Kong, for the choreographer Deborah Hay As Holy Sites Go and Verdi's Falstaff at the Nationaltheater in Mannheim.  Jan Hartmann has also been working as a professor for lighting design at the Hochschule für Gestaltung in Offenbach since 2013.