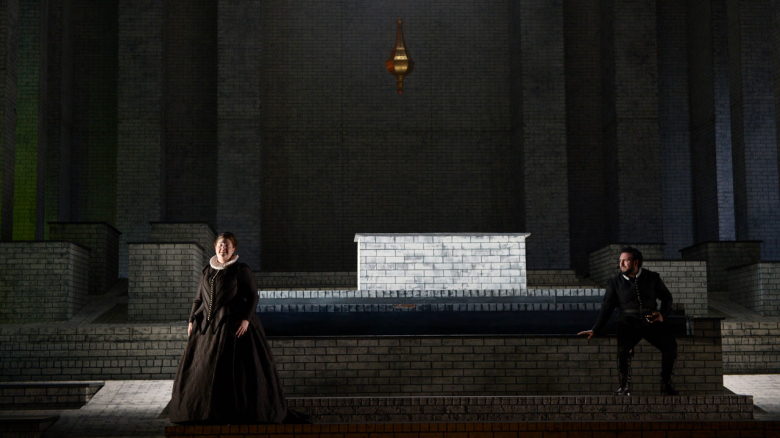 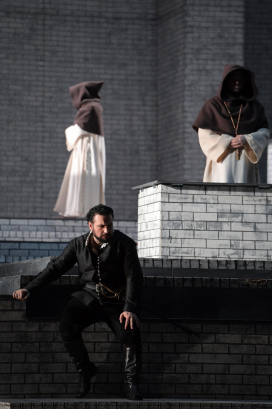 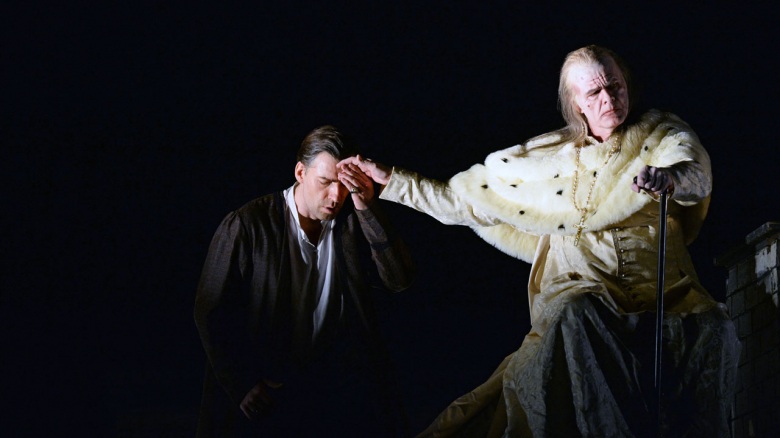 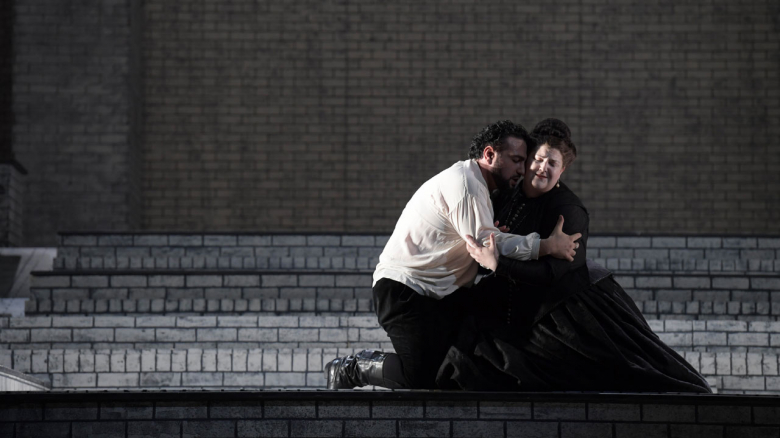 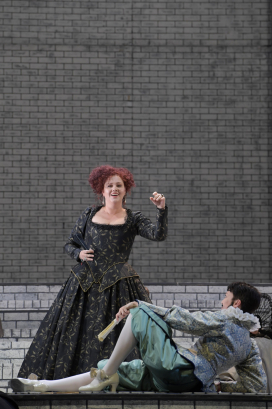 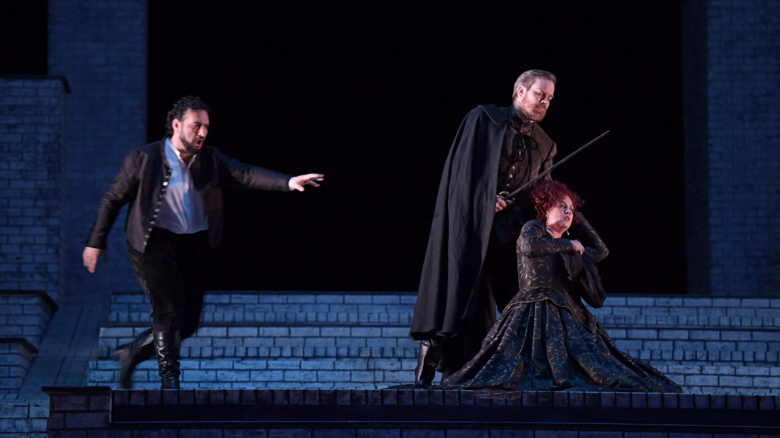 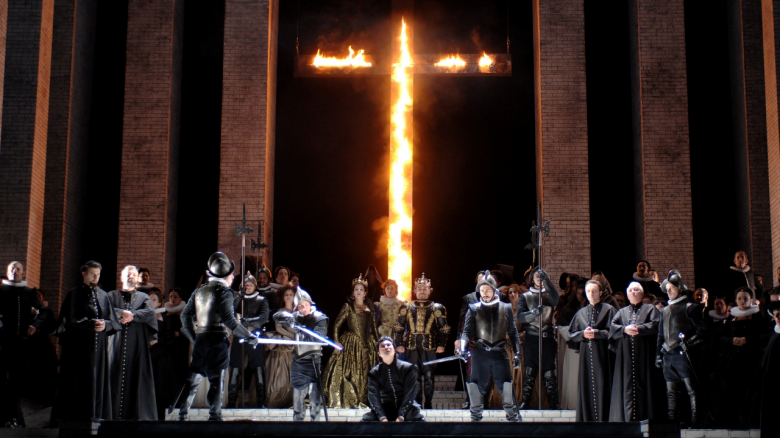 To strengthen peace negotiations between France and Spain, Carlos, heir to the Spanish throne, is to marry Elisabeth, princess of France. Carlos, dying to know what his future wife looks like, has followed the Envoys to France. In a forest near Fontainebleau, Carlos and Elisabeth meet and fall in love. They are devastated when they find out that the King of Spain now wishes to marry her himself. Her people beg her to accept his hand and she reluctantly agrees. On their way back to Madrid the court visits the cloister of San Yuste to pay their respects at the grave of Charles V. Monks sing about the finite nature of earthly existence. Posa, Carlos’ childhood friend, tries to distract Carlos from his misery by urging him to take up the cause of troubled Flanders. Both reaffirm their friendship in the name of liberty. Princess Eboli and other ladies are waiting for the Queen: Eboli sings the Song of the Veil. At a private meeting arranged by Posa, Elisabeth promises Carlos to ask the King to endorse his Flemish venture. Carlos again swears his undying love for Elisabeth. Philip, finding his wife alone, banishes her closest friend, who assumes responsibility for this unguarded moment, to France. Posa speaks frankly with the King, who, impressed by his honesty about Flanders and the concept of liberty, trusts him. He tells Posa that he suspects the Queen of infidelity and asks him to watch her. In Madrid, Carlos has received an anonymous note. He goes to meet a veiled lady who he assumes to be Elisabeth. But it is Princess Eboli, who is in love with him. By the time Carlos realises his mistake it is too late. Eboli realises that he still loves the woman who is now his stepmother and swears revenge. Posa arrives and asks Carlos to give him any recriminating papers he may have that mark him as a supporter of Flanders. During a ceremony at which heretics are to be burned, Carlos asks his father to make him Governor of Flanders; when he refuses, Carlos draws his sword. Posa disarms him: Carlos is arrested. INTERVAL Philip realises that Elisabeth has never really loved him and feels very lonely. The Grand Inquisitor appears, demanding that the King show no mercy to his son and insisting that Posa be put to death. Philip refuses to sacrifice the only incorruptible man among his advisers. Elisabeth has lost a jewel box. Philip produces it and the portrait of Carlos it contains. Philip accuses his wife of being unfaithful. She professes her innocence. Posa reproaches Philip for his lack of self control. Eboli tells Elisabeth that it was she who stole the jewel box and admits to have been having a relationship with King. The Queen banishes her from court. Eboli repents and vows to enter a convent, but first of all she intends to save Carlos. Posa visits Carlos in prison and tells him he has incriminated himself as being the leader of the Flemish rebels and that Carlos will therefore be set free. Posa is shot. Before he dies he tells Carlos that Elisabeth will be waiting for him at the monastery the following day. Philip arrives to set Carlos free. Carlos tells his father that Posa incriminated himself in order to save him. He cannot forgive him ordering the execution of his best friend and tells the King that he no longer has a son. A rebellion, planned by Eboli to help Carlos, is thwarted by the Grand Inquisitor. On his way to Flanders, Carlos meets Elisabeth in San Yuste for the last time. They pray that they will be reunited in the afterlife. They are discovered by the King and the Grand Inquisitor. Before Carlos can be taken before the Inquisition a mysterious force, something from the time of Charles V, intervenes and removes Carlos from earthly jurisdiction.

Don Carlo, the Spanish King Philipp II's heir, falls in love with Princess Elisabeth von Valois, to whom he is betrothed, in 16th century France. Their happiness is short lived because his father, for strategical reasons, decides to marry Elisabeth himself. During the Spanish Inquisition it was the Grand Inquisitor who spread fear and terror, the silent ruler of the King, whose complete subjugation he demanded. Enlightened ideas come to nothing if sheep-like figures are moved about on a huge chess board. Verdi set Schiller's play to music for the Paris Opera so had to keep to the format of grand opéra. Dark sounds and glowing melodies combine to portray the beauty and splendour of the Spanish King's palace, Carlo's passionate love for Elisabeth and heartfelt friendship with Rodrigo. David McVicar's production, with Brigitte Reiffenstuhl's magnificent costumes and Robert Jones' impressive set, was an enormous success.