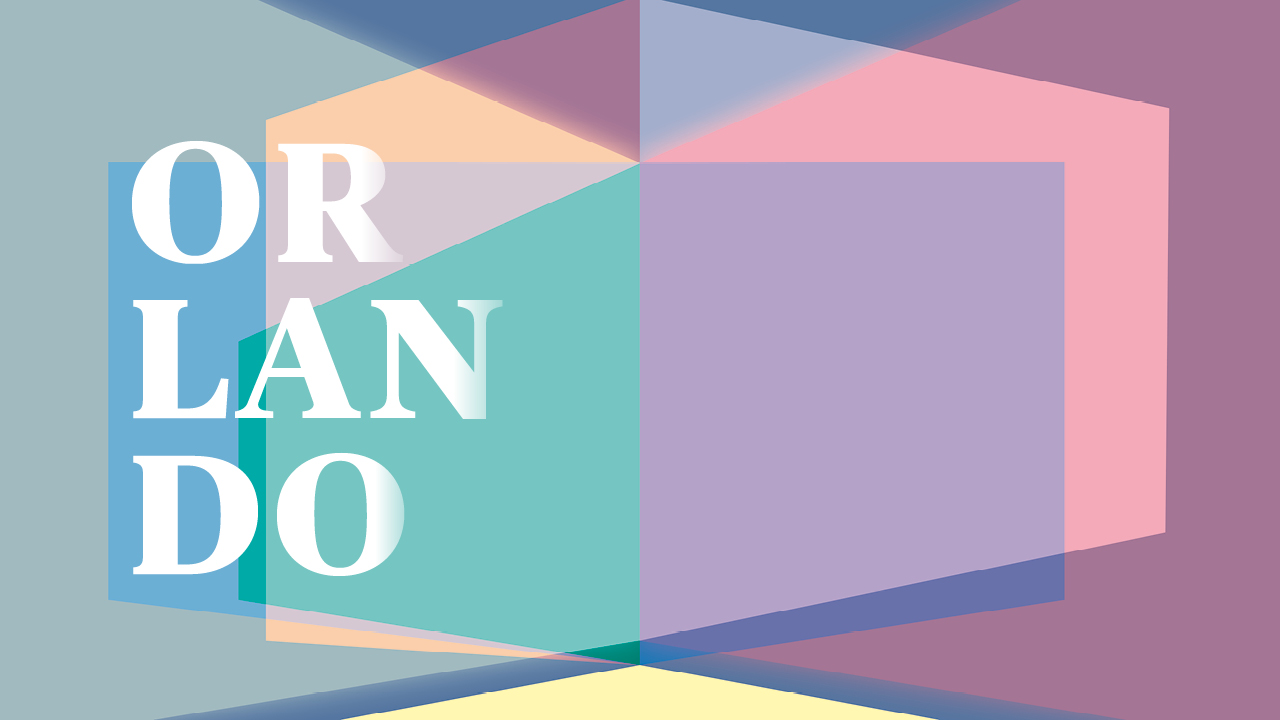 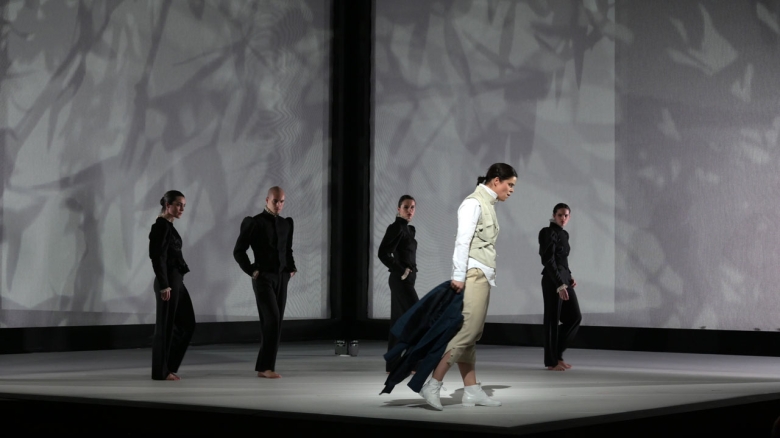 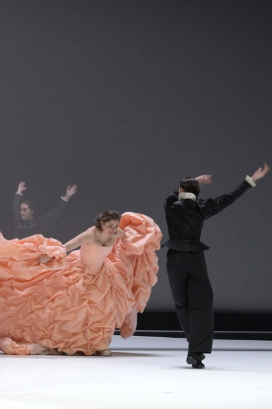 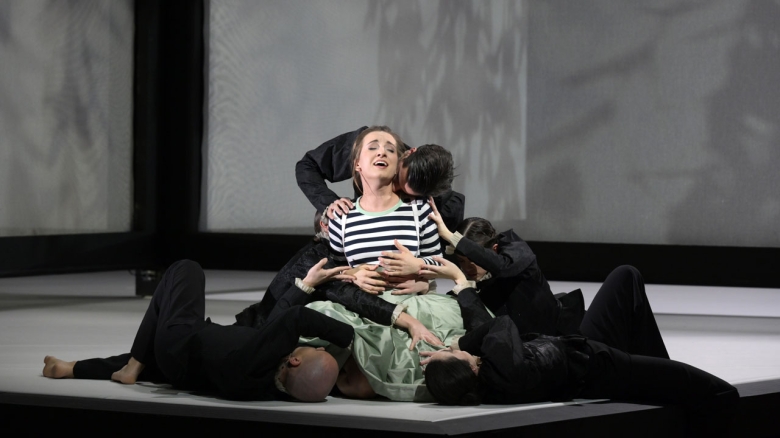 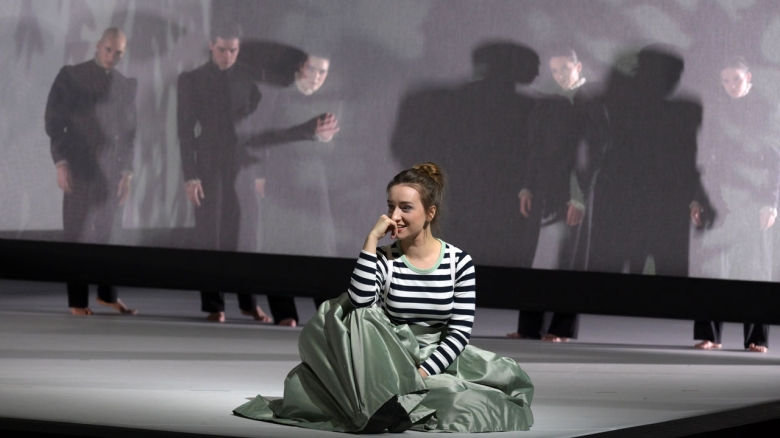 Orlando's lost his bearings: ought he seek happiness in love or by striving for glory? The wizard Zoroastro urges Orlando to forget his beloved Angelica and return to the path of military virtue. But Orlando’s reluctant: he’d rather be an heroic lover than just start fighting again. The shepherdess Dorinda feels  very confused. When she sees Orlando protecting Princess Isabella from danger she begins to guess what her emotions might mean. Angelica, whose life Orlando once saved too, has meanwhile got engaged to Medoro. Angelica, with Dorinda’s help, nursed Medoro back to health and wants to return to her parent’s kingdom with him. Medoro, however, has to try and fend off advances from Dorinda, who has her eye on him too. Zoroastro warns Angelica about Orlando’s vengeance, if he finds out about her and Medoro. Angelica hopes Orlando might have lost interest in her by now. To find out if he still loves her she feigns jealousy and questions his feelings for her. Much to Angelica’s chagrin, Orlando responds by proving his unshakable love for her. Dorinda surprises Angelica and Medoro in an intimate embrace; which ruins her dream of a future with him. To apologise for their duplicity Angelica presents her with a valuable bracelet, which Orlando once gave her. Despite all attempts to console her, Dorinda is left with a broken heart. ACT 2 Orlando hears from Dorinda that Angelica’s cheating on him with Medoro. In a moment of shared grief Dorinda gives free rein to her heartbreak, while Orlando’s tormented by fantasies of revenge and suicide. Zoroastro urges Angelica and Medoro to flee, to save them from Orlando’s fury. With heavy hearts Angelica and Medoro say goodbye to their beloved woods: Medoro carves their names on a tree as a memento of their love. Orlando rushes in and finds the inscription, which renders him completely insane: he wants to have it out with Angelica, who manages to get away, with Zoroastro’s help. Alone, Orlando hallucinates himself into the underworld, where his anger takes on increasingly extreme forms. ACT 3 Dorinda tells Angelica about Orlando’s increasing madness. Tormented by feelings of guilt, Angelica expresses the hope that Orlando might finally overcome his irrational hatred. Dorinda has meanwhile discovered the insidious nature of love: it’s just one big mess, that brings more misery than happiness. Zoroastro announces that Orlando will be cured by an experiment: the wizard coerces Orlando to murder Medoro and Angelica, before revealing the fatal consequences of his madness. Visibly shocked, Orlando wants to kill himself. Angelica and Medoro, who survived, thanks to Zoroastro’s magical powers, restrain him. Orlando ends up by renouncing love and relinquishing his claims on Angelica. The others thank him and start singing the praises of love and glory.

A man at the end of his wits: was it just a »wind« called love that turned superhero Orlando’s head and catapulted his »marbles to the moon«?

Zoroastro warns Orlando to control his tantrums and tries to bring him back to his senses, which proves an extremely difficult task. An emotional cocktail of jealousy and hate, mistrust and misjudged self-assuredness has turned Orlando into a shadow of himself. The reason, his unrequited love for Angelica, who’s involved with Medoro, who lusts after Dorinda, whose lovesickness assumes less abnormal extremes. Orlando rants, fumes and rages; revealing himself in his violent fantasies as a deeply unhappy person, who has completely lost control.

In Ludovico Ariosto‘s Orlando furioso Handel found a promising story about the tortuous (mis)guided path of passions. The title hero’s madness gave him the chance to move away from conventions in music too: his innovative score throwing the form of opera seria out of kilter.

When Orlando starts hallucinating in the underworld and completely loses touch with reality, Handel invented radical, »crazy« musical ideas. Senesino, the star castrato in the world premiere, found the role very unconventional and couldn’t shake the feeling off that Handel was trying to make a fool of him. In addition to all kinds of virtuoso gems and touching portraits of characters, magical Orlando captivates with an ambiguity that manages to milk comic potential from tragic love madness.