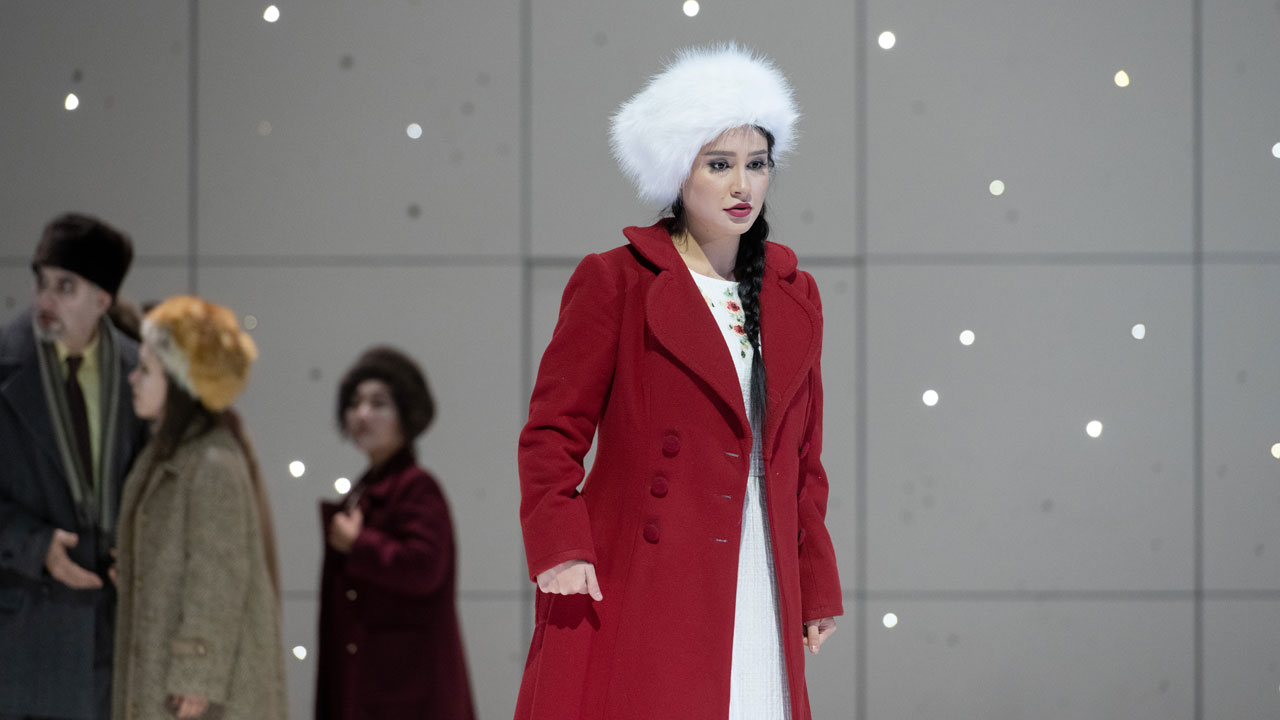 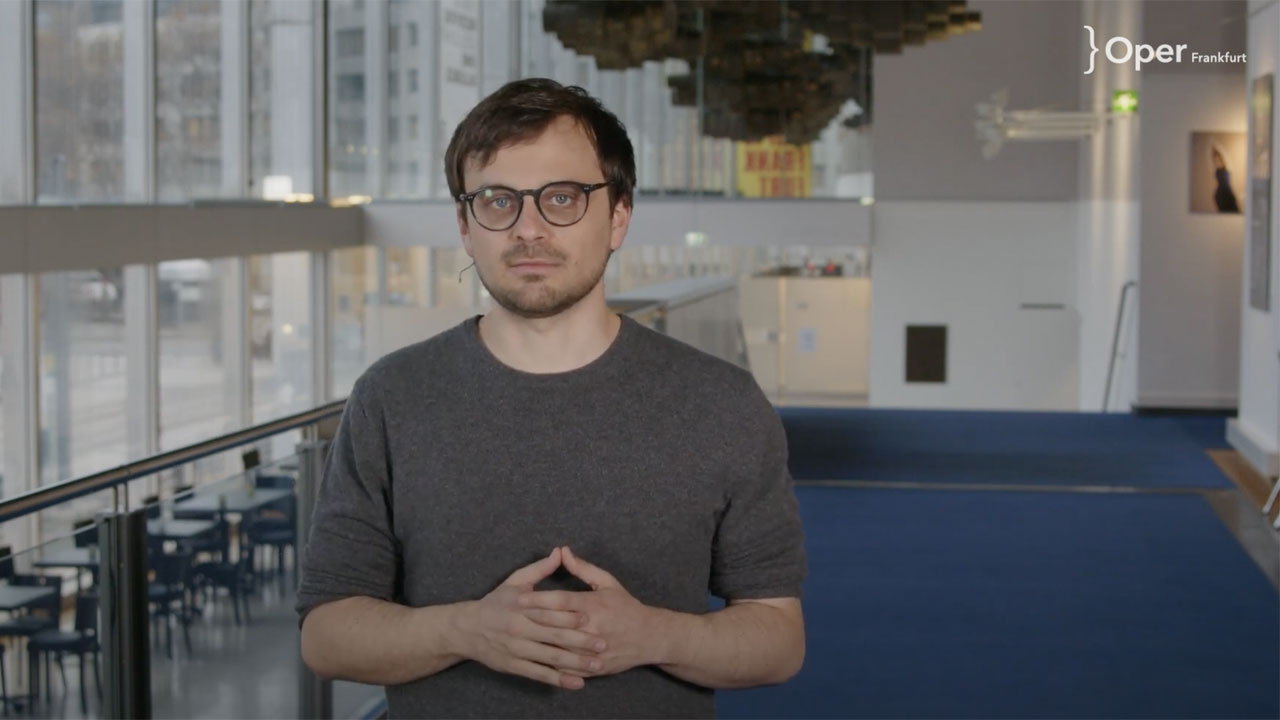 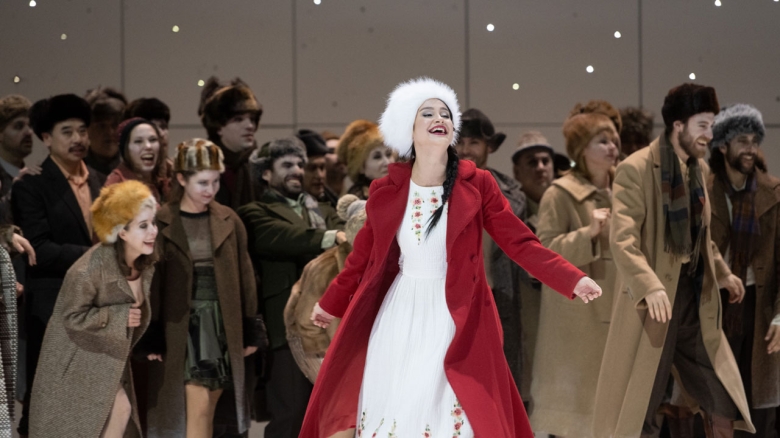 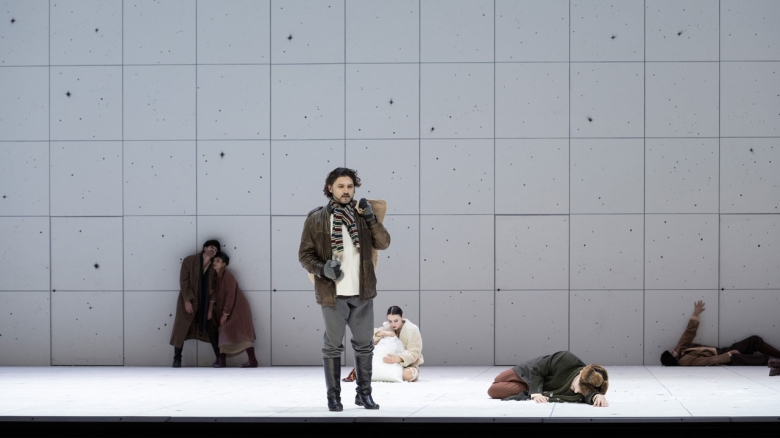 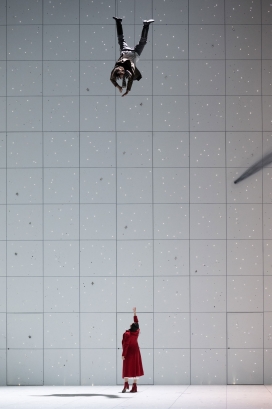 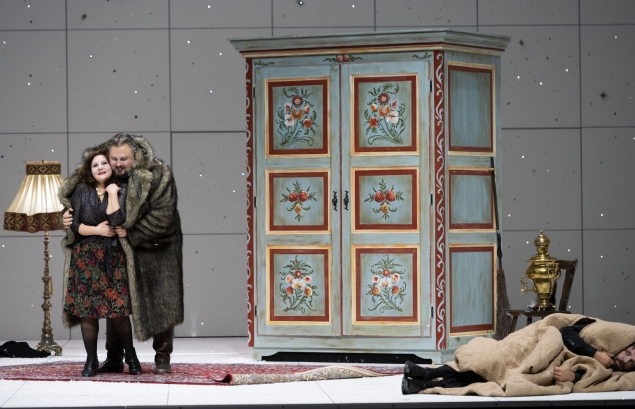 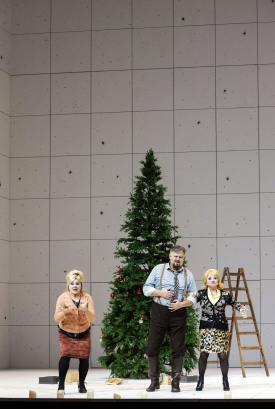 Opera in 4 acts
Libretto by the composer based on a story by Nikolai V. Gogol
First performed 1895, Mariinski Theater, St. Petersburg
A Frankfurt  first

Christmas Eve in the Ukrainian village of Dikanka. The Devil grumbles to Solocha about her son Wakula, a devout blacksmith who painted a timorous Devil on a church wall. People have no respect for the Devil and follow religious customs without knowing why, going from house to house singing carols in return for gifts. What happened to the fear of God and the Devil? There's some new gossip: Wakula's in love with beautiful Oksana, who usually spurns all men. Solocha, who's got her eye on Oksana's father Tschub's wealth, and the Devil want to stop him going to see Oksana. She flies off on her broom to steal the stars and the Devil pops the moon in his pocket. They trigger off snowstorms in the dark so people can't find their own houses. They intend to hold back the seasons too: so Owsen, the God of Spring, can't be reunited with Koljada, the virgin, and bring the solstice to the people. A lunar eclipse is taking place and Tschub, on his way to drinks at the deacon's with his friend Panas, gets lost. He bumps into Wakula, standing under Oksana's window: Wakula chases Tschub off, who decides to spend Christmas Eve with Solocha. Wakula talks to Oksana, who makes it clear she's not interested. When the village girls arrive to take her carol singing, she admires her friend Odarka's new shoes. Wakula promises to give her identical ones. But Oksana insists that he get her shoes like the ones the Tsarina wears, then she'll marry him. The girls mock Wakula: he'll never get the Tsarina's shoes or marry Oksana! ACT 2 Solocha and the Devil, back home after their unsuccessful mission  - they dropped the moon and stars, and Wakula went to see Oksana - are looking forward to an evening in, when someone knocks on the door. Its the Lord Mayor. The Devil climbs into a sack to wait until the visitor's gone, but the next admirer arrives: the deacon. Solocha hides the mayor in a sack and begins a flirtatious game with the cleric. More knocking: it's Tschub. The deacon, like it or not, must hide in another sack. Tschub and Solocha are having fun when another person knocks: Solocha's son, Wakula. The only place for Tschub to hide is the big sack with the deacon inside. Wakula, surprised by the mess, lugs the sacks away. People are celebrating, Wakula's not in the mood to join in, especially when Oksana publicly ridicules him by asking if he's been to see the Tsarina about her shoes. Enough's enough: he says goodbye to Oksana and his friends, forever. He leaves with just one of the sacks, unaware that the Devil's inside. The villagers pounce on the sacks imagining they contain delicious christmas goodies. But, one after the other, they find Oksana's father, the deacon and the Lord Mayor. Now everybody knows that all three wanted to spend the evening with Solocha. Solocha must be a real witch after all … ACT 3 Wakula can't stop thinking about Oksana. If he could bring her the damned Tsarina's shoes he might win her heart. He asks Pazjuk where he can find the Devil, and ask for help. Wakula, turning round, realises he's been carrying the Devil all the time. He brandishes a crucifix and orders the Devil to take him to the Tsarina. Flying through the air, Wakula sees nature battling for the solstice. Evil spirits are on the rampage, the virgin, Koljada, is looking for her springtime God and love. Just like him, ... and Oksana? Wakula reaches the royal court and mingles with a delegation of Zaporozhian Cossacks, who make their supplications in such a long-winded way that Wakula speaks up and asks the Tsarina for a pair of her shoes. The Tsarina, enchanted by the sincere young man, has her most beautiful shoes brought to him. She's almost sorry that Wakula already has a girlfriend ... Koljada is reunited with young Owsen. The sun rises, bells ring and people sing praises to the miracle of Christmas. ACT 4 Christmas morning Oksana feels guilty that Wakula might have done something to himself. Malicious women say that he hanged himself, drowned in the lake … Oksana bitterly regrets having toyed with Wakula. What a relief when the smith returns! He asks for Oksana's hand and gives her the Tsarina's shoes. She hugs him and says she'd have married him anyway. The whole village wants to know about his wondrous journey. But Wakula won't give anything away, saying a great poet will write a story about this extraordinary Christmas Eve one day. Christof Loy

Christmas in Dikanka, a village in the Ukraine: villagers go from house to house singing carols to celebrate the birth of Christ.  All except the blacksmith Wakula, who's down in the dumps because he's unhappily in love with the beautiful farmer's daughter Oksana. She'll only marry him if he brings her the Tsarina's golden shoes ...

Rimsky-Korsakov combined satirical-realistic portrayals of Ukrainian village life with all sorts of fantastic and mythological elements in his Die Nacht vor Weihnachten / Christmas Eve. The cosmos in his grotesque, crazy opera includes hypocritical officials and dignitaries, witches, devils, spirits of the air and sun gods. He waited ten years before setting Gogol's story to music – out of respect for Tchaikovsky, who turned the work into Der Schmied Wakula / Wakula, the Blacksmith in 1974. He didn't start composing until after Tchaikovsky died in 1893: the score is full of quotations from Ukrainian folk songs – including the villagers' carols, which intensify into polyphonic layers of sound. The composer makes the stars in the sky dance in fluorescent colours and Wakula's flight through the night air is almost cinematic.

Gogol's story is still very popular in Russia - not least because of the many films that have been made of it. Rimsky-Korsakov's version is far less known. Now Christof Loy's new production, and the first ever performances of the work of this rarity here, can be seen over the Christmas and New Year period in Frankfurt.