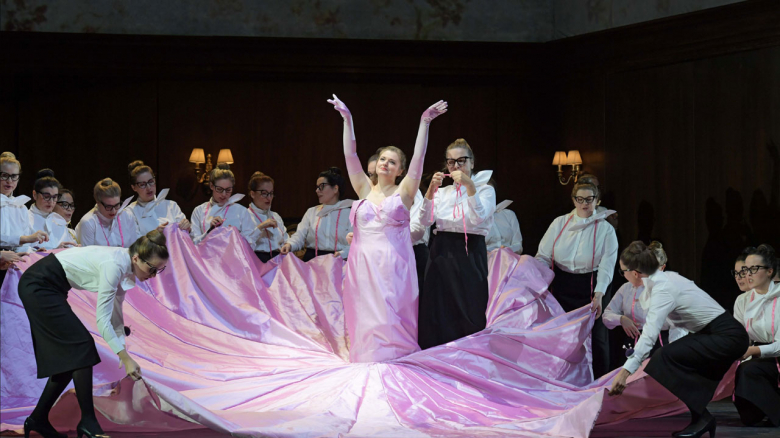 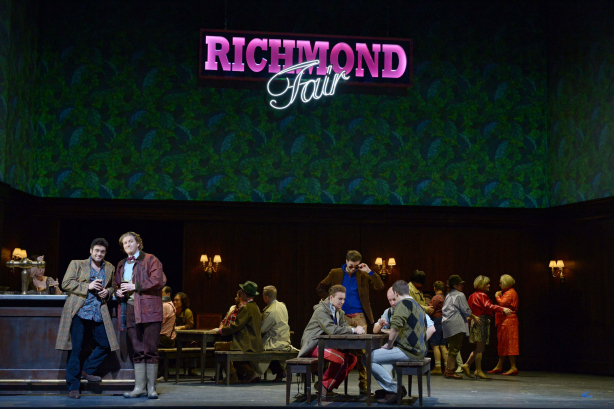 ACT I Lady Harriet, maid of honour to the Queen of England, is bored. Her assistant and confidante Nancy advises her to fall in love. Lord Tristan Mickleford, who's officially courting her, is clearly not a very promising candidate. The sound of girls singing on their way to Richmond Market gives Harriet an idea: she will mingle, incognito, with the visitors at the fair, Nancy and a reluctant Tristan must go with her. Richmond Market is lively. Plumkett and his stepbrother Lyonel, whose descent is unclear, are there too. A mysterious ring, which Lyonel inherited from his father, promises to rescue him if he should ever find himself in trouble. According to tradition, the rules of which are announced by the judge, girls are committed to an employer once they have accepted an advance on their wages. Harriet, Nancy and „farmer Bob“, alias Tristan, appear in folkloristic attire. Plumkett and Lyonel are immediately attracted to the two women. After plucking up courage to speak to them, everything moves quickly: the two women accept the money, just for fun; but find themselves committed to work as servants for a year. Tristan can't do anything to help: the judge seals the deal. ACT II All four are have arrived at the gentlemen's home – a somewhat provisional dwelling. The two women, calling themselves „Martha“ and „Julia“, are clearly unable to carry out any kind of domestic chore. When, at Lyonel's request, the Lady sings „The Last Rose of Summer“, he is lost: he immediately asks for her hand in marriage, which she turns down. Lyonel doesn't understand her mocking rejection. It's midnight, time for bed. Lord Tristan helps the women escape through a window. Lyonel and Plumkett can't catch them. interval - ACT III In the countryside, a few weeks later: Plumkett praises the merits of porter's ale. He then sees Nancy, who manages to get away from him with help from a group of loud girlfriends. Lyonel is bemoaning how much he suffers since the disappearance of his adored „Martha“ when he suddenly sees her: the Lady, taking part in a country outing for the nobility, has briefly distanced herself from her friends. Lyonel professes his love for her again, but she disowns him. When Lord Tristan and the other aristocrats get nearer she declares that Lyonel, who is insisting that she owe him an explanation, is mad. Lyonel is arrested. Deeply hurt, he gives his friend Plumkett his father's ring, in the hope that it really might save him. The Lady regrets her behaviour; she secretly loves Lyonel as much as he loves her. ACT IV The ring empowers the Queen to proclaim that Lyonel is the son of the Count of Derby, who was wrongfully banished and died incognito. Because of his aristocratic ancestry, nothing now stands in the way of a union between the Lady and Lyonel; she seeks him out and asks him to forgive her. But Lyonel cannot forget the way she insulted him, and refuses to take her hand. The Lady, now horribly aware of her snobbery, tries to think of a way to convince Lyonel of the sincerity of her feelings. Meanwhile, Nancy and Plumkett are hitting it off nicely. Lyonel is surprised to see the Lady, now as „Martha“ again, at a Richmond Market themed party. This time she gladly acknowledges him. So, they become a couple after all. Nancy and Plumkett complete the Happy Ending.

A hit from yesteryear comes up fresh as a daisy: This wonderfully received 2016 production of Martha (live recording available – OehmsClassics) proves how entertaining opera can be – and how the problems of figures on stage immediately touch the audience's heart. Martha is romantic and funny. In recent years this once very successful jewel had almost vanished from the stage. Unfairly! Its about things that are relevant today; because »Richmond Market«, which appears in the full name of the work, is nothing less than a marriage market. The jokes and emotions around the love stories between Lady Harriet Durham, the Queen's lady in waiting, and farmer Lyonel, unravel almost casually. They meet when the Lady, on a whim, and her confidante Nancy go off to market offering their services as maids and are forced to get to know each other better when Lyonel and his step-brother Plumkett take the two supposed maids »Martha« and »Julia« back to their farm. The resulting complications find eloquent expression in Flotow's music, which combines French elegance, Italian lustre and romance.