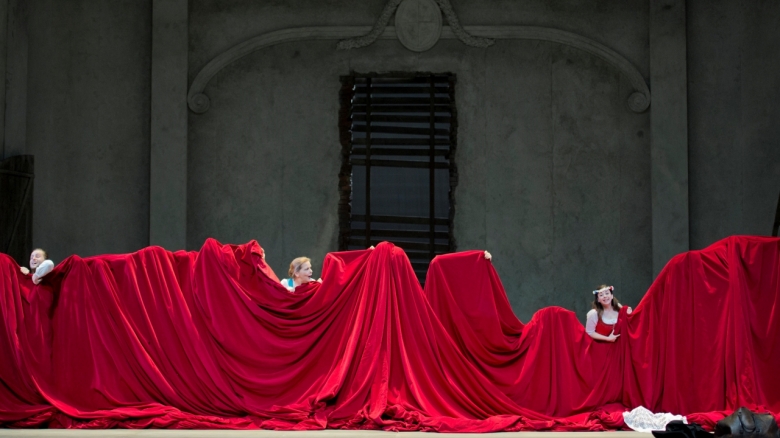 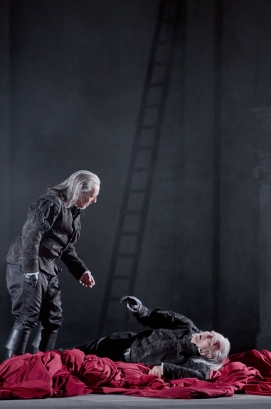 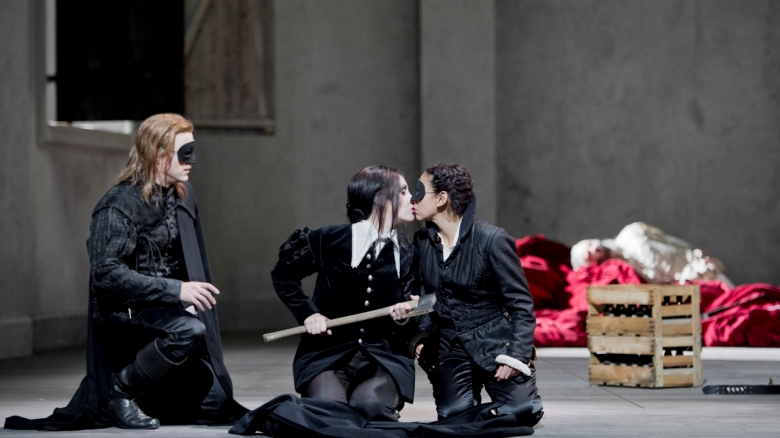 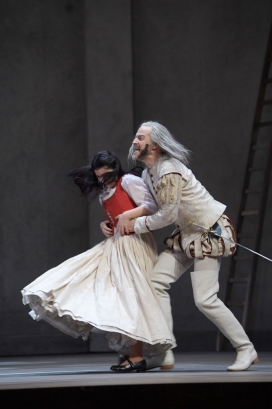 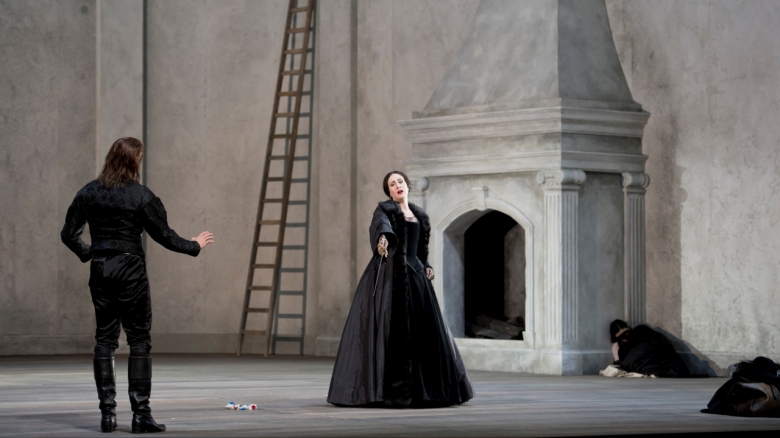 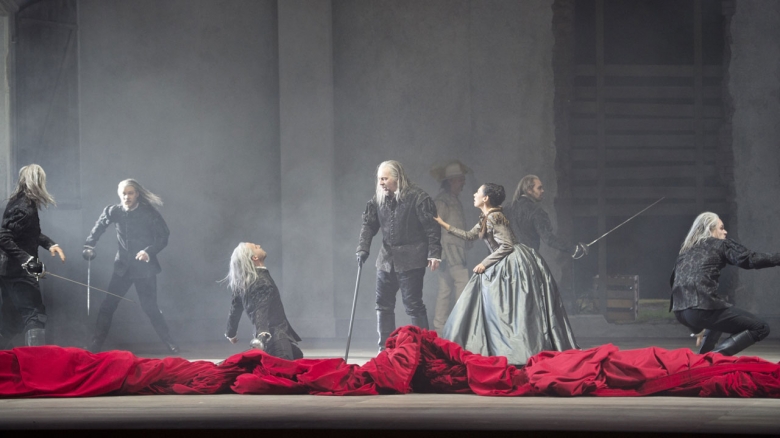 ACT I Seville, in the early hours of the morning. Don Giovanni forces his way into the Commendatore's house to overpower his daughter Donna Anna in her room. The father, hearing his daughter's screams, appears and is killed by Giovanni. Giovanni looks into the eyes of the dying man and flees. Donna Anna, who didn't get a good look at the intruder in the darkness, discovers her father's body. She demands that Don Ottavio, her fiancé, find the unidentified man and avenge her father's death. At the first light of dawn. Giovanni tries to forget about killing the Commendatore by throwing himself into a new amorous adventure. But the next woman to cross his path is Donna Elvira, a young aristocrat from Burgos, who he recently married and then deserted three days later. He flees again, leaving Elvira with his servant Leporello, who gives vent to his exasperation at his master's behaviour by explaining to the unsuspecting woman: Don Giovanni is a driven man, in Spain alone he has slept with 1003 women. The enumeration of Giovanni's conquests makes the young woman and Leporello feel quite giddy. Morning. Don Giovanni is now interested in Zerlina, a young country lass about to marry Masetto, a farmer's lad. Intending to indulge one of the privileges afforded to the aristocracy he orders Masetto to leave him alone with Zerlina. With infinite tenderness Giovanni gets closer to Zerlina, even promising her marriage. Zerlina is confused, even more so when Donna Elvira suddenly appears and asserts her rights to Giovanni. Donna Anna and Don Ottavio come to ask Don Giovanni to help them find the Commendatore's murderer. When Elvira intervenes again and Giovanni tries to stop her speaking, Donna Anna realises that he is the murderer. She confides in her fiancé and tells him about the assault in her room at night. She struggles with feelings of fear, anger and helplessness. Ottavio promises to do everything in his power to enable his beloved to find peace of mind again. Evening. Don Giovanni has ordered that a feast be prepared. Wine and women shall intoxicate him. The young couple Zerlina and Masetto have also been invited. Masetto, suspecting Zerlina of being unfaithful, is deeply hurt. She cannot convince him of the depth of her love for him. When Giovanni approaches her again, Masetto is livid with jealousy. Meanwhile Donna Anna, Donna Elvira and Don Ottavio, who have entered into a pact, have also received an invitation to the feast. They intend to wear masks to surprise Don Giovanni. They reveal their identities when Zerlina has difficulty fighting off Don Giovanni. But, once again, with his servant's help, he manages to escape. Act 2 A few hours later. Don Giovanni feels slightly uneasy after this lucky escape. He orders Leporello to swap clothes with him. They meet lovesick Elvira, who has dropped the role of avenger and now seeks only one thing: love. She embraces Leporello and is caressed by Giovanni's voice. Her senses diminish and she disappears into the darkness with a man also longing for love: Leporello, enveloped in Giovanni's black cloak. Giovanni is also driven by desire, but is alone. He only meets people who want to kill him. Masetto has mobilised his friends to find Giovanni, beat him to the ground and quarter him. Giovanni manages to pass himself off as Leporello and separates the gang by sending them off in different directions. Left alone with Masetto, he beats him up. Zerlina finds her completely terrified and shamefaced bridegroom. She convinces him that she loves him and nobody else. Masetto cannot believe his luck. After midnight. Leporello does not want to continue playing this game with Elvira and vanishes; but his attempt to escape is foiled by Masetto, Zerlina, Don Ottavio and Donna Anna. They take him for Don Giovanni and intend to execute him. He reveals his true identity and their confusion is heightened when they realise that Elvira has spent a night of love with the »fake« Giovanni. Only Zerlina is absolutely determined to bring Leporello to justice instead of Giovanni, who now seems to them to be becoming almost a figment of their imagination. Masetto, however, feels sorry for Leporello and lets him get away. Elvira now feels compassion for Giovanni. She, who betrayed herself this night, senses that she will leave Giovanni. Shortly before two in the morning. Giovanni has retreated to a nearby graveyard. Here, in front of a statue of the Commendatore, he swaps clothes again with Leporello. He orders his servant to invite the Commendatore, whose voice both think they have heard, to a late banquet. When Giovanni looks the Commendatore in the eye he is gripped by terror and leaves the graveyard. Donna Anna fearfully relives the memories of last night, but Ottavio assures her that he will stay by her side. She can cautiously imagine having a future with him, to touch a man without fear and be touched by him. Just before daybreak. Giovanni is waiting for the Commendatore. Elvira senses that he needs her and doesn't want to leave. The Commendatore appears and asks Giovanni if he regrets the way he has been living his life. Giovanni refuses to bow to anyone, or the next world, but realises that he cannot escape death. Sunrise. Don Giovanni's pursuers appear, to have him arrested. Leporello reports that his master has disappeared again. The devil came to get him. The survivors try to understand what has happened during the last 24 hours and grasp what roles they played in this game of life and death.

Driven by insatiable desire Don Giovanni, who in Chrisoph Loy''s production is no longer the spring chicken he once was, rushes from one adventure to the next. The book of his conquests lists 2065 seduced and abandoned women. Giovanni's promises of satisfaction, happiness and love are apparently irresistible. But things start going wrong for him in Mozart and Da Ponte's masterpiece. The Commendatore foils his attempt to seduce his daughter Donna Anna, and is killed by Don Giovanni in a duel. This is the start of a 24 hour hunt for the lecher, during which he plays people off against one another – and the moment when he senses his own mortality. This sex addict, but desperately lonely antihero, this troublemaker in the normal way of things, has to come to terms with his powerlessness against the Commendatore's ghost who seems, quite literally, to hold up a mirror to him.