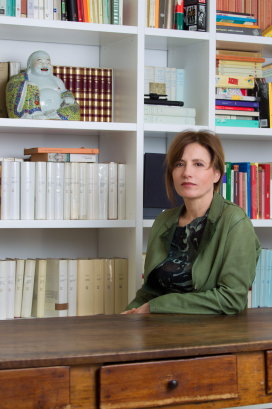 This workshop concert (at Oper Frankfurt, not the University for Music) is dedicated to Lucia Ronchetti. The world premiere of her opera Inferno (commissioned by Oper & Schauspiel Frankfurt, which was to have taken place last month) is planned for June 2021. Tickets cost €18 and are only available online from 10am June 1 - link on this page will not work before then!

Ronchetti, one of the leading Italian composers today, presents three of her own works. Cartilago auris, magna et irregulariter formata is for a concert grand that sounds as it would have done to Beethoven. It is played by a pianist and two other musicians who create interesting sounds on the strings. They represent Dr. Johann Wagner and the pathologist Carl von Rokitansky, who examined various composers on March 27 1827 to try and find out why they went deaf. In Le Palais du silence the composer takes up a work which Debussy planned, but never composed. There is a double meaning, to track down the sound of silence: the deathly stillness, which rules in the palace in the title which is destroyed by the intruding sounds of nature, and the silence of the non composed work. In Rosso pompeiano instrumentalists take on the role of travelling tradesmen in squares in Naples. The title embraces the ochre colour houses in ancient Pompeii were painted with.