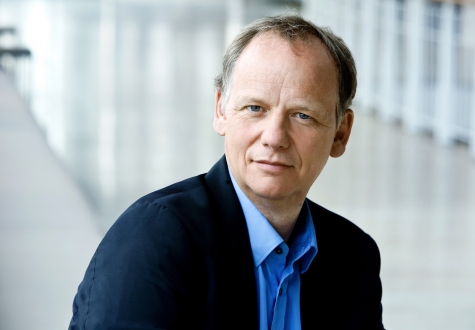 Anselm Weber has been running Schauspiel Frankfurt since 2017/18. He started his Intendanz with Segher’s Das siebte Kreuz / The Seventh Cross which was followed by Miller‘s All my sons, George Brant’s Grounded, Ayad Akhtar’s Invisible Hands and Furor by Lutz Hübner and Sarah Nemitz. He has also directed Stimmen einer Stadt / Voices of a City, a now nine part series of monodramas written especially for Frankfurt. He was Intendant of the Schauspielhaus in Bochum from 2010 after holding the same post at Schauspiel Essen from 2005 - 2010. During this time he also worked regularly at Oper Frankfurt: Katja Kabanová was followed by Tiefland, Die tote Stadt / The Dead City and Weinberg’s Die Passagierin / The (female) Passenger. The first opera he directed was Rigoletto at the Aalto-Theater in Essen in 1999, which was followed by Lohengrin, Die Meistersinger von Nürnberg, Der Rosenkavalier, Siegfried and the world premiere of Christian Jost’s Die arabische Nacht / An Arabian Night (text by Roland Schimmelpfennig). Anselm Weber also worked as house director of Schauspiel Frankfurt and the Schauspielhaus in Hamburg, and has directed at the Burgtheater and Volkstheater in Vienna, the Residenztheater and Kammerspielen in Munich and the Deutsche Theater in Berlin.