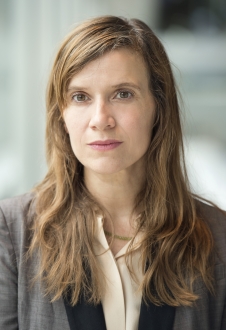 Katrin Lea Tag works almost continually with Barrie Kosky, with whom she created two unforgettable productions for Oper Frankfurt: this Dido and Aeneas / Herzog Blaubarts Burg / Bluebeard's Castle double bill and Carmen – which was seen at Covent Garden in 2018. Now they are back for Salome. Their hugely successful productions at the Komische Oper Berlin have included Der Jahrmarkt von Sorotschinzi / Sorotschinzi Fair, The Monteverdi – Trilogy, The Bassarids and Hoffmanns Erzählungen / The Tales of Hoffmann. She also designed sets and costumes for Kosky productions of Handel's Saul at the Glyndebourne Festival, Castor and Pollux at English National Opera in London, Armide at the Nationale Opera Amsterdam and Aus einem Totenhaus / From the House of the Dead at the Staatsoper in Hannover (2009 Theaterpreis DER FAUST). Katrin Lea Tag has also worked with Claus Guth (Jephta in Amsterdam, which is going to Paris) and Hans Neuenfels (Ariadne auf Naxos at the Staatsoper Berlin). She designed costumes for Dimiter Gotscheff's Iwanow (Theatertreffen – a big honour - 2006) and Das große Fressen/The Grande Bouffe at the Volksbühne in Berlin. She also works regularly with Michael Thalheimer, at theatres including the Staatsoper Berlin, Deutsche Theater Berlin, the Burgtheater in Vienna and Schauspiel Frankfurt. She studied at the Academy of Fine Arts in Vienna and won 1st prize at the 1997 Graz »International Competition for Direction and the Stage« and was nominated for »Best Designer« at the 2019 International Opera Awards in London.