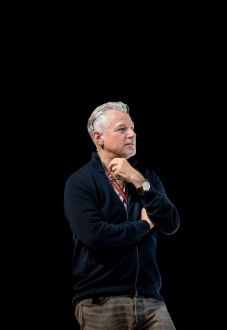 Christof Loy is one of the most sought-after directors in the world. He was voted »Director of the Year« in 2003, 2004 & 2008 by critics from Opernwelt magazine. His Così fan tutte in Frankfurt won the 2008 FAUST-Theaterpreis and hisTristan und Isolde at Covent Garden in London won the 2010 Laurence Olivier Award. The DVD of his Lulu was nominated for a Grammy in 2011 and his Peter Grimes at the Theater an der Wien recently won an International Opera Awards for »Best New Production of 2016« and  »Director of the Year 2017«. His many productions for Oper Frankfurt have included Die Entführung aus dem Serail, Wozzeck, Norma, Don Giovanni (revival opens May 2023!), Scartazzini's Der Sandmann (first seen at Theater Basel), Wozzeck (which was also seen at Oslo Opera) and an online evening of Tchaikovsky Lieder: Nur wer die Sehnsuch kennt. Last season he enjoyed triumphs here with this production of Rimsky-Korsakov's The Night before Christmas (»Performance of the Year« Opernwelt magazine 2021/22) and Giordano's Fedora. Recent productions have included Humperdinck's Königskinder at De Nationale Opera in Amsterdam, Schreker's Der Schatzgräber / The Treasure Hunter at the Deutsche Oper Berlin, Salome at Finnish National Opera, Verdi's Luisa Miller in Glyndebourne, Zandonais Francesca da Rimini at the Deutsche Oper Berlin, a Schubert evening, Eine Winterreise, at Theater Basel, Dvořák's Rusalka at the Teatro Real de Madrid, Leoncavallo's Zazà at the Theater an der Wien, and Mozart's Cosí fan tutte and Puccini's Il trittico at the Salzburg Festival. Conductors with whom he works regularly include Antonio Pappano, Ivor Bolton, Ingo Metzmacher Marc Albrecht and Sebastian Weigle.