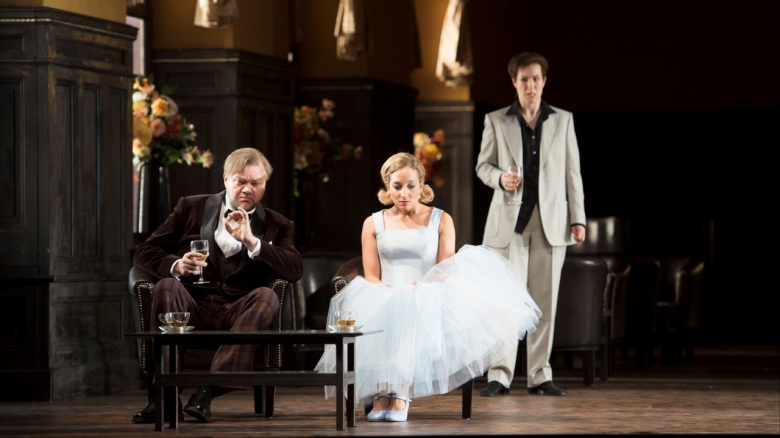 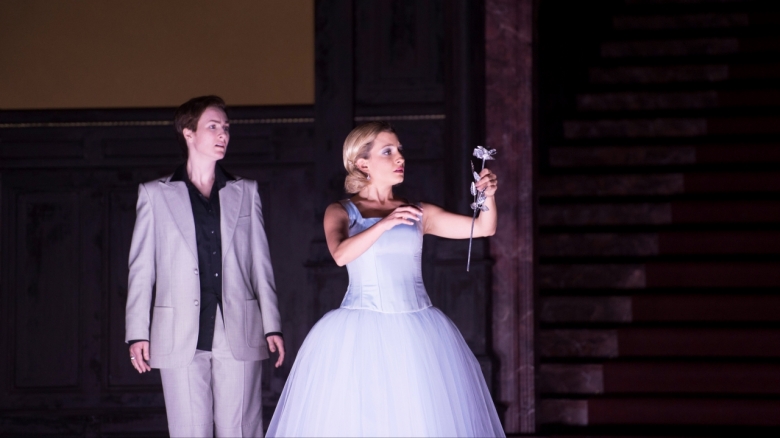 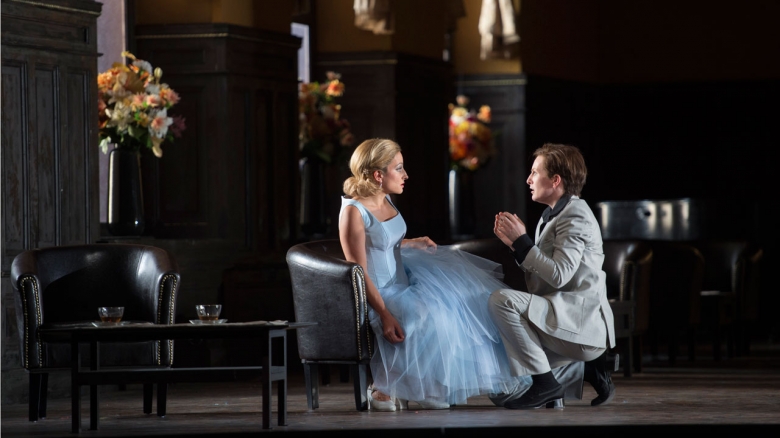 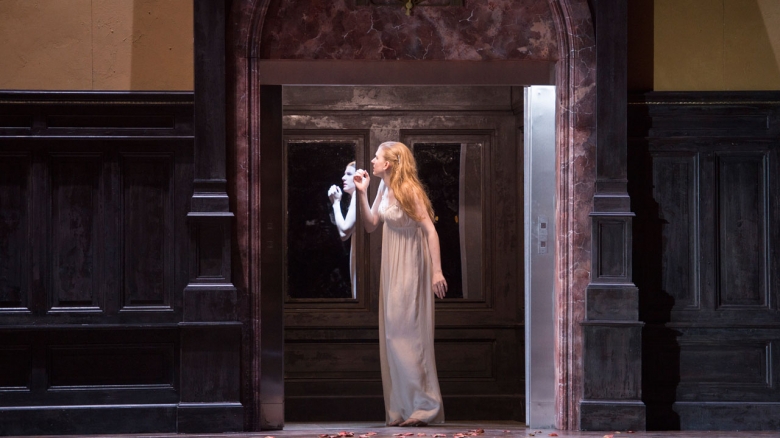 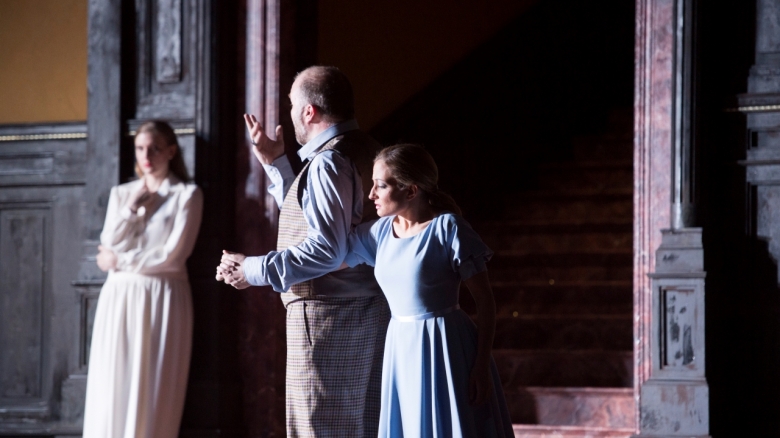 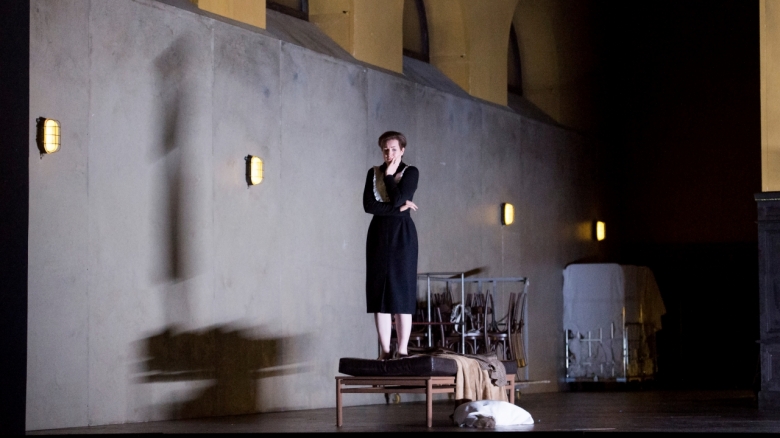 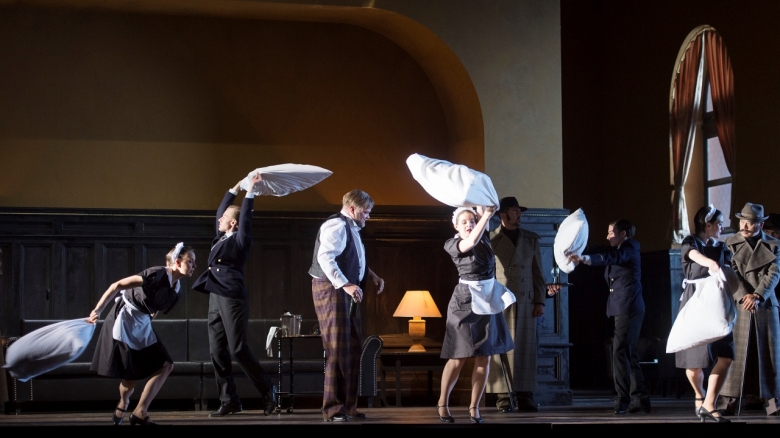 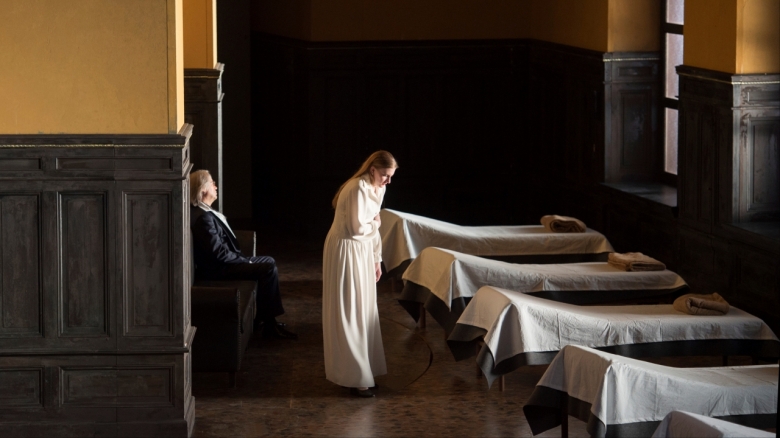 Act I Feldmarschallin Fürstin Werdenberg took advantage of her husband's absence by spending the night with her lover, the young Graf Octavian Rofrano. A lot of noise is heard outside in the early morning. Worried that the Fürst has come home, she makes Octavian hide. But it's Baron Ochs auf Lerchenau, one of the Marschallin's distant relatives, who has gained entry. Octavian, unable to leave unnoticed, disguises himself as a maid, pretending to be a shy country girl, to whom Baron auf Lerchenau is immediately attracted. The Baron intends to marry Sophie, daughter of the wealthy Herr von Faninal, and asks the Marschallin to nominate a suitable candidate to deliver the traditional silver rose, a token of their engagement, to Sophie. He continues making improper suggestions to »Mariandel«, which the Marschallin notes with amusement. The Marschallin suggests that Octavian could be the Rosenkavalier. When Ochs sees a picture of him he's startled by his similarity with »Mariandel«, who has at last been able to escape the Baron's blatent passes by admitting those waiting outside for the levee to begin. The turbulent morning reception runs its normal course. When it's over, and the Marschallin is alone, she's overcome by melancholy. She senses the relentless passing of time and knows that she is powerless to slow it down. Even Octavian, no longer disguised as »Mariandel«, is unable to comfort her, quite the reverse, in fact: the Marschallin knows that, one day, he will leave her for someone younger. Act 2 Faninal takes his leave from his daughter so that – as custom demands – she can receive the Rosenkavalier alone. The Leitmetzerin (duenna) anticipates his arrival with excitement. The solemn presentation of the rose is the beginning of Sophie and Octavian's love. When Sophie is introduced to her future husband she is horrified by his crude manners. Octavian, livid with rage, sees how blatently Ochs auf Lerchenau makes it clear to Sophie how he intends to assert his rights as a husband. While the Baron is signing the marriage contract in an adjoining room, Sophie and Octavian proclaim their love. They are overheard by Annina and Valzacchi, a scheming couple who immediately raise the alarm and call for the Baron. When Ochs tries to force Sophie into the next room to sign the marriage contract, Octavian wounds him slightly. Complete chaos ensues. The Baron, relieved that the wound is not serious, soon feels contented again, even more so when Annina hands him a note from »Mariandel«. Octavian is the mastermind behind this trick. He secured Annina's services to ensure that the Baron would receive an invitation to a rendezvous. Act 3 Octavian, with Annina and Valzacchi's help, has prepared everything for the trap set for the Baron. His tryst with »Mariandel« can begin. Octavian is so good at playing the flirtatious maid that the besotted Baron doesn't notice how dangerously the net is closing around him. Ochs is so unnerved by things going on around him that he calls for the police. But this makes his situation even worse: the police commissioner who appears suspects that the Baron has seduced a respectable young woman. Ochs then passes »Mariandel« off as his fiancée, Sophie von Faninal. Faninal, unaware that has been given a role in this comedy, is summoned, with Sophie. He is outraged by the scandalous behaviour of his future son-in-law. The Marschallin arrives, sums up the situation immediately and delares that it is all a farce. She makes it very clear to the Baron that he has lost the game and must give up all hope of marrying Sophie. Ochs takes his leave, accompanied by mocking calls from the crowd. Octavian stands, helpless, between the Marschallin and Sophie.

»Time, is a strange thing«, sings the Marschallin. These words rarely sound such a tragic note as they do in Claus Guth's production. He summons up bitter sweet reflection about life and death in Strauss and Hofmannsthal's masterpiece. »There's more about the past in the present than one can guess«, wrote Hofmannsthal about his comedy for music. His profound, yet light-footed Der Rosenkavalier is about wanting to hold on to the present and letting go of a love (and life) that has run its course, overlapping with the start of a new love. The turbulent story starts with the noisy entrance of Baron Ochs auf Lerchenau, who is hellbent on living out his erotic desires. He allows himself to be deceived by the androgynous charms of young Octavian when he slips into the role of the chambermaid Mariandl, to keep his relationship with the Marschallin secret. In the end the Baron stands there, duped. How far will Octavian and Sophie's love take them?