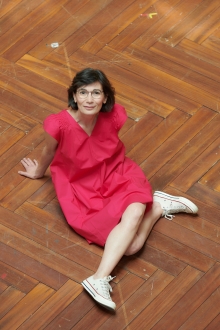 Deborah Einspieler has been working as a dramaturge at Oper Frankfurt,  where she co-founded, and has been running the Education Programme JETZT, since 1999. Her Operas for Children, which are regularly seen in schools in the Rhein Main Region, have also been performed at the Salzburg Festival, the Schloss Concerts in Weilburg, the Mozartfest in Würzburg, the Stadttheater in Gießen and, in 2020, the Stadttheater in Aschaffenburg. Deborah Einspieler has written books for children and been patroness of Frankfurt's Stadtbücherei's Young Media Jury since  2007. Im June 2013 her version of Rossini's Der Barbier von Sevilla for children won the audience prize at Hessen's Theatertage. Born in Italy, she studied German and Romance language and literature in Frankfurt am Main and theatre in Florence.