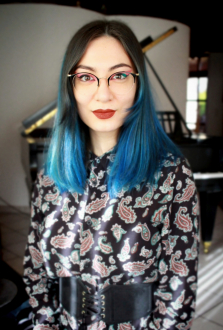 Aileen Schneider joined Oper Frankfurt as a director's assistant and to rehearse revivals in 2020/21, a position she held at the Staatstheater in Augsburg from 2017 - 2020, where she directed Philip Glass‘ In der Strafkolonie / In the Penal Colony, based on Kafka, Martin Zels' children's opera, Die große Wörterfabrik /The big Word Factory and created a musical-theatrical version of August Strindberg's Gespenstersonate / Ghost Sonata. She graduated from the HfMT in Hamburg in 2016 with a production of Viktor Ullmann's Der Kaiser von Atlantis. Whilst still a student she directed Philip Glass' The Sound of Voice at the Hamburg State Opera's Opera Stabile and participated, as a composer and musician, in Schorsch Kamerun's Die Disparate Stadt at the Schauspielhaus in Hamburg. A Masefield scholarship from the Toepfer Foundation enabled her to develop Chopin im Spiegel / Chopin in the Mirror, a biographical concert performance. Aileen Schneider started having piano, saxophone and singing lessons when she was a child. The YAMAHA Music Foundation awarded her a three year composition scholarship, she was the youngest candidate, in 2001 and she won a prize at Jeunesse musicales' National Composition Competition in 2011.