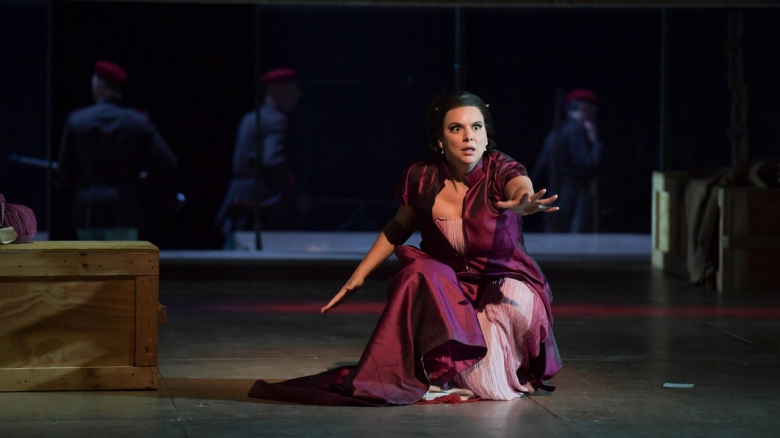 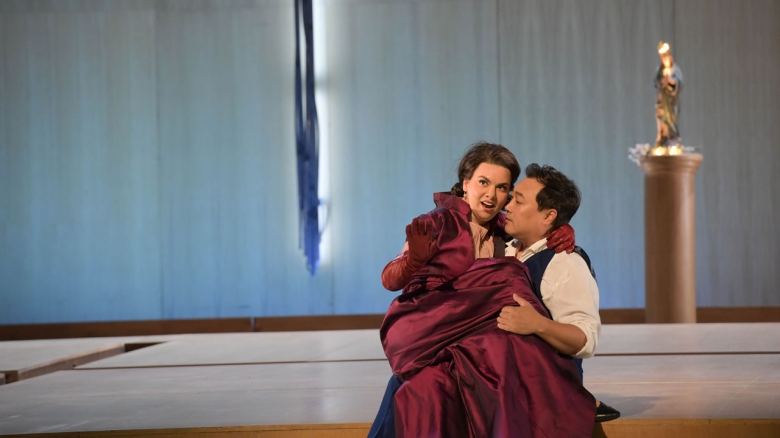 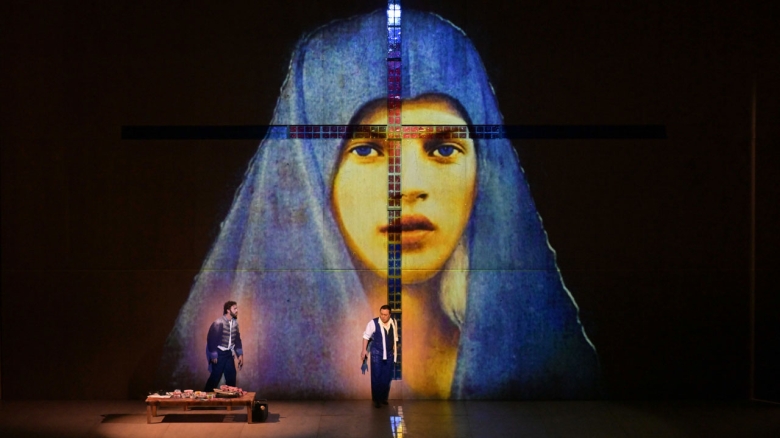 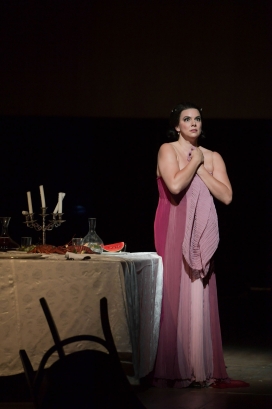 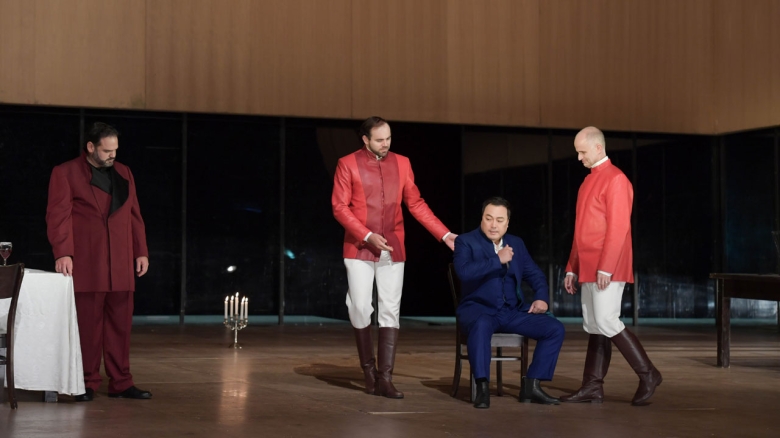 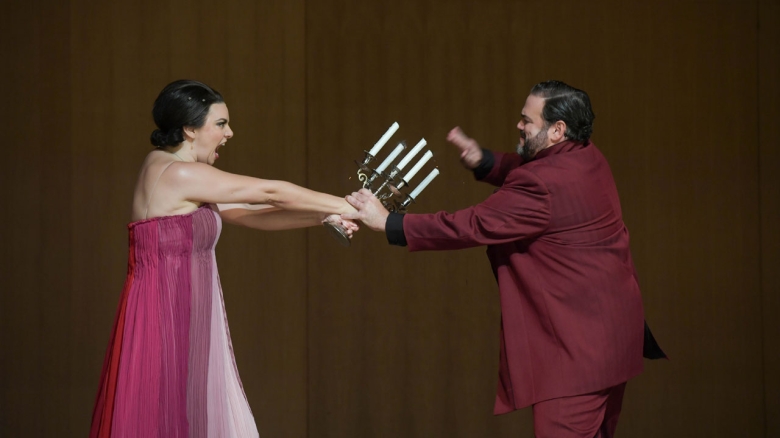 June 1800, Sant’ Andrea della Valle, Rome. A man bursts in and eventually finds a hiding place that's been prepared for him in the Attavanti family chapel. The sacristan brings brushes, paints and something to eat for Mario Cavaradossi, who's working on a painting of Mary Magdalen. The sacristan thinks he recognises a woman he's seen praying in church recently in the saint’s features; Cavaradossi says he's right and broods on the different manifestations of feminine beauty: blonde Countess Attavanti (Angelotti’s sister) and his black-haired lover, the opera singer Floria Tosca. The fugitive, thinking he's alone, emerges. Cavaradossi sees that it's Angelotti, consul of the overthrown Roman Republic, and offers his help. But Floria Tosca bangs on the church door. Cavaradossi, not wanting to take risks, decides not to let her know about the prisoner’s escape. He tells Angelotti to hide again and gives him the basket of food. Tosca suspects that Cavaradossi's been meeting another woman; he tries to assuage her jealousy. She suggests they spend the evening together after her performance at that evening but his thoughts are elsewhere, and his lukewarm reaction rekindles her jealousy. She recognises Attavanti’s face in the painting and feels that her suspicions are justified. Cavaradossi manages to calm her down and persuades her to leave; she demands he paint Mary Magdalen’s eyes black. Cavaradossi gives Angelotti directions to a hideaway. The boom of a cannon announces that Angelotti’s escape has been discovered. There's no time to lose; Cavaradossi will take Angelotti home, where the Republican can find refuge. The sacristan brings news of the Austrians’ victory over Napoleon and orders that preparations be made for a celebration. The choristers rejoice. Baron Scarpia enters with his thugs and is outraged about the disorder in the church. The intimidated sacristan's questioned; the secret police find Angelotti’s clothes, the empty basket and a fan belonging to Attavanti in the chapel. Suspicion falls on Cavaradossi. Tosca returns; she can't meet her beloved later because she's to sing at the celebrations. Scarpia feeds the flames of her jealousy by saying he found the fan on the painter’s scaffolding. Tosca hurries to Cavaradossi’s house, unwittingly leading Scarpia’s spies to Angelotti's hiding place. Scarpia indulges in fantasies of lust and power while the choir sings. ACT IIPalazzo Farnese. Scarpia has sent for Tosca. The police informer Spoletta reports that the search for Angelotti was futile. Cavaradossi was arrested and brought in for interrogation, but he's giving nothing away. A celebratory cantata, with Tosca, can be heard through the window. Scarpia orders that Cavaradossi be tortured. Tosca enters just as the painter's being taken away; Cavaradossi begs her to say nothing. She assures Scarpia that her jealousy was unfounded. She's horrified when Scarpia tells her that her lover's being tortured. Cavaradossi manages to remind Tosca to say nothing, but she can’t bear hearing his cries of pain any longer, and tells Scarpia where Angelotti's hiding. Cavaradossi's brought in unconscious. Scarpia sends Spoletta to get Angelotti. Sciarrone brings the surprising news that reports about the battle near Marengo were misleading, the battle turned and Napoleon was victorious. Cavaradossi errupts in jubilation with is remaining strength, provoking Scarpia; he's led away, his fate seems sealed. Tosca tries to negotiate a »price« for Mario’s release with Scarpia, who's known to be corrupt; but, to her horror, Scarpia demands physical remuneration instead of money. Tosca realises she's got no choice. She reflects on her life and artistry. Spoletta reports that Angelotti has killed himself. Scarpia forces Tosca to decide; she agrees to the deal. Scarpia orders that Cavaradossi be subjected to a sham execution by firing squad, and writes a permit for Tosca and the painter to leave the city after the feigned execution. When Scarpia attempts to embrace her, Tosca makes a lightning decision, grabs a knife from the table, and stabs him. ACT III The Castel Sant’ Angelo's roof. The song of a young shepherd is heard. Mario hands over his last possession to a prison warder in order to be allowed to write a farewell letter to Tosca. His last thoughts are only about her. Tosca brings news about the feigned execution and describes how she murdered Scarpia. Both vacillate between apprehension and hope. Tosca tells him he must play dead after the shots have been fired, until the soldiers have left. The firing squad shoot, and Mario falls. As agreed, Spoletta stops the sergeant from giving him the coup de grace. But, when all have gone, Mario doesn't move. He really has been shot. Soldiers hurry to the platform: Scarpia’s body has been found, Tosca obviously his murderer. Before she can be seized she leaps from the castle to her death.

Giacomo Puccini was inspired to write his opera after seeing Sardou’s play during the winter of 1889 in Milan. The piece gripped him even though, not speaking French, he hadn’t understood a word. He was involved in writing the libretto, which is true to the original, with Luigi Illica and Giuseppe Giacosa. The world premiere took place in 1900 in the Teatro Costanzi in Rome and was a flop, probably because of a threatened bomb attack during the performance. Political turmoil, an oppressive social situation in northern Italy’s industrial cities and an assassination attempt on King Umberto I in July 1900 ensured that the success of Tosca, particularly abroad, was slow to catch on. A famous singer, sought-after painter and Rome‘s sadistic chief of police get caught up in a tangle of love, jealousy, desperation, torture and murder. Andreas Kriegenburg staged the historically accurate, in the space of 24 hours, action as an exciting thriller, dealing with the heart-rending tragedy in a realistic way.