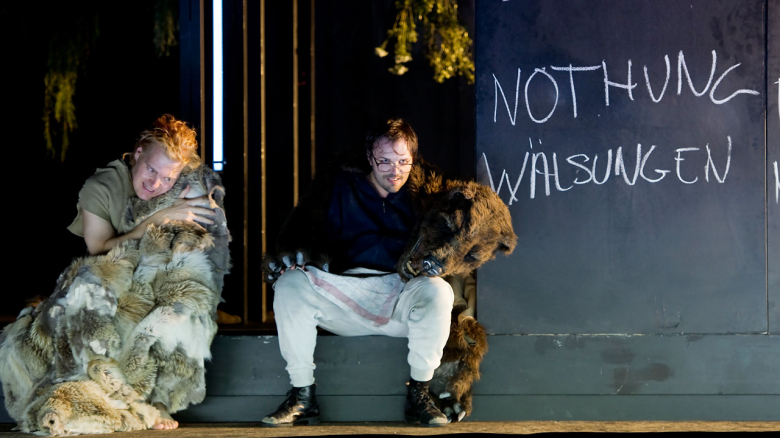 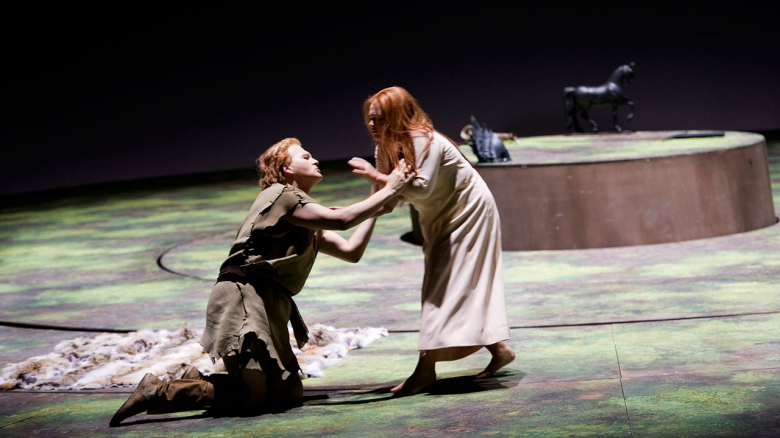 Siegfried, Siegmund and Sieglinde’s son, has been brought up by Mime who is trying to forge a sword strong enough for Siegfried to kill Fafner, who turned himself into a dragon to guard his treasure, so that Mime can get his hands on the Ring. Wotan is roaming the world as a Wanderer. After a knowledge competition with Mime, who loses, he tells him that only a man who has never learnt what fear is can mend Siegmund’s sword, Nothung. Siegfried mends his father’s broken weapon and kills Fafner. After coming into contact with the dragon’s blood he can understand what birds say, one of whom tells him to take the Ring and Tarnhelm and not trust Mime, who he kills when he tries to trick him into drinking poison. The bird tells him about Brünnhilde asleep on a rock and they set off to find her. Wotan wakes Erda and asks her how he can change the fate of the gods. When Erda finds out that their daughter has been deprived of her divinity and is sleeping surrounded by a ring of fire, she keeps silent – for her he is no longer the ruling god he claims to be. Wotan tries to prevent Siegfried from reaching Brünnhilde but Siegfried, believing him to be his father’s enemy, breaks his spear with his sword. Siegfried strides through the ring of fire and wakes Brünnhilde with a kiss. She sees the fateful ring on his finger and is frightened that she is no longer able to save him from Wotan’s plans of distruction. He is insistant and she eventually gives into her desires. Their joy is ecstatic.

The dragon Fafner guards the Nibelung’s hoard, including the Ring which bestows immeasurable power. The dwarf Alberich cast it from the gold he stole from the daughters of the Rhine. Now he wants it back. But his brother Mime wants to get his hands on the treasure too. But only one man can slay the dragon: Siegfried. Mime raised him after his mother Sieglinde died in childbirth. To fight the dragon he needs his sword, Nothung, which the God shattered into pieces. Mime tries in vain to weld it together again. Wotan, journeying through the world as the Wanderer, tells him why: only someone who has never learned what fear is, can mend the sword. How Siegfried kills the dragon and what the Forest Bird tells him about Brünnhilde is told in part three of Richard Wagner’s Tetralogie. Das Rheingold and Die Walküre were programmed in recent seasons and are now being followed by Siegfried – all four works will be performed again in cycles in a later season.