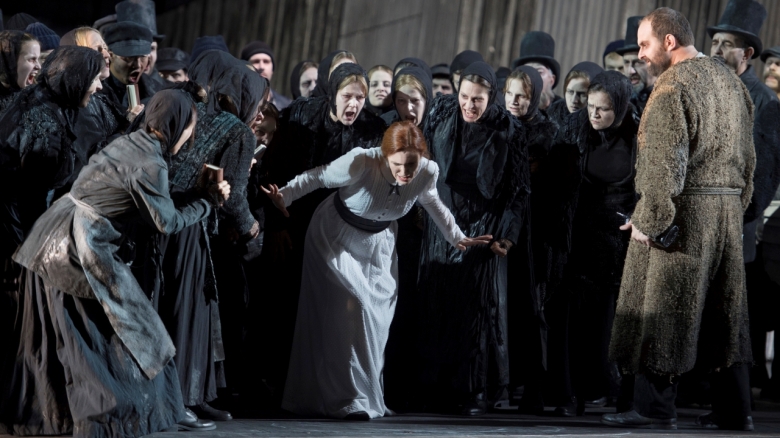 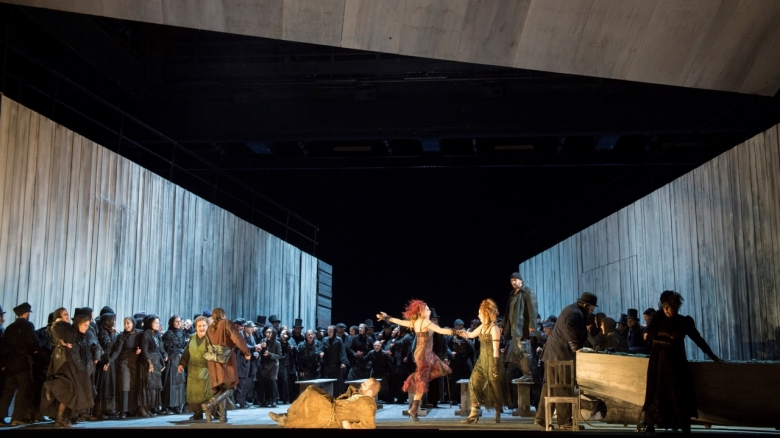 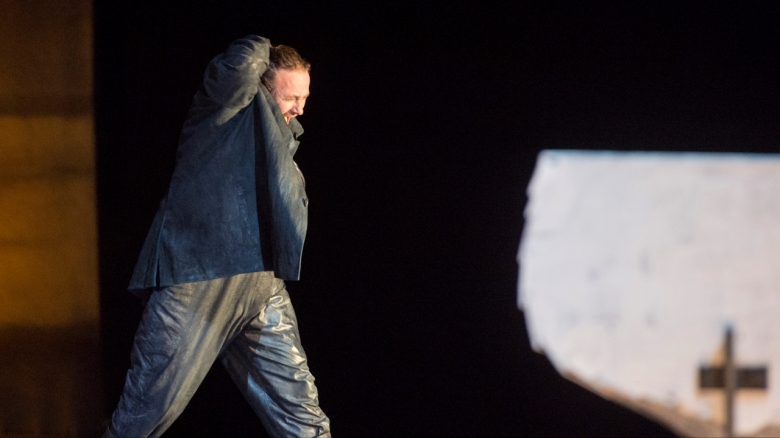 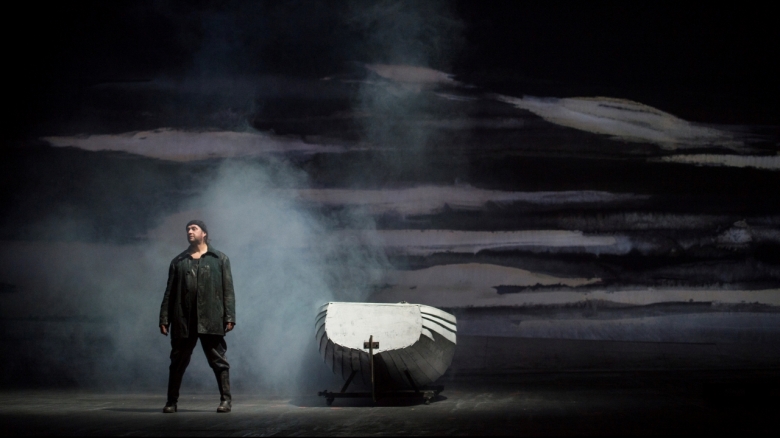 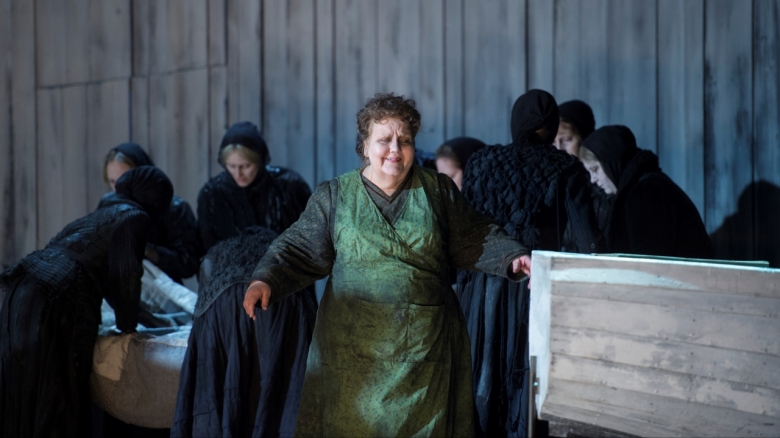 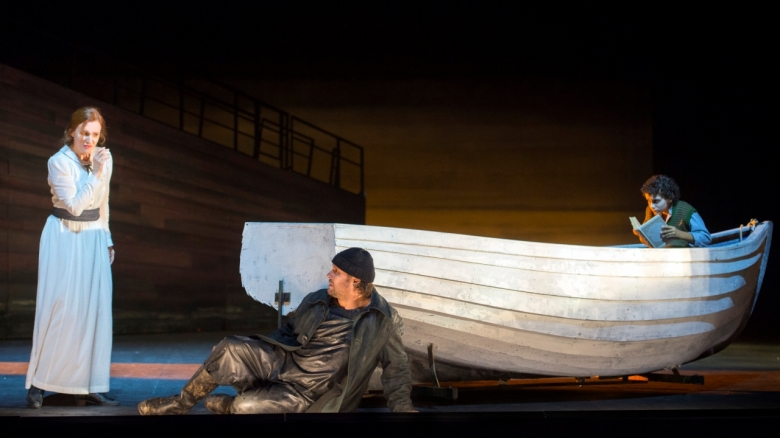 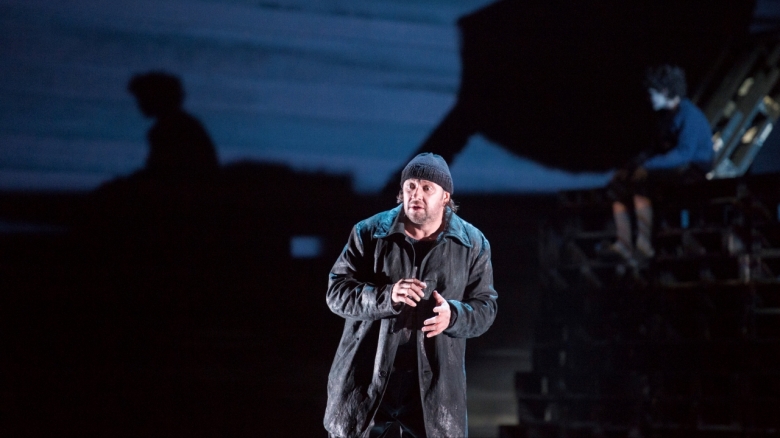 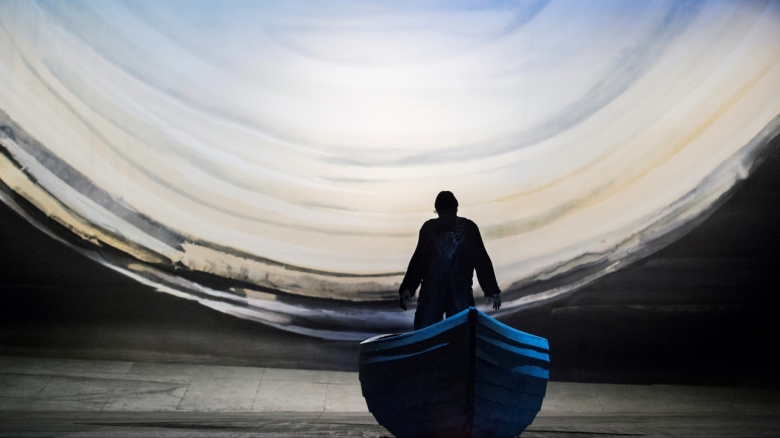 Sung in English with German & English surtitles
Introductory talks, in German, in the Holzfoyer half an hour before performances begin

»The Borough«, a fishing village on the east coast of England
Prologue Peter Grimes is questioned during an inquest into the death of his apprentice at sea. Despite being cleared of any wrong doing, rumours about his guilt continue to circulate among the villagers. Only the widowed teacher Ellen Orford dreams of a future with Grimes. Act 1 Fishermen and women describe their tough life on the coast, made less intolerable by quantities of gin. An approaching storm unsettles everybody. All shun Grimes, only Captain Balstrode and the quack Keene help him pull up his boat. Keene has procured another apprentice for Grimes from the workhouse. Ellen Orford offers to collect the boy. A storm tide is approaching. Balstrode advises Grimes to start a new life elsewhere. Grimes holds on tight to his dream of winning the village round, through hard work and wealth, and then marrying Ellen. Balstrode warns him not to let »the old tragedy« repeat itself with the new apprentice. Late evening, in the pub, Grimes broods over life in metaphorical imagery. Balstrode prevents an argument that threatens to breakout with the other customers. Soaked by their journey through the storm, Ellen Orford arrives with the child. Despite other people's misgivings, Grimes leaves with the boy. INTERVAL Act 2 On a Sunday morning, while the other inhabitants are at church, Ellen Orford finds a bruise on the child's neck. Grimes arrives to take the lad out fishing, on his day of rest. Ellen reproaches Grimes, who pushes her aside and leaves with the boy. The men gather to call the fisherman to account. Grimes hears the villagers approaching while preparing to go and catch a huge shoal he has seen. He tells the boy to climb down the cliff to the boat. The child slips, falling to his death. Grimes disappears. Act 3 A party is in full swing. Mrs. Sedley voices her suspicions that Peter Grimes, who has not been seen for days, has murdered his apprentice. Ellen, overheard by Mrs. Sedley, shows Balstrode the boy's jersey, which she found by the tide-mark. The inhabitants of the Borough decide to punish him. Grimes hears the mob searching for him. Ellen and Balstrode appear. Balstrode tells Grimes to take his boat out and scuttle it. Early next morning the coastguards report that a boat is sinking. Nobody takes much notice.

Peter Grimes is driven into a corner, rejected by a community that blames him for his young apprentice's fatal accident. The fisherman is faced with the small-mindedness of a bigotted middle class village. The director Keith Warner draws the typology of a place with vivid enjoyment by portraying strange people and focussing on their relationships. Increasingly isolated, Grimes has no other choice but to find death out at sea. This work by Benjamin Britten, performed for the first time just after the end of World War II, has long been regarded as Britain's national opera. The composer's aim, »to give expression to my knowledge about the never ending struggle of men and women who spend their lives trying to wring a living from the sea«, couldn't have been better realised. Vincent Wolfsteiner, who was cheered to the rafters for his portrayal of the lead role when the production first opened, is Peter Grimes again.