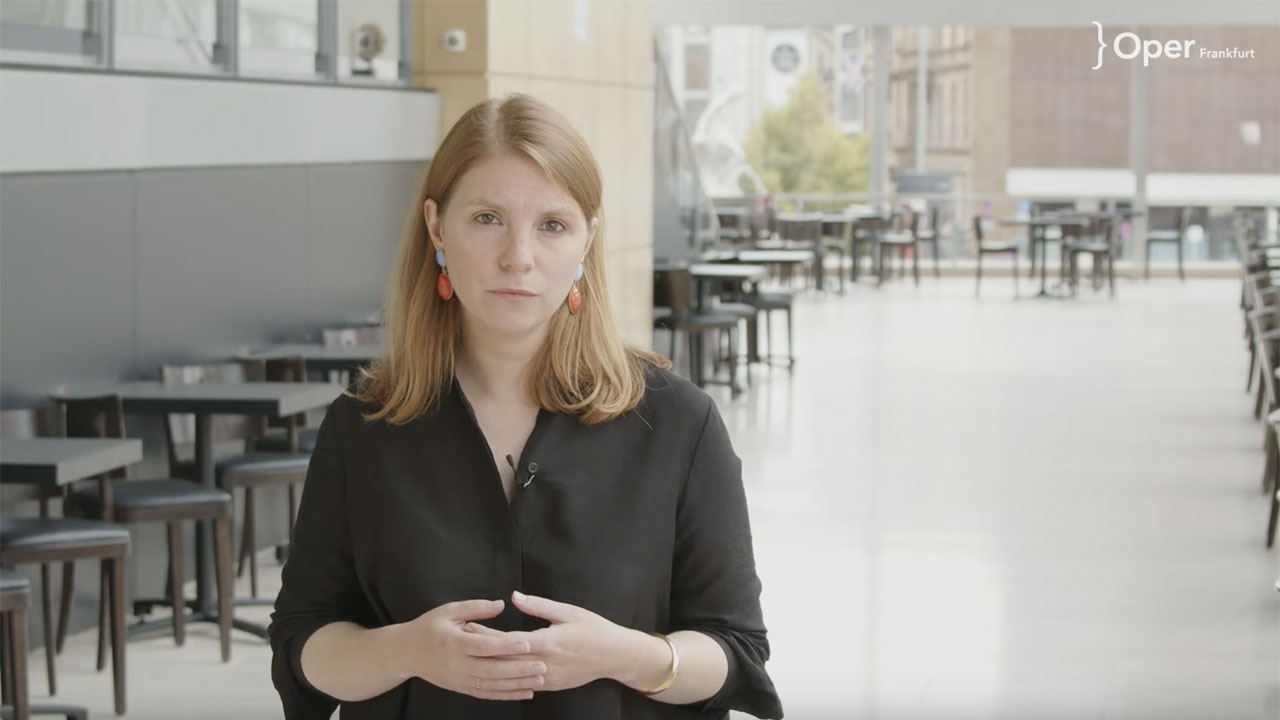 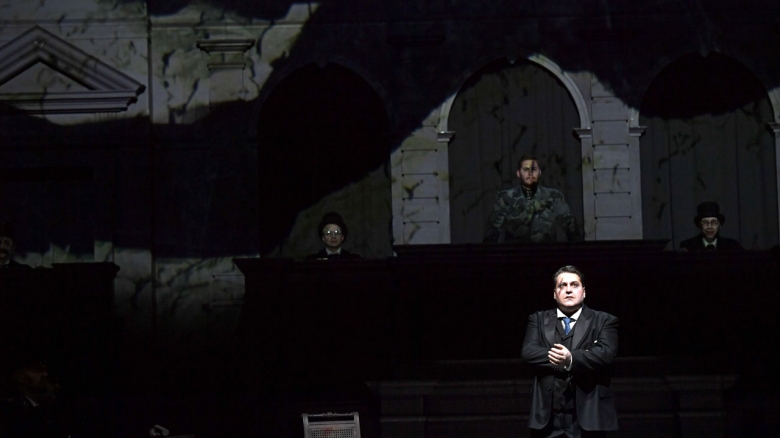 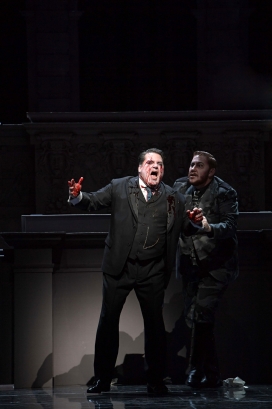 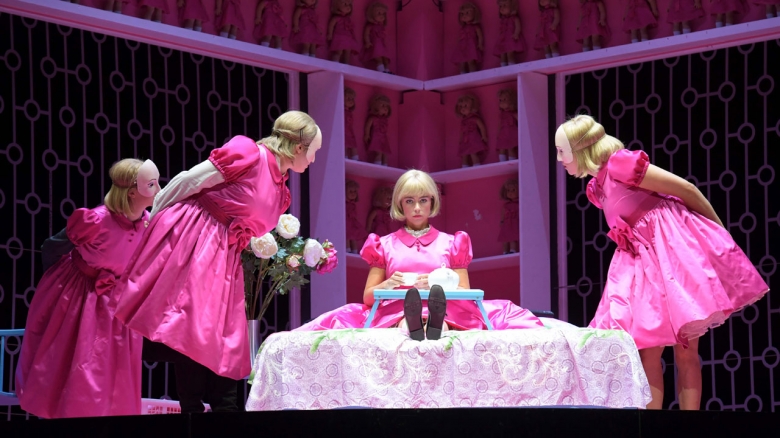 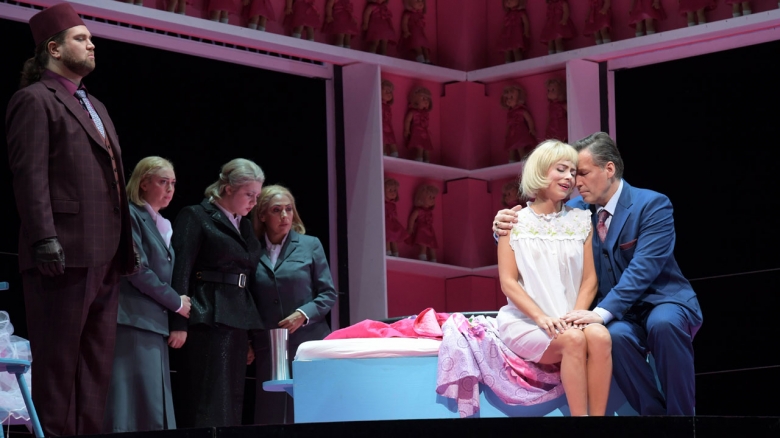 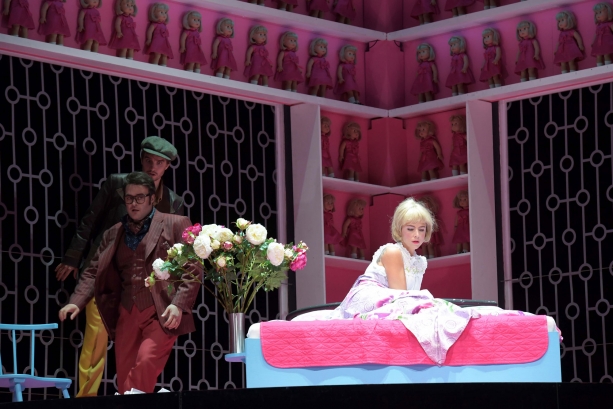 This double-bill first seen October 28 2018
Introduction (on video, in German) will appear here and on YouTube shortly before opening night

Oedipus was given the throne and the widowed Queen Jocasta in return for delivering Thebes from the Sphinx. The city is now afflicted by the plague. The people beg Oedipus to help. Jocasta's brother Creon, who Oedipus sent to Delphi to consult the oracle, returns and reports: King Laios' murderer is in Thebes; if he's found and thrown out, the plague will end. Oedipus turns to the blind seer Teresias, who says nothing, drawing suspicion upon himself. Then Teresias announces that the man they seek is a King. Oedipus now suspects that his brother-in-law, with the seer's help, wants to usurp the throne. Act 2 Jocasta's certain that all oracles lie. She says that Laios was killed on a crossroads … Oedipus feels sick, the terrible truth is dawning on him. He wants to question the only witnesses of Laios' murder. The messenger and shepherd, who then arrive, reveal the truth: Oedipus was found as a baby with pierced, bound feet, abandoned by his parents Laios and Jocasta, and given to King Polybos of Corinth, whose death has just been announced. Oedipus realises he has committed patricide and incest.

Blind Iolanta lives as her father King René wishes, cut off from the outside world. René forces his subordinates to maintain a framework that keeps his daughter in ignorance of her blindness and doesn't interfere with his obsessive paternal love. The nurse Martha and her daughters Brigitta and Laura care for Iolanta. To ensure the smooth running of this set up, René pretends to want the Arabian doctor Ibn-Hakia to treat Iolanta. When he claims that Iolanta really could be cured if she was made aware of her blindness and wanted to see, René forbids it. Robert, Duke of Burgundy, and his friend Vaudémont are lost. Robert, who was engaged to Iolanta when they were children, raves about the attractive Countess Mathilde, while Vaudémont dreams of true love. They both ignore a sign saying: »Entry forbidden upon penalty of death« and find themselves – in ignorance of who they find there – in Iolanta's room. Robert reacts with displeasure and disappears. Vaudémont and Iolanta fall in love. While he tells her about light and the beauty of the world, she gradually begins to realise that she lacks a fundamental sense of perception. René's beside himself with rage when he finds them together and hears that Vaudémont has told Iolanta about her blindness. Ibn-Hakia shall now treat Iolanta and Vaudémont, if the cure fails, as the King is sure it will, must die. Iolanta, prepared to do everything she can to save her beloved, places herself in the doctor's hands. Iolanta can now see and starts to try and make sense of the deceptive world she has lived in for so long …

Oedipus – a King in times of social turmoil, is forced to realise that he was blind to the truth for many years. He killed his father and married his mother. Iolanta – a blind King's daughter who, under strict orders from her father, knows nothing of her impairment, gains knowledge and sight through love. Facing up to the truth is inextricably linked to delving into secret fears and what is hidden in the depths of the soul for both protagonists, and can lead to disaster … Stravinsky and Jean Cocteau's opera-oratorio Oedipus Rex, written in the 1920s, is rather like a still life: an archaic story, in Latin, dealt with in a neo-classical way, monumental, without being programme music. Ominous, pulsating rhythms combine with harmonies, influences from the Middle Ages, Russian folk and orthodox church music, classic and jazz. Tchaikovsky's last opera Iolanta, tells a fairy tale, a process of realisation in a vivid musical language that shimmers with bright colours. This one-act work is actually a great romantic opera in disguise.