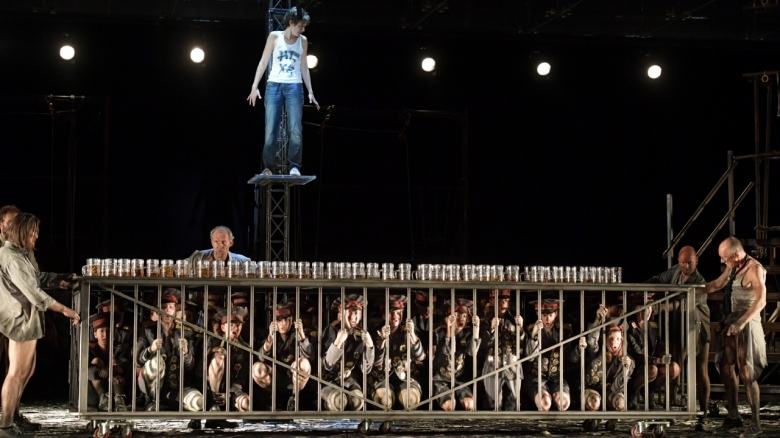 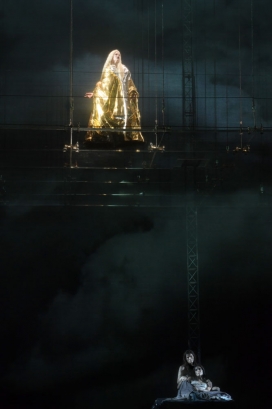 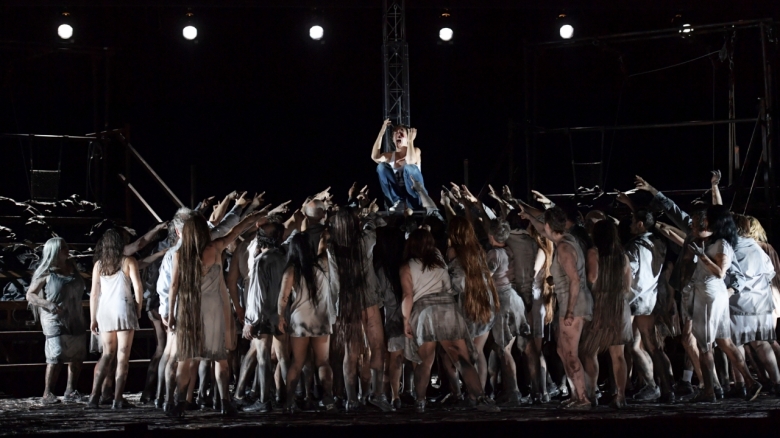 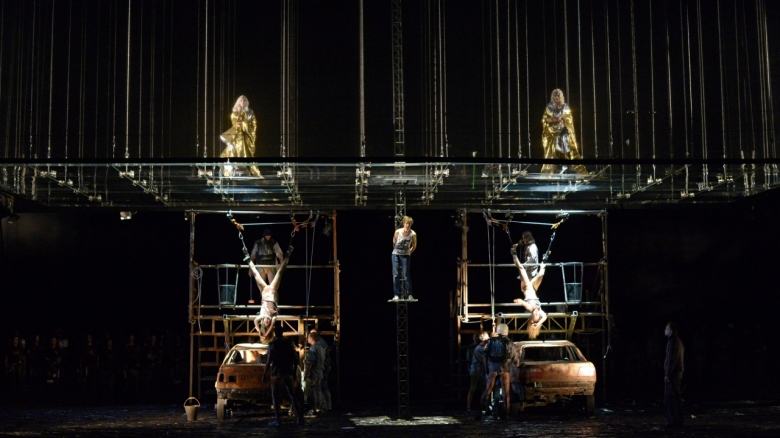 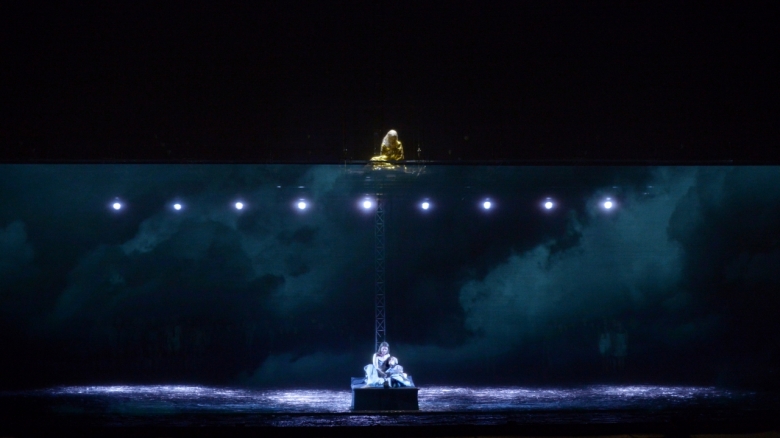 This production opened June 11 2017
Introductory talks, in German, in the Holzfoyer half an hour before performances begin

La Damoiselle élue – The Chosen One The chosen one, leaning out from the gold bar of Heaven, looks down upon her beloved on earth. Surrounded by lovers newly united, she longs for the moment when he can join her in Heaven. Then, with the Virgin Mary as her advocate, she will beg Jesus Christ to allow her to be united, as was granted them for only such a short time on earth, with her lover for eternity. Will it come to pass?
Jeanne d’Arc au bûcher – Joan of Arc at the Stake France during the Hundred Years' War: a fractured, desolate land, half occupied by English forces. Deliverance is brought by a young country girl from the village of Domrémy: Joan of Arc. We see her at the stake, after the Inquisition in Rouen found her guilty of heresy, in the moments before she is engulfed by flames. Brother Dominic has come down from Heaven with a book which tells her story, including the injustices perpertrated against her by his fellow Dominicans and religious scholars at the Sorbonne. Joan asks him to explain how things could have gone so far?Stations in her life flash before her eyes. She remembers the biting smoke and heat of the fire; the galvanized crowds calling out for her to be killed as a witch and heretic. She relives her trial; it was animals, not people, who tried her: Bishop Cauchon, the pig (Porcus), sits in judgement, the clerk of the court is a donkey, the assessors, sheep. They twist Joan's statements with their dog Latin, in order to condemn her. She remembers her arrest and being handed over to the English. Brother Dominic demonstrates the intrigues of political power and vices of rulers with an absurd card game, in which nobody loses, except Joan. Memories take her further back: to when, guided by her voices, she led the king through woods thick with snow to his coronation in Reims. Thanks to Joan the north of France, the granary (symbolised by the Wind Mill), and south, the vineyards (personified by Mother Wine Cask) are reunited. She remembers her childhood in the Lorraine, when she heard voices for the first time: St. Catherine and St. Margaret told her to go to war with standard and sword and liberate France. Now Brother Dominic asks Joan to explain everything, but she says that only little girls from the Lorraine, who sang the Trimazô song, would understand. The circle closes: the Virgin Mary gives Joan the strength to bear her martyrdom at the stake. Brother Dominic has vanished. When a priest promises her mercy if she recants, she refuses. So she becomes one of the candles offered to the Virgin Mary in the children's song Trimazô. Joan dies, accompanied by her saints, in the name of hope, happiness, love and an unwavering belief in God.

Are we back in the Middle Ages? The Catalan theatre makers La Fura dels Baus force the audience to not forget things that matter in their thrilling production. Honegger's dramatic oratorio acts as a floating prologue to Debussy's cantata. Carried on tender sounds, a young dead woman – the »chosen one« – looks down from heaven, wistfully, at her beloved on earth. Hoping for salvation, but terrified of death, St. Joan at the Stake goes straight up to heaven. In the moment of her death in the flames the librettist Paul Claudel allows us to join her reliving stations in her short life: the voices she heard, summoning her to her warlike mission; her leading the King to Reims for his coronation and beating the English in Orléans; and, finally, her trial in Rouen. She is confronted by a brutalised mob, who sometimes cheer her, sometimes hunt her as a witch. The tale of the mythical figure of light, and later national heroine of France, unfolds fascinatingly with force and power.