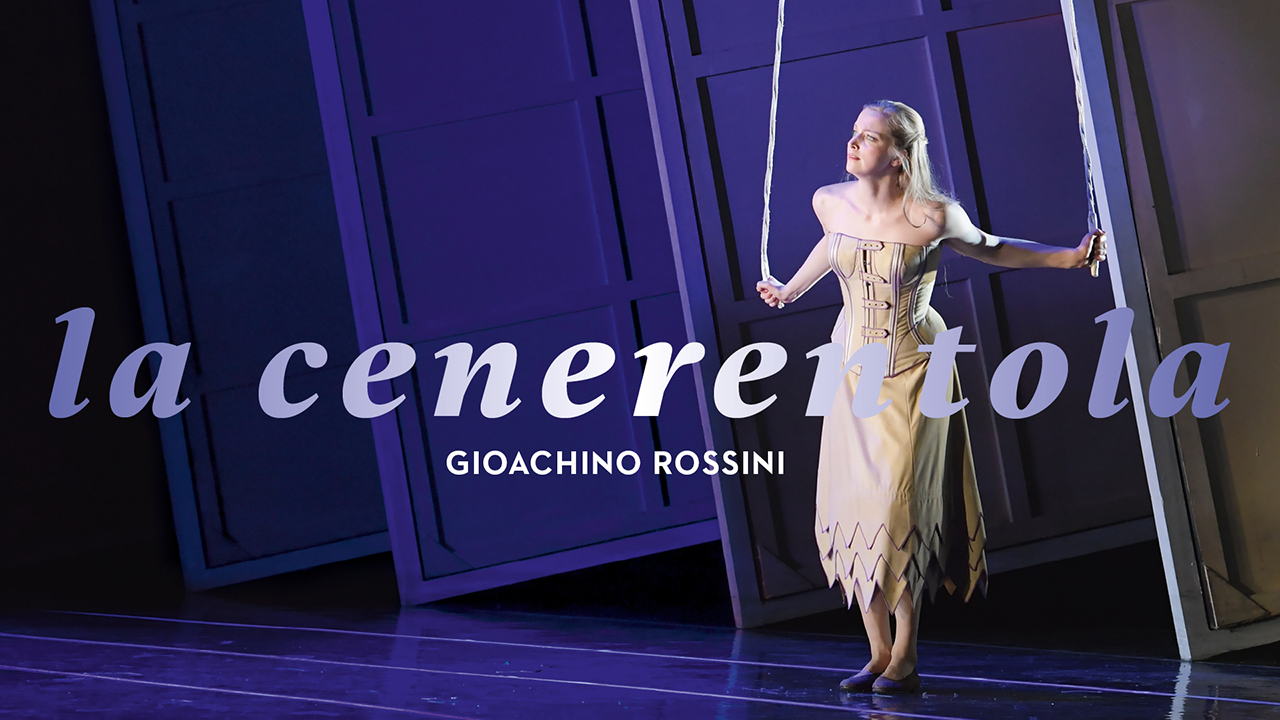 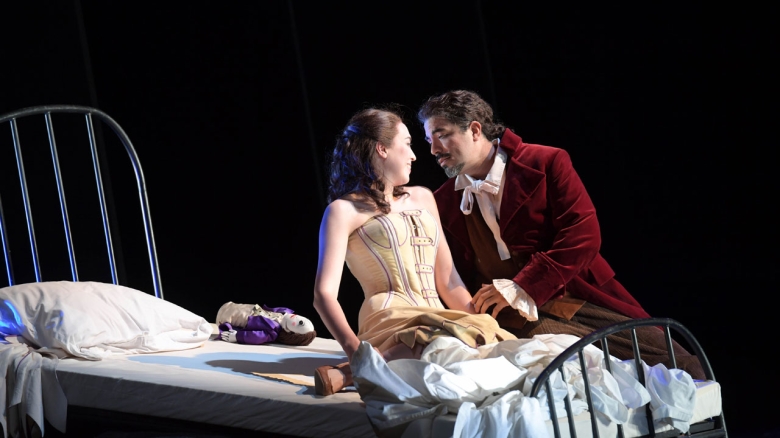 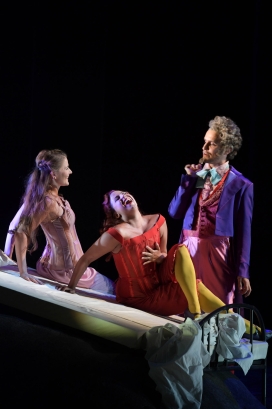 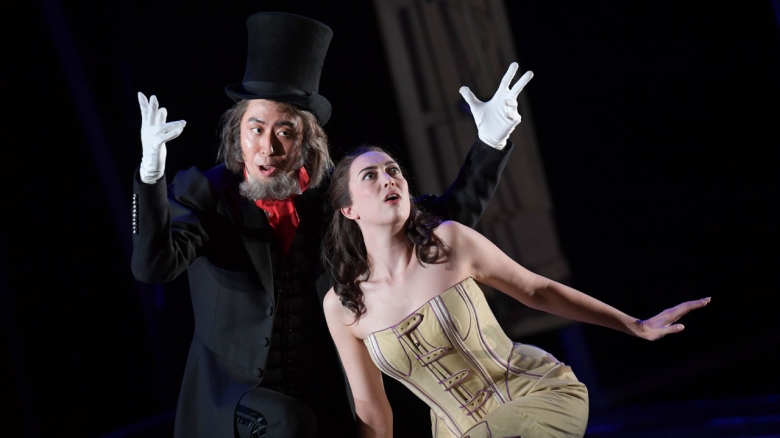 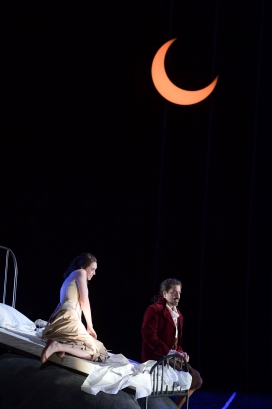 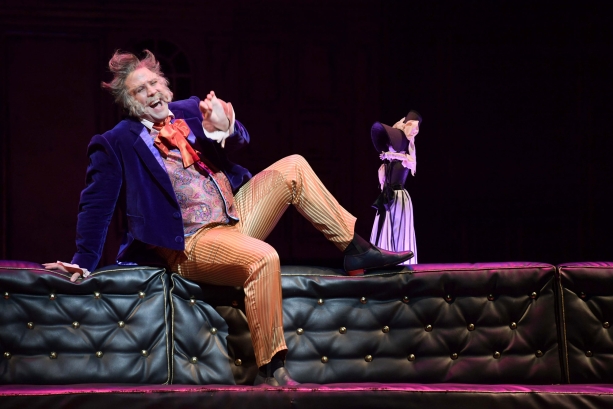 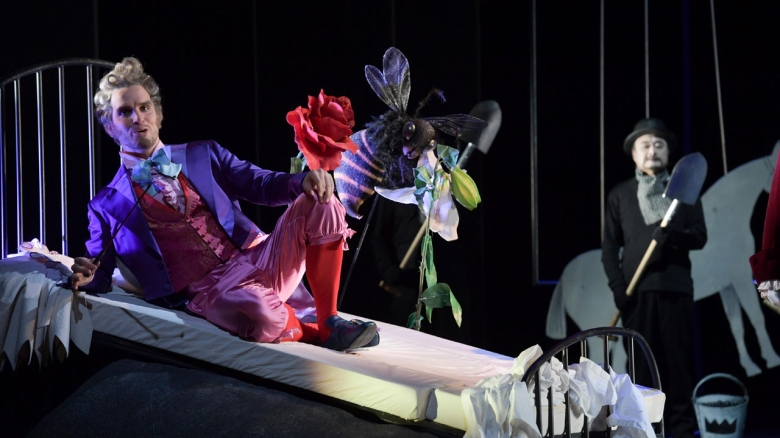 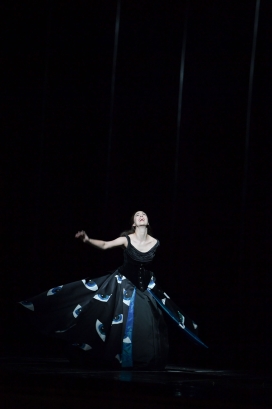 Don Magnifico, Baron of Montefiascone, has two vain, selfish daughters, Clorinda and Tisbe, who treat their step-sister, Angelina (La Cenerentola), like dirt. They expect Angelina to wait on them hand and foot. Don Ramiro, the young Prince of Salerno, is looking for a wife and his teacher, the magician Alidoro, wants to help him to find the right one. Alidoro, disguised as a beggar, calls at the Baron’s run-down home and is treated rudely by the horrid sisters who are disgusted by him. Kind Angelina, however, gives him a warm welcome. Courtiers arrive with an invitation to a ball for the Baron’s daughters. Clorinda and Tisbe are very excited and both feel sure they're bound to be chosen by Prince Ramiro. The Prince, disguised as his valet Dandini, arrives at the Baron’s house where he meets Angelina - they are immediately drawn to each other. Dandini now makes his entrance, disguised as the Prince, and Ramiro is very amused to see how the Baron and his shallow daughters grovel before him. Angelina begs her father to let her to go to the ball, even if only to watch, but he refuses outright. Alidoro, who now reveals himself to be a confidant of the Prince, sees from his register that the Baron has three daughters and asks where the third one is. Magnifico says she's dead. When the others have left to go to the castle Angelina is comforted by Alidoro, who gives her two matching bracelets and a gown - she shall go the ball after all. At the castle the courtiers make fun of Don Magnifico, who's had a lot to drink. Clorinda and Tisbe try very hard to attract the Prince’s attention. The arrival of a stranger is announced and Angelina enters the ball - a veiled, radiant, mysterious beauty. Her family are astonished by her resemblance to Angelina. Act 2 Don Magnifico is very in debt so desperately hopes one of this daughters will marry a wealthy man. The supposed Prince tries to woo the unknown beauty but she tells him she cannot return his affections as she's in love with his valet. Ramiro, who overheard their conversation, immediately offers her his hand in marriage. Wise Alidoro intervenes: Ramiro should see Angelina and learn to love her in her true guise first. Angelina gives Ramiro one of her bracelets, so they might know each other again, and leaves. Ramiro must now try and find her. Clorinda and Tisbe try their luck again with the Prince who says he can't marry both of them but that the other sister could marry his valet - they're both horrified by the idea. Now it's time for the Prince and his valet to reassume their own identities: Magnifico and his daughters are furious at having been taken in by this deception and leave. Ramiro wants to set off immediately to try and find his love. Alidoro intervenes again by conjuring up a thunderstorm which forces the Prince and his party to seek refuge in the Baron’s house. Ramiro recognizes the bracelet on Angelina’s wrist and asks her to marry him. Angelina forgives her father and step-sisters. The wedding is celebrated at the castle.

Probably the best known setting to music of Cinderella, it touches on many different versions of the fairy tale: the subtitle in the libretto – The Triumph of Virtue - harks back to tradition, telling the story of Angelina (Cenerentola), Don Magnifico’s step-daughter, treated like a slave by her step-sisters Clorinda and Tisbe before Prince Don Ramiro finally rescues her from her horrible family and makes her his princess. La Cenerentola occupies a special place in Rossini’s creative legacy: it combines musical fireworks with detailed close-ups of the central figures, lending the fairy story amusing, contemplative and poetic accents. We get to know these familiar characters, their desires and longings from a different angle, in this warm-hearted, human and very funny production.

Directed by Keith Warner, it opened in 2004 and was enthusiastically received. It brings across Rossini‘s humour and musical depths at the highest level: a dream on silken threads.