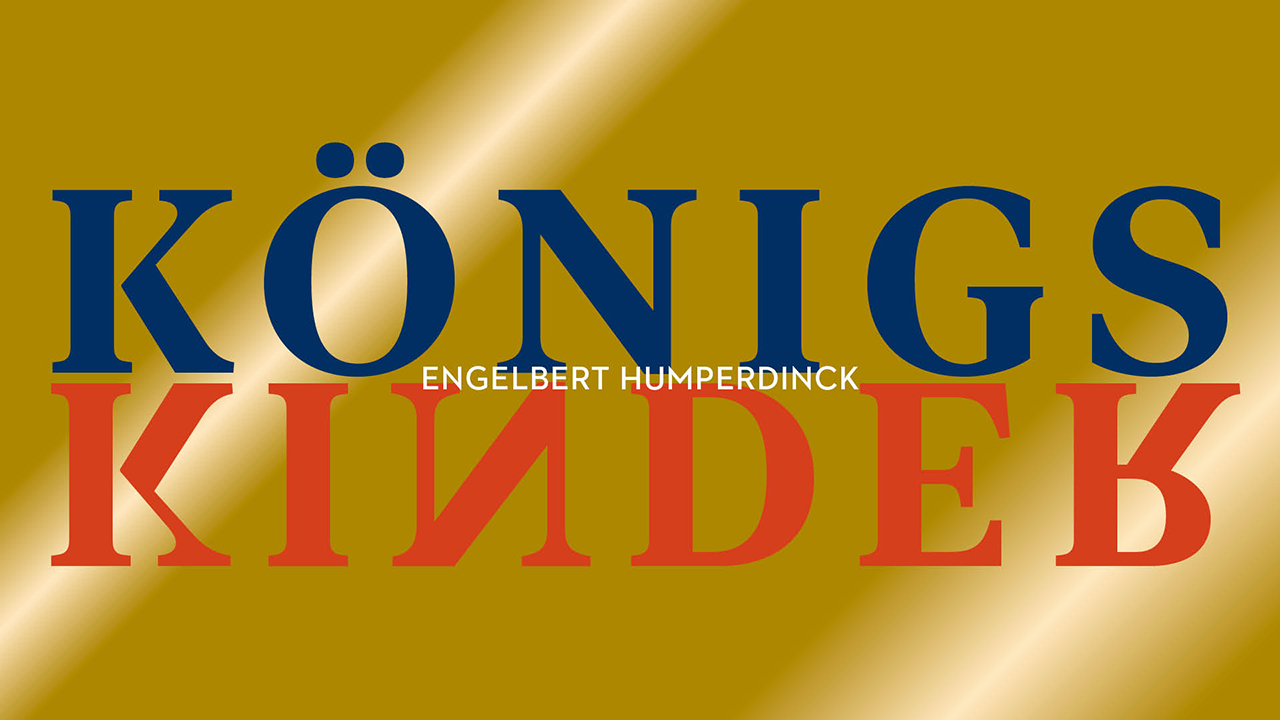 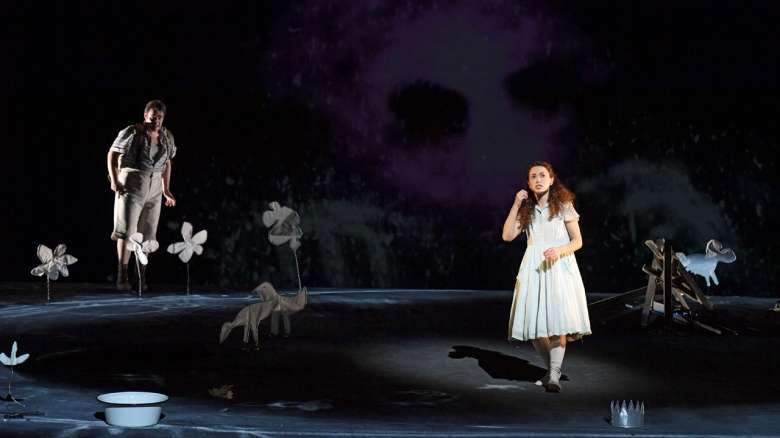 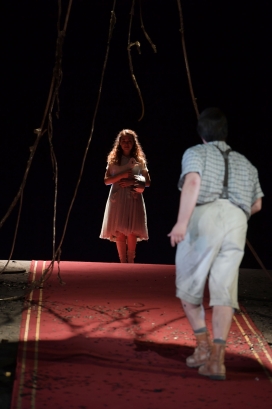 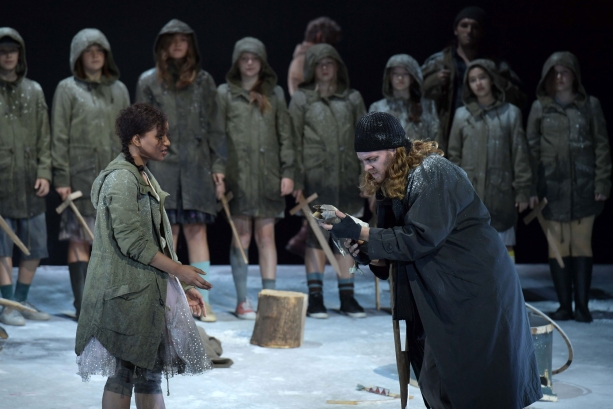 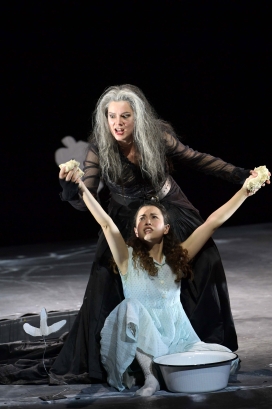 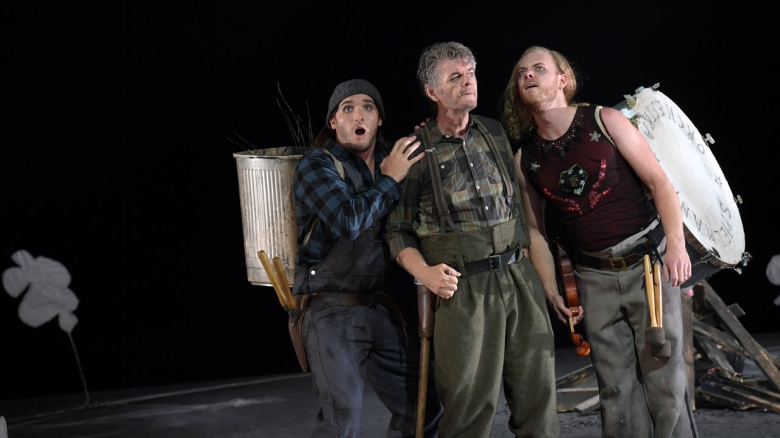 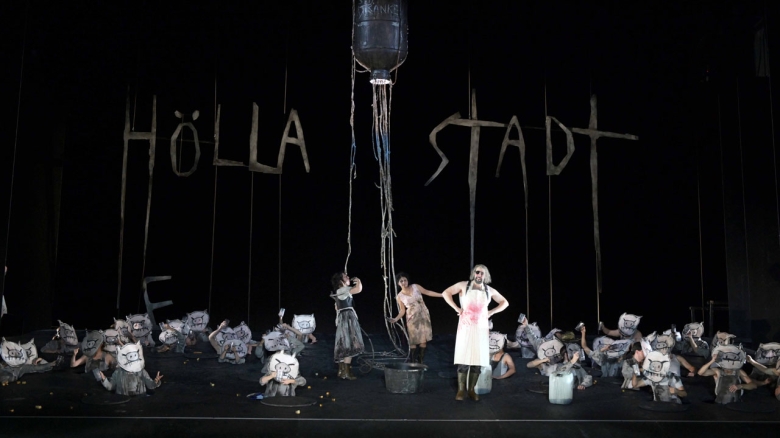 ACT I A young girl lives in Hellawald with her supposed grandmother, a witch, tending her geese. She longs for human company but the witch has cast a spell on her. The witch introduces her to magic by teaching her to bake cursed, deadly bread. The girl counters the curse with a blessing: whoever eats of it will see beautiful visions of what their heart most desires. A king’s son appears after the witch has gone off into the woods. He has left his father’s castle to learn about people and the world. He falls in love with the girl, and she with him. When she refuses his golden crown he throws it away and asks her to follow him, but spells makes this impossible. Disappointed, he calls her a coward and storms off. The witch comes home. When she finds out that a man has been there she flies into a rage, locks the girl up and re-enforces the strength of her spell – the woods, the roots of every tree will never allow the girl to leave. A minstrel, woodcutter and broom-maker have been sent by the people of Hellastadt to find the witch and ask for her help in finding a king. She tells them that the first person to enter the town’s gates at the stroke of twelve the next day will be their new ruler. The minstrel finds the eavesdropping goose girl. When he hears that she has met and fallen in love with a king’s son he says that she must help him look for him. The witch laughs at the prospect of the child of a murderer and hangman’s daughter marrying a prince, but the minstrel says that the girl’s parents’ love for one another and sufferings bestowed royal status upon them, making the goose girl a king’s daughter. She prays to her parents to send a sign that she will see the king’s son again. The spells are broken. She's free to follow the minstrel. ACT II The king’s son arrives in Hellastadt, where he has trouble fending off the innkeeper’s pushy daughter. He hates the place but, dreaming of the girl he met in the woods, realises that if he wants to be a king then he must work for it, and serve, in some way, for a year. The innkeeper has nothing better to offer than a job looking after his pigs. The woodcutter and broom-maker arrive, announcing the king’s arrival. The people prepare to welcome their king. When the prince hears this he tries to explain what it takes to be a good king. He's ridiculed and accused of being a conman. The gates are opened at twelve o’clock: the goose girl enters, the crown on her head, with the minstrel. When the king’s son welcomes her as his queen the people feel they've been made fools of and deceived. In fury they drive them both out of town. A child realises they have just chased away their king and his wife. ACT III Winter: the minstrel, whose leg was badly injured by the furious townspeople, lives in the hut that used to belong to the witch, who was burned at the stake. The woodcutter, broom-maker and children of Hellastadt try in vain to bring him back to town. The children want the minstrel to help them look for their lost king and his wife but he says they'll have to wait until spring because the snow will have obliterated any tracks there might be. He eventually gives in, and they set off into the woods. The royal children, freezing cold, starving and close to death, find their way to the hut. The prince asks for shelter and something to eat, but is turned away. He's desperate that he can't help his beloved or find his way back to his castle. He suddenly remembers his crown, which he gives to the woodcutter in return for some old bread found in the hut. They have no idea that it's the magic bread and eat it. Both curse and blessing are fulfilled, before they die they see visions of great happiness. Death cannot come, I love you, sings the goose girl. The minstrel, returning with the children, finds their bodies in the snow and vows to give them a royal burial.

Humperdinck's opera tells the gloomy tale of a goose girl and a prince in a partly symbolic, partly naive artificial language. His score, one of the most beautiful from the turn of the century, is one of his fourteen works for the stage, of which only his first, Hänsel und Gretel, established a firm footing in the repertoire. Its structure is influenced by Wagner's operas, echoes of whose music can also be heard. But Humperdinck  used "memory motifs" and reminiscent atmospheric sounds instead of Wagner's leitmotif technique to characterise people, relationships and actions. Königkinder, the saddest fairy tale opera ever, mirrors a heartless society incapable of tolerating anything unknown: the love between a king's son and a goose girl is not meant to be. Only a ridiculed minstrel, a man with a pure heart, recognises their noble love, their true worth.