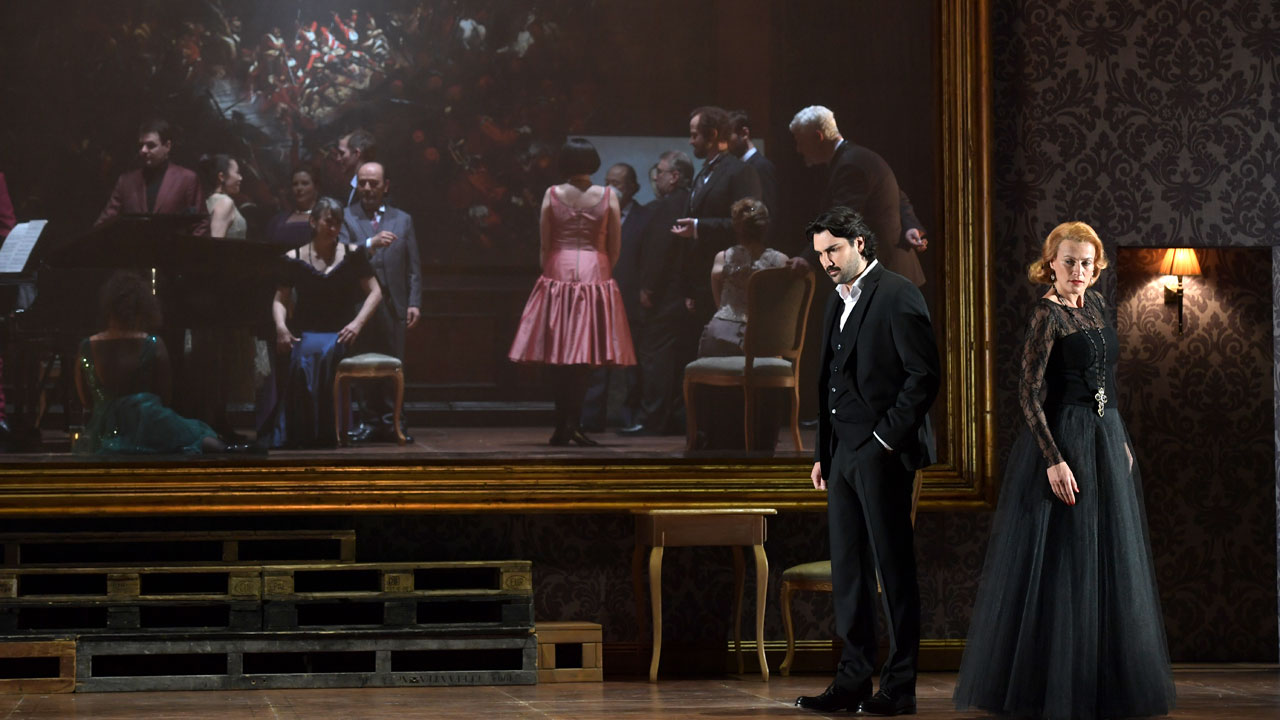 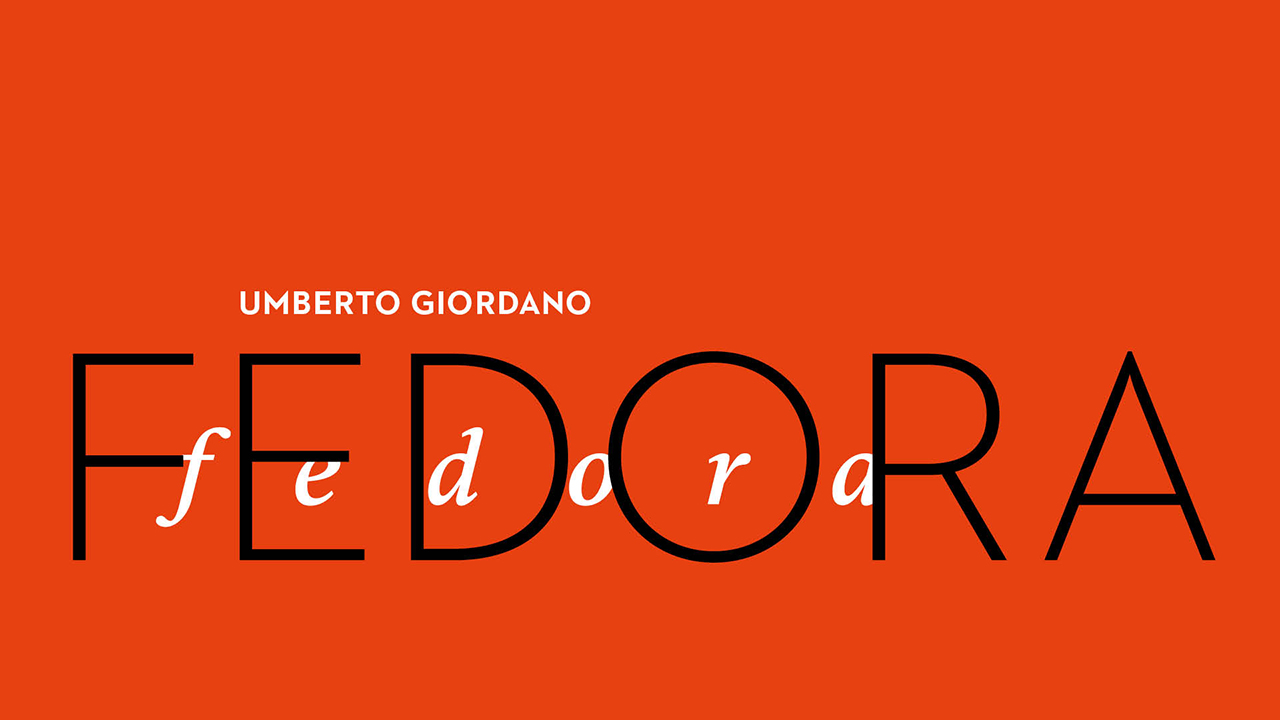 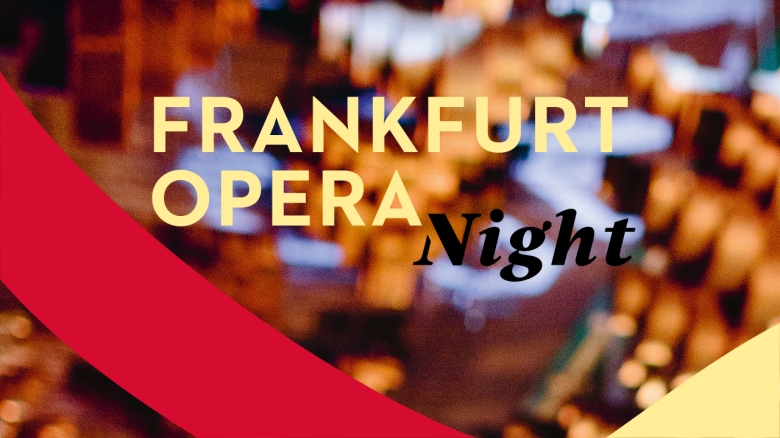 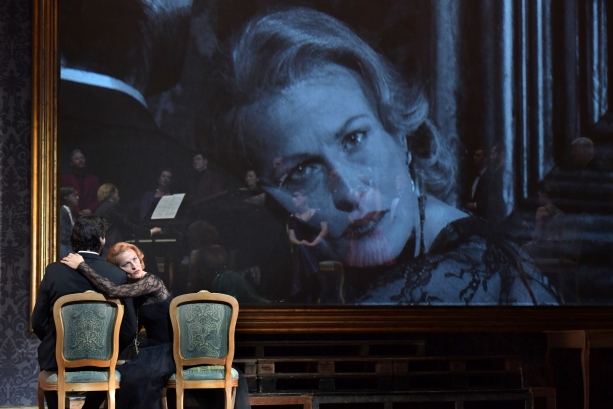 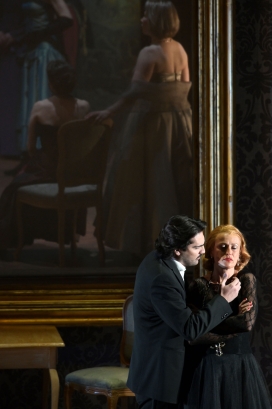 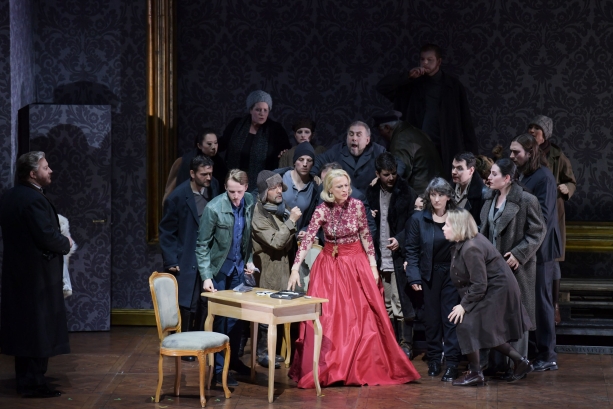 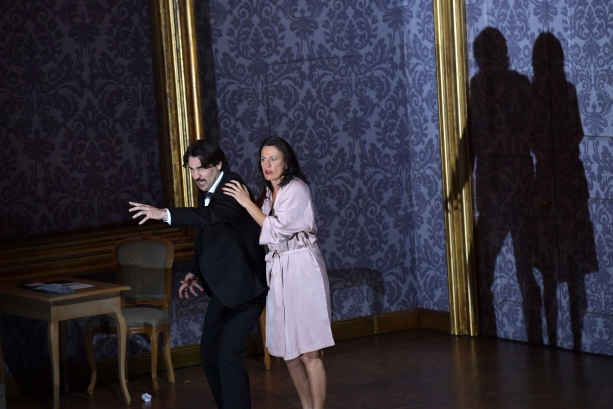 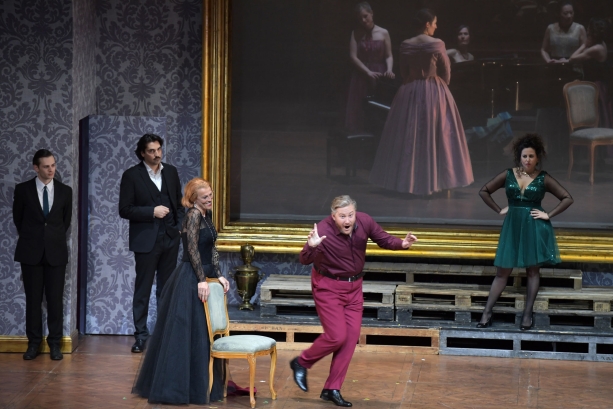 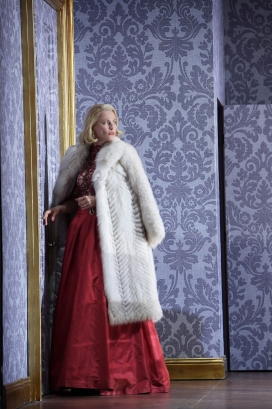 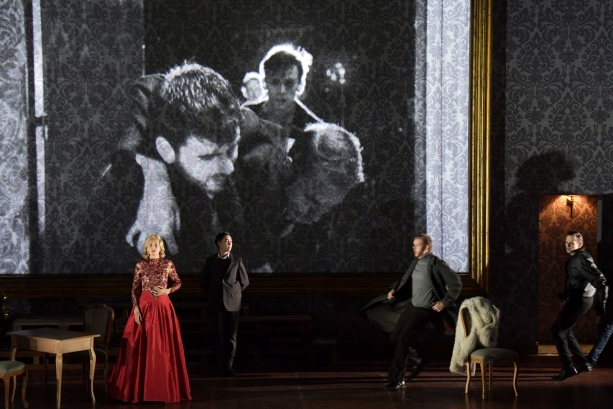 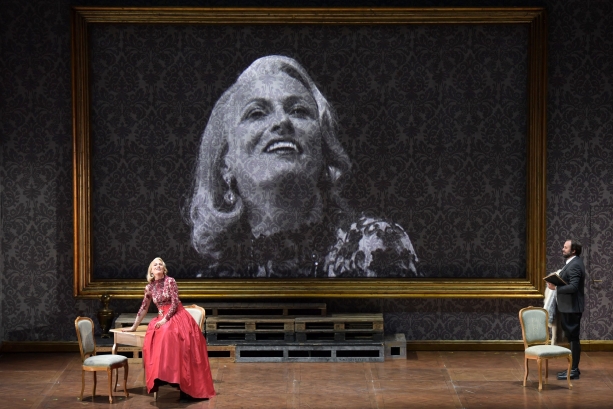 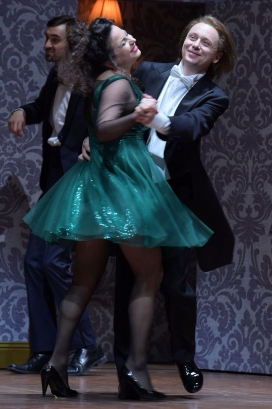 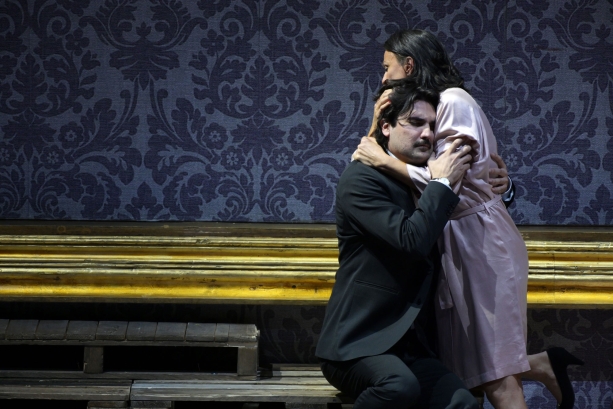 Production purchased from the Royal Opera in Stockholm, where it opened December 10 2016
The work has never been performed in Frankfurt before

St. Petersburg, winter Princess Fedora Romazov, a young widow, is engaged to Vladimiro, son of the Russian chief of police. They keep their relationship secret and out of the public eye. Fedora has no idea she’s got involved with a gambler, drinker and womanizer who’s almost bankrupt. Vladimir has cleverly concealed his true character from her. When Vladimiro doesn’t arrive to go the theatre Fedora goes to his house. It’s the first time she’s been in the home of the man she loves, but doesn’t know. She’s dreaming of their new life together, which begins next day, when Vladimiro’s carried in, shot and badly wounded. Doctors operate on him immediately. Fedora’s not allowed to be with him while he’s being treated, but is shown into a room where investigations have begun. All Vladimiro’s driver knows is that an unknown man was seen running from the scene. It is assumed the motive was political. Fedora follows procedures impatiently. She vows, in front of everyone, to ensure that the perpetrator is captured and punished. The servants think a neighbour, Count Loris Ipanov, could be the man they’re looking for. Fedora has the building searched immediately. The doctors can’t save his life. While sitting next to the dying man, Fedora overhears the inspector saying that they failed to arrest Loris, the chief suspect, as he has fled. ACT 2 . Paris, spring: Fedora has tracked Loris down in Paris and, with Inspector Gretch’s help, made sure he’s being tailed. She approaches him without revealing that she was Vladimiro’s fiancée. She’s playing the role of a vivacious, Russian aristocrat who frequents the salons with her cousin, Countess Olga. Although they’ve only met a few times, Fedora knows that Loris is attracted to her. She invites him to a reception where another guest is an eye witness to the events in St. Petersburg, a diplomat called Giovanni de Siriex. Only de Siriex knows Fedora’s plan: to make Lo¬ris fall in love with her and gain his con¬fidence so that he confesses. Then she’ll have him shot or deported by the Russian secret police. While Countess Olga introduces her new boyfriend, the Polish pianist Boleslao Lazinski, Fedora finds an opportunity to ask Loris why he’s living in exile in Paris. He tells her he’s wanted for murder and confesses to having shot Vladimiro. He says he’ll tell her more later. Fedora makes him promise to come back after the party. She appears to be grateful and declares her love for him. The party comes to a sudden halt when they hear that an assassination attempt has been made on the Tsar in Moscow. The diplomat asks Fedora to send her guests away. This also enables her to put her plan into action. The inspector from St. Petersburg - now a double agent working for Fedora - tells her about Loris’ contact with his brother Valeriano, who’s still in Russia. Fedora decides to send a letter to the Russian police about Loris’ confession and that his brother Valeriano may be an accomplice. She tells the inspector that Loris is coming back later, so they should be ready to arrest him at a given signal. Loris arrives and tells Fedora the real reason for his crime. He’s no anarchist; his motive was personal. He shows her letters proving that Vladimiro was in a relationship with his wife, Wanda. On the night in question he surprised them both during a tryst, and committed a crime of passion. Fedora is forced to realise that she was shamelessly used by Vladimiro, but continues to conceal her true identity. Her sorrow and Loris’ grief over his own wasted life bring them closer together. When Fedora hears the signal that means it’s time to hand him over, she begs Loris to stay till morning. ACT 3 Switzerland, summer. Fedora and Loris spend a few happy weeks together in a Swiss village. Olga has fled there too, after Boleslao suddenly ended their affair. De Siriex arrives unexpectedly. He shows an obvious interest in Olga and tells her that the Polish pianist was in fact a spy who was trying to glean information from the talkative countess. De Siriex brings news for Fedora too. The Russian police made a series of ruthless crackdowns after receiving Fedora’s letter. They arrested Loris’ brother and put him in a cell that was regularly flooded by the river Neva. He drowned. When Valeriano’s mother heard of his death, she died of a stroke. De Siriex warns Fedora that Loris will soon know everything. Fedora realises their Swiss idyll is ending. Loris returns from the village. A letter from a friend tells him that his brother and mother are dead, blaming a Russian female spy who allegedly accused him and his brother of being assassins and anarchists. When Fedora defends the woman, Loris realises who she really is. He accuses her of using deceit to win his love and trap him. Fedora realises she no longer has any reason to live and swallows poison in front of Loris. Christof Loy

The title figure in Umberto Giordano's verismo thriller moves between extremes at breathtaking speed: this Russian princess is a spy, avenger, lover, martyr and betrayed woman all in one ...

Special performance with a star cast and a chance to meet the artists in the main foyer upstairs afterwards (only with a special ticket, and capacity is limited). Money raised by this event to go towards the artistic work at Oper Frankfurt.

With Asmik Grigorian, Giorgio Berrugi, Nicholas Brownlee and others!