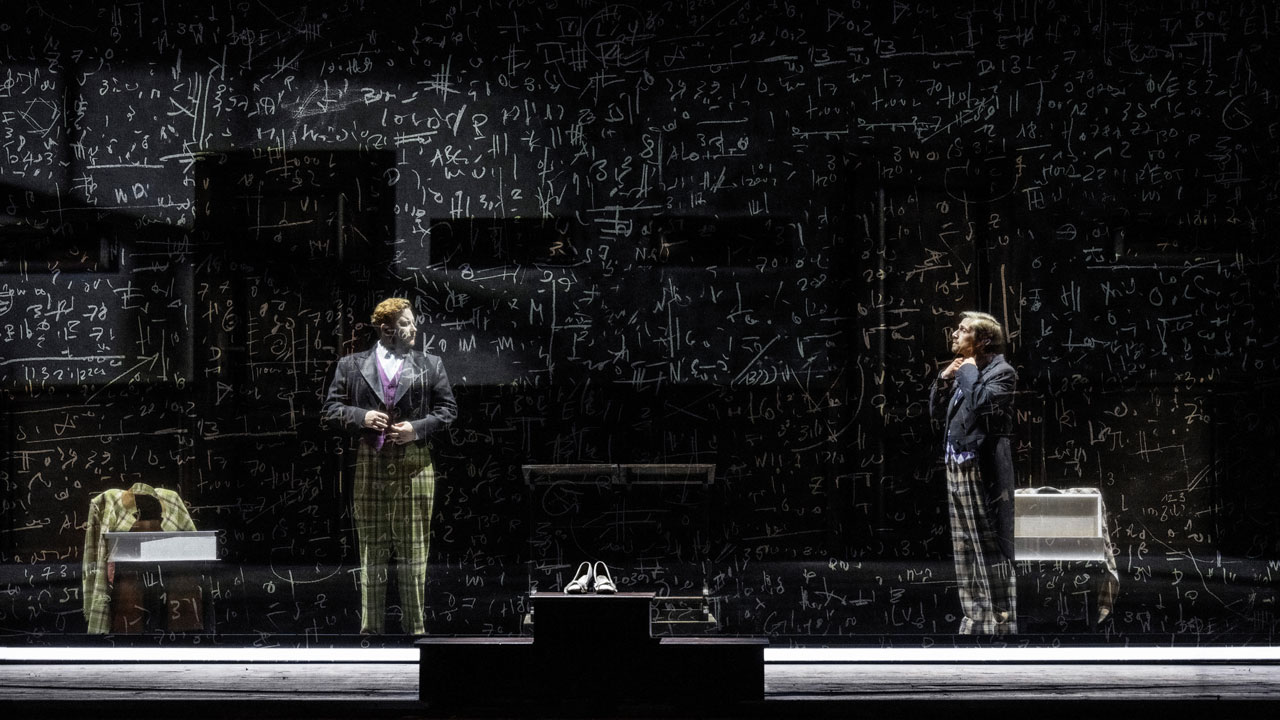 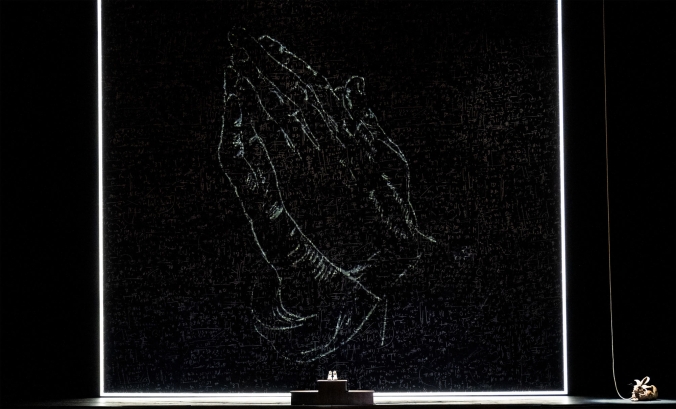 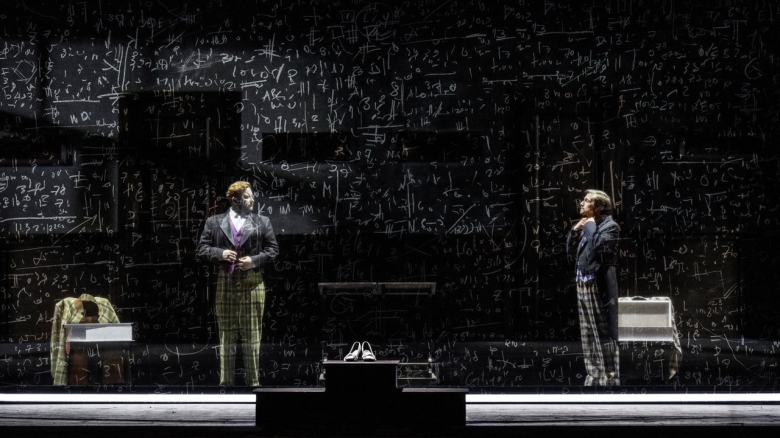 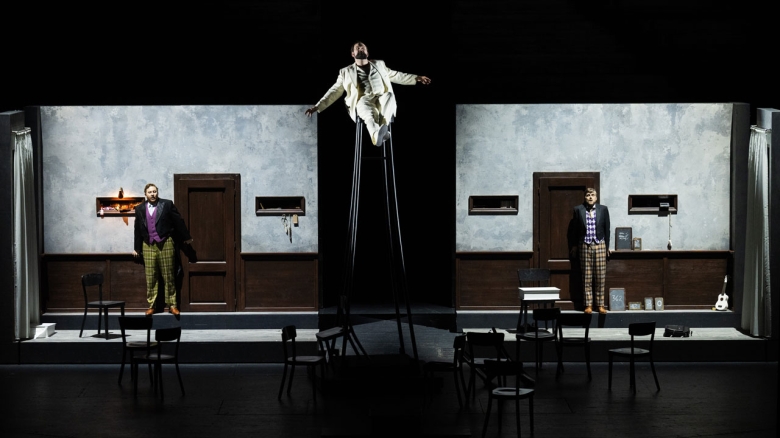 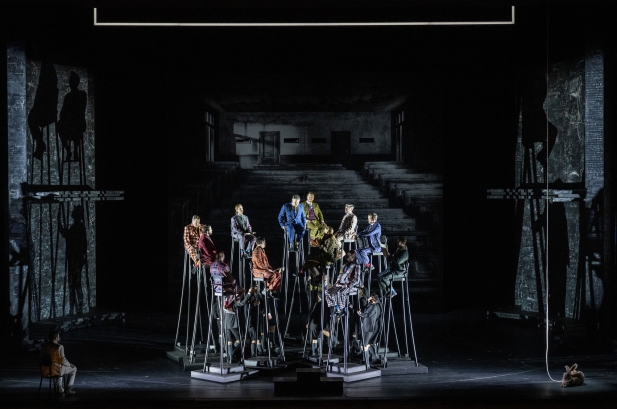 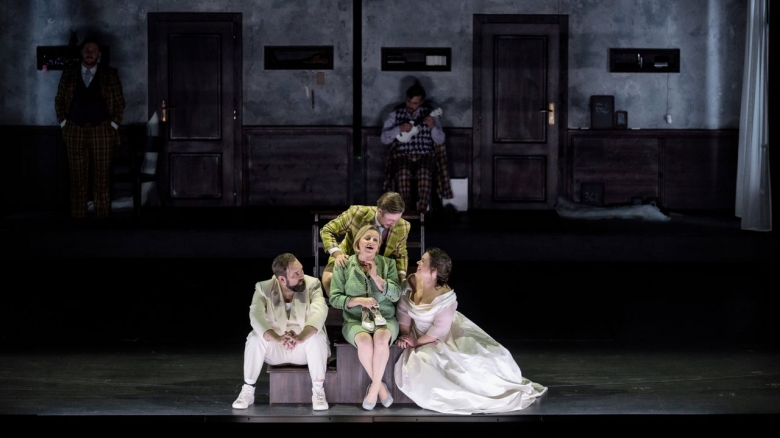 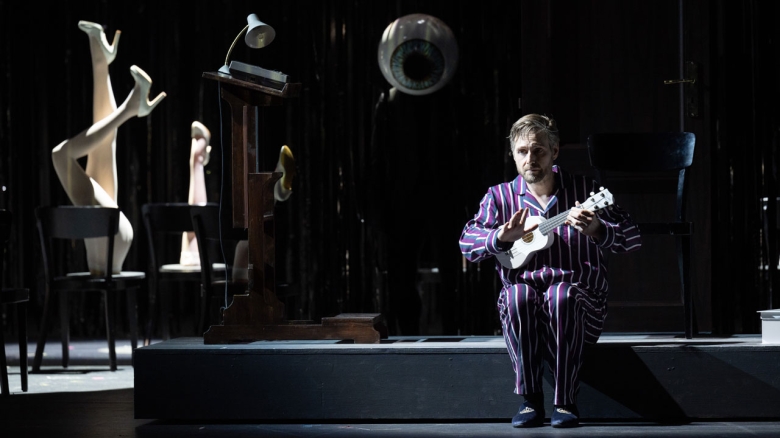 Day before St. John’s Day Walther, a Franconian Squire, sold his estate with the Goldsmith Veit Pogner’s help and has come to Nürnberg. Pogner’s daugher Eva and Walther have fallen head over heels in love. After Sunday mass he tries to find out if she’s already spoken for. Magdalene, her minder expains: Pogner’s giving his daughter away as the prize at the St. John’s Day singing competition. She can turn the winner down, but not marry anyone else. Walther realises he must become a Meistersinger to take part in the competition, although he knows none of the strict rules in the art of singing. David, shoemaker Hans Sachs’ apprentice, is in love with Magdalene, so can’t refuse when she asks him to teach Walther the complicated rules. The Meistersingers assemble and praise Pogner’s plan, but turn down Sachs’ suggestion that the public have a say in deciding the winner. Town clerk Sixtus Beckmesser, a suitor for Eva’s hand, sees an unexpected rival in Walther and tries to stop him taking part in the competition. Without success. Walther’s allowed to audition. Beckmesser, in his capacity as Marker, chalks up lots of mistakes. Sachs, who liked his song, can’t alter the Masters’ devastating verdict: Walther has „sung his chance away“. Act 2 St. John’s Eve Magdalene hears from David that Walther has failed. She tells Eva. Sachs can’t get on with his work: he can’t stop thinking about Walther’s song. Eva visits him, to seek advice from her fatherly friend. She even hints that she’d rather marry the widowed cobbler instead of Beckmesser, but it’s clear to Sachs, that Eva loves Walther. Beckmesser intends to serenade Eva, to consolidate his courtship. Magdalene and Eva swap clothes to avoid the town clerk. Eva (in Magdalene’s dress) and Walther plan their escape, but Sachs, who’s overheard everything, decides to prevent the bride being „abducted“. He prevents Beckmesser from getting a word of his serenade in edgeways by singing a song to help his work on Beckmesser’s new shoes. The town clerk ends up having to agree that Sachs mark up his mistakes with his hammer. Beckmesser sings louder and louder to drown out the hammering, waking the entire neighbourhood. David, thinking Beckmesser a rival, attacks the town clerk. A mass brawl ensues. Eva and Walther try to flee in the hurly-burly, but are stopped and separated by Sachs. After the mayhem the peace of St. John’s night reigns again. Act 3 St. John’s Day Morning David congratulates Sachs on his name day. Sachs mulls over last night’s chaos, violence and madness and decides to help the lovers Eva and Walther. The Squire spent the night in Sachs’ house. Sachs helps him turn his morning dream into a love song, with which to woo Eva on the festival meadow, and writes the first verses down. Beckmesser calls on Sachs to complain about the events of the previous evening. He finds Walther’s poem, thinking it must be by Sachs. The cobbler surprises him by giving it to him. Eva comes to thank Sachs for his help. The cobbler waits until Walther, Magdalene and David arrive, promotes his apprentice to a Journeyman and „christens“ Walther’s Prize Song „The Blessed Morning Dream Song“ St. John’s Day Festivities Everyone’s gone to the festival meadow. Beckmesser sings Walther’s words to music of his own. He’s ridiculed mercilessly. In his desperation he reveals that Sachs wrote the poem, who denies it and manages to ensure that Walther’s allowed to sing his song „properly“. He’s hailed as the winner. But when Pogner attempts to award him the title of Master, Walther turns it down. Sachs makes a speech to try and change his mind. The festivities draw to a close.

Die Meistersinger started off as a Satyr play (a parody of tragedy combined with comedy), but this »light-hearted« comedy turned into one of the longest and most complex scores in operatic history and still gives rise to heated debate. Unlike the book which inspired him, which viewed the world from an aristocratic point of view, Wagner composed a middle-class opera parodying medieval minstrels.

On midsummer’s eve, the day before the competition, the goldsmith Veit Pogner offers his daughter Eva’s hand in marriage as the prize. ...

The coming into being of Meistersinger took two decades, right across Europe. Wagner made his first drafts in Bohemia, started on the text in Vienna and continued shaping his characters in a hotel room in Paris. So Wagner‘s German masters were – or at least some of them – born abroad. A dreamy summer night is suddenly hijacked by madness which ends in a senseless mass brawl. A "curious" St. John's Day.