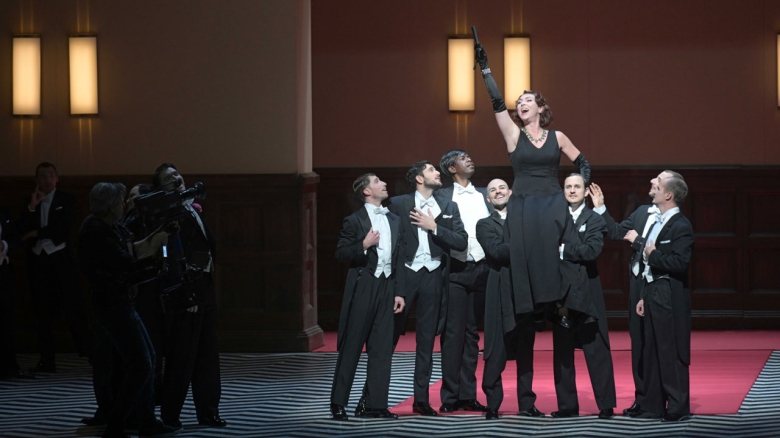 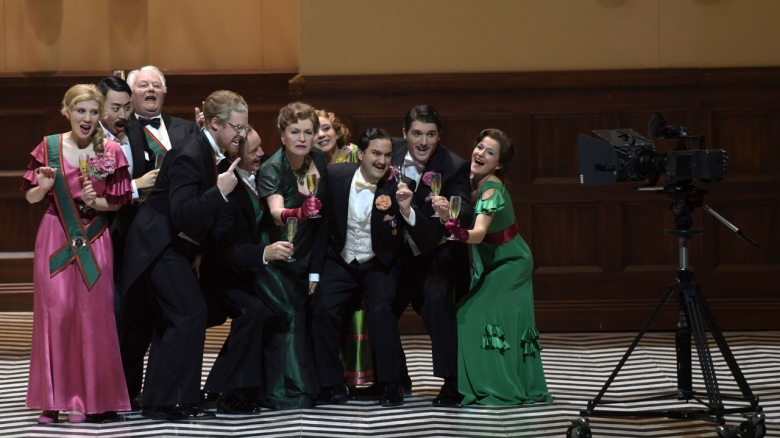 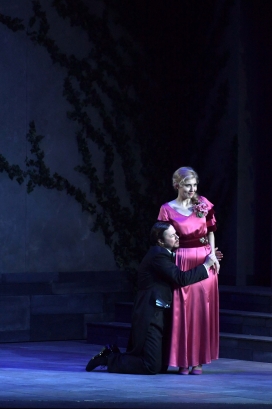 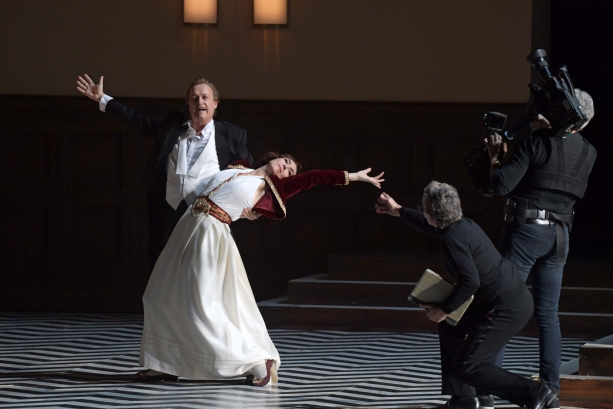 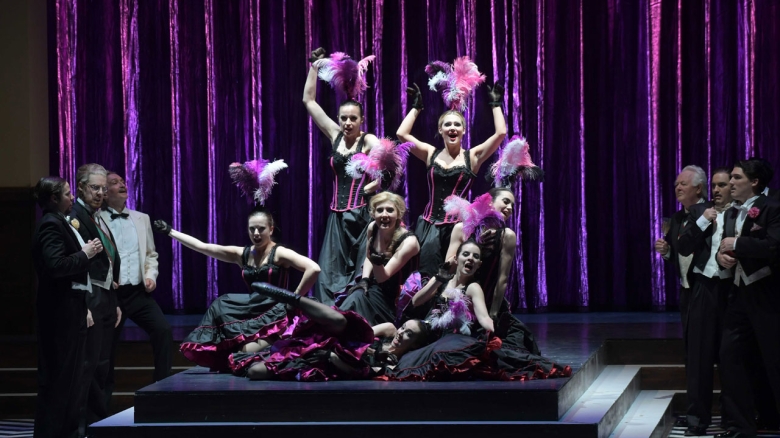 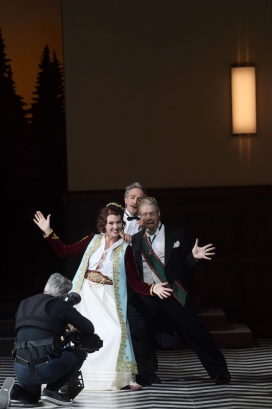 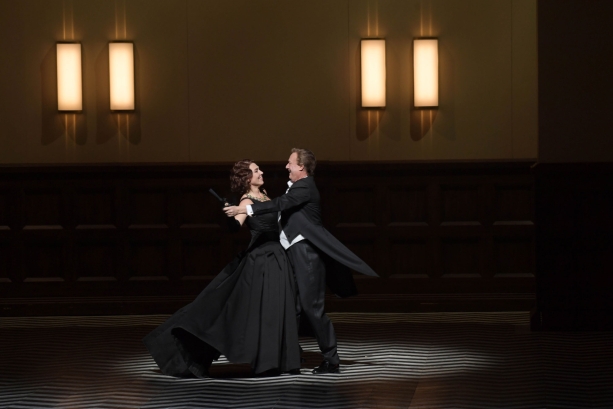 Introduction (in video, in German) will appear here and on YouTube shortly before opening night
Audio-Einführung

Act 1 Graf Danilo Danilowitsch and a tenant farmer's daughter Hanna used to be a couple in their homeland in the Balkans. The differences in their social standing caused problems – a rich uncle threatened him with disinheritance – and Danilo walked out on Hanna. They meet again: at a ball in the Pontevedrinian Embassy in Paris. Danilo now works as an attaché there and has found a home from home in Maxim's, a bar where the Grisettes dance. Hanna married the court banker Glawari, who died shortly afterwards, making her a very wealthy widow. The Ambassador, Mirko Zeta, is desperate to ensure that Hanna's fortune stays in his country, and prevent Pontevedro from being declared bankrupt. He orders Danilo to ensnare the millionairess. Danilo promises to get rid of the other marriage candidates: but refuses to ask for her hand in marriage himself. In the meantime Valencienne, Baron Zeta's wife, is being courted by Camille de Rosillon. She's enamoured, but rejects his advances. Act 2 Hanna Glawari's throwing a party with a very Pontevedrinian flavour. She sings a song about the wood nymph Vilja. Rosillon continues pursuing Valencienne. They retire for a rendezvous in a pavilion, which Zeta has nominated as the meeting place for fellow diplomats to discuss their country's looming bankruptcy. When the Baron finds the door locked he looks through the keyhole, and sees his wife and Camille. Njegus, the embassy's clerk, manages to smuggle Hanna into the pavilion through a back door, swapping places with Valencienne. Hanna uses this opportunity to drive Danilo crazy by announcing her, supposed, engagement to Camille. Act 3 To round off the evening Hanna, helped by Njegus, who organised everything, surprises Danilo with a performance by the Grisettes from Maxim's, during which Valencienne displays previously unknown talents. Hanna and Danilo waltz; music replacing their words. When Zeta realises that it really was his wife that he surprised in the pavilion with Camille, he demands an immediate divorce. He proposes to Hanna. She informs him that she'll lose her fortune if she marries again. Now that no one can accuse him of only being after her money, Danilo professes his love for her. Hanna then reveals that she really will lose her millions, but only because they become her new husband's property. Valencienne persuades the Baron that she's innocent, by showing him the inscription in the fan she gave Camille: „I'm a respectable woman.“

Franz Lehár was completely taken by surprise when his Merry Widow was an immediate worldwide success after it was premiered in Vienna in 1905, a time when operetta, which first emerged 50 years earlier in Paris, had already been pronounced dead. But it's often the case that things believed dead go on thriving. The mixture of enchanting music, witty dialogue, emotions that must be taken seriously and all kinds of dance - mazurka, waltz, even cakewalk, was simply irresistable. The characters' true emotions are expressed when they dance, culminating in the »Lippen schweigen / Lips say nothing« waltz. It's about two people who used to be a couple but were prevented from marrying because of their stations in life: the tenant farmer's daughter Hanna and Graf Danilo. Vanities, old wounds and gaps in their life stories prevent them from being reunited when they next meet – but they are, in the end. Claus Guth lets the turbulent action shimmer, as a play within a play, on a filmset. Dance, and Lehár's score, with one highlight after the other, reign supreme.