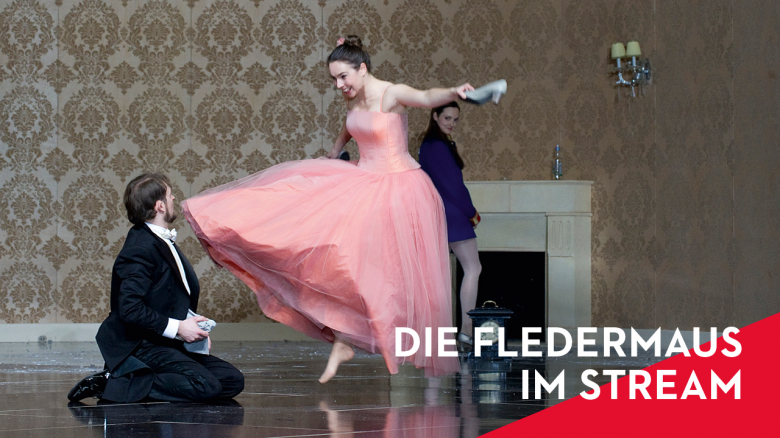 Viewable  VIA THIS LINK  until January 31

Gabriel von Eisenstein, an early retiree, and his wife Rosalinde live in a small spa town not far from Vienna. Although they've only been married for a few years routine has crept into their affectionate relationship. He also keeps secret from her that he sometimes attends rather special, private parties. Before his marriage Gabriel must have been unstoppable in his revels and amorous encounters, usually accompanied by his friend, Dr. Falke. He once played a mean trick when, after a ball, he dumped a completely drunk Falke in the town’s central square in the early hours of the morning. Unfortunately, Falke was dressed as a bat. The notary’s good reputation was down the drain, and his friendship with Eisenstein was never the same again. Eisenstein has no idea that since that day Falke has been plotting an intrigue intended to hopelessly engulf the man who believes himself to be firmly on the safe side of life. One winter’s day Gabriel von Eisenstein, who inherited not only a sunny disposition but also an explosive temperament, had an argument with an Austrian police officer. It was, by the way, never clarified whether this event had been staged by Falke. Austrian justice knew no mercy and Eisenstein was sentenced to a few days in jail. As the day of his friend’s incarceration draws near Falke pulls strings and sets his scheme in motion. Despite the considerable damage to his reputation caused by the unfortunate bat incident, he's still a favourite of Prince Orlofsky, who likes gathering artists and others of life’s flotsam and jetsam about him. Another member of the Prince’s entourage is a former lover of Eisenstein’s wife Rosalinde: Alfred, a one time tenor, who now gives the Prince singing lessons. It seems that all the inhabitants of the small town have a yearning for art, for theatre: yearning for the drama that they so painfully miss in their day to day lives. Alfred is enlisted to visit Rosalinde as soon as Eisenstein has set off for prison and try to tempt her to commit adultery. But, first of all, Falke has no trouble convincing his friend Eisenstein to make a small, discreet detour on his way to jail: to Prince Orlofsky’s party, to which the newly engaged dancing girls from the State Theatre have also been invited. Unfairly, Falke also informs Einsenstein’s wife about the plan. Rosalinde is a victim both of Falke and her own unfulfilled desires: should she commit adultery and give herself to Alfred or go and see for herself that her husband is cheating on her at this very moment instead of serving his prison sentence? But Falke has a solution ready here as well: thanks to his good connections he has cultivated contact with the new director of the small town’s prison. He too has been invited to Orlofsky’s. Nevertheless, as a dutiful official, he has Eisenstein taken into custody because he did not willingly appear to start his sentence. What the prison director cannot know is that the man he has arrested as Eisenstein is not Eisenstein, but Alfred, whom Rosalinde passed off as her husband to avoid a scandal. All meet up again at Orlofsky’s party: and all, on Falke’s advice, and as is usual for these intimate occasions, assume borrowed names. Eisenstein becomes Marquis Renard, the prison director Chevalier Chagrin and Adele, the Eisensteins’ maid, turns into a budding artist and student actress called Fräulein Olga. The party soon turns into a hazardous dance on slippery parquet for Eisenstein. He loses his footing as Marquis Renard and only begins to regain his old superiority when another person at the party manages his borrowed identity even more badly -  the dull and dutiful prison director Frank. Clueless Eisenstein now starts acting the lady killer, making a play for the main attraction of the evening, a masked Hungarian countess. He has no idea that she is his wife. She manages to purloin his talisman: a lady’s watch which he likes to use as bait during his escapades, promising it in return for certain favours. Everyone meets up again next morning in prison. The director returns from the night’s excursion closely followed by two of Falke’s other victims, the maid Adele and her sister Ida. They believe Frank really is a Chevalier and intend to blackmail him. The incidents of the previous night will be handled discreetly, all he has to do is finance acting lessons for Adele, who has owned up to not being Fräulein Olga. Before they reach an agreement Eisenstein appears, wanting Frank to lock him up in accordance with the law. It is a day of confessions: he, Eisenstein, is not Marquis Renard, but Eisenstein. Frank cannot, and does not want to believe it. He arrested Eisenstein yesterday, in the presence of his wife. Falke’s revenge now hits the inner sanctum: Eisenstein’s honour as a married man. Eisenstein switches identities again, disguising himself as a lawyer in order to advise his wife and her supposed lover Alfred, the »other Eisenstein«. In the end he is not able to contain his jealousy, but has to admit defeat when Rosalinde reveals that she was »his« Hungarian countess of the previous night, presenting the ominous lady’s watch as evidence. She's ready to file for divorce. Eisenstein realises that he's fallen victim to Falke. His unshakable belief in himself cannot save him from the multiple consequences of the past night. His defence that: »champagne was to blame for everything« falls on deaf ears, even in Baden near Vienna.

This Fledermaus is different. It sounds different - but the music's the same. It tells the story differently - one that's never really been clear anyway.  It shows people struggling for their fulfilment, their honour, their joy of life, and that's what makes things so amusing. »Lucky is he, who can forget what can't be changed anyway«, could be the motto of the work's performance history as well as the theme of Prince Orlofsky's ball. Christof Loy mistrusted the allegedly time honoured »functioning« dramatury of disguises and misunderstandings and investigated the story for his production: what is this »revenge of the bat« supposed to achieve, how was Dr. Falke planning to pay Eisenstein back for making him a laughing stock in a bat costume? This production tracks it down with the use of clever flashbacks and careful direction of dialogue. Loy listened intensively to the music, tweaking out all traces of nostalgic uncertainty so typical of the Austrian mentality of »this as well as that«, summed up »Opernwelt« (Uwe Schweikert). ThisFledermaus is more Fledermaus than many others.