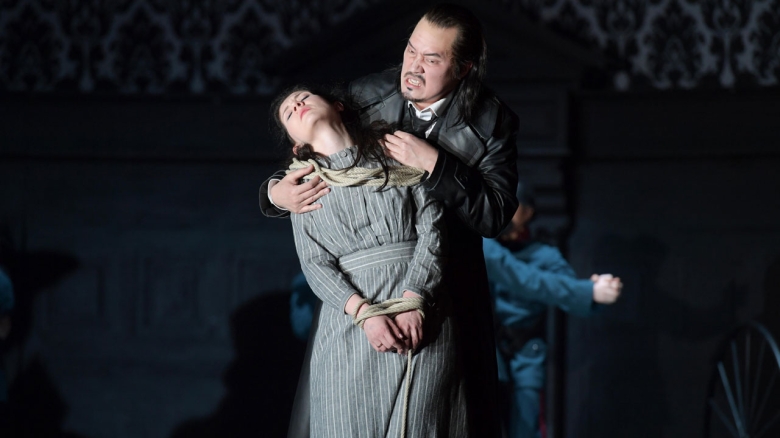 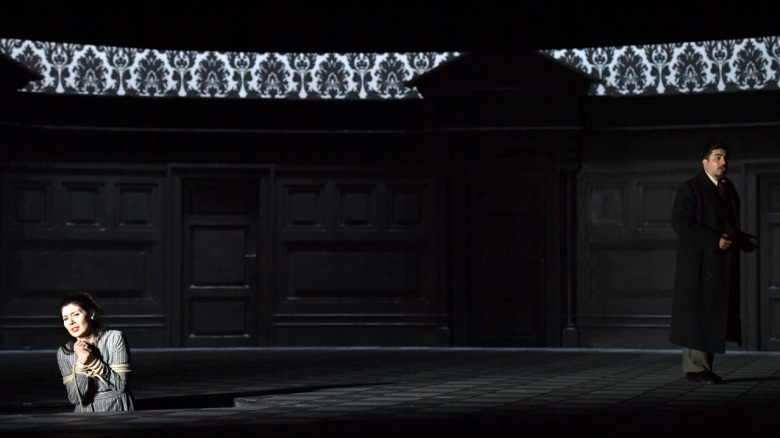 Introduction (on video, in German) will appear and on YouTube shortly before opening night

Fabrizio Vingradito and his wife Lucia are preparing to celebrate their son Giannetto's return from war. Pippo, Fabrizio's servant, released a magpie from its cage and the bird can be heard constantly calling his name - „Pippo“. Fabrizio wants his son to marry their maid Ninetta, because they've been in love for ages. Lucia's against this. She bemoans the loss of a silver fork, and blames it on Ninetta. The maid returns from picking strawberries. She can't wait for Giannetto to arrive. Fabrizio greets her warmly, but Lucia's unable to disguise her mistrust. The travelling tradesman Isacco hopes to sell his wares, but Pippo sends him packing. Giannetto's welcomed home. He hugs Ninetta. After the party he suggests that the family visit an ailing uncle. Ninetta carefully checks a case of silver cutlery. An exhausted, soldier speaks to her. She realises that it's her father, Fernando Villabella. He was sentenced to death after a fight with his superiors and is now on the run. The mayor surprises them and tries, again, to molest Ninetta. She spurns his advances, tells her father to pretend to be asleep, and passes him off to as a tramp. Giorgio, the scribe, appears with a „wanted“ poster. While the mayor tries to read it Fernando gives Ninetta two pieces of silver cutlery, asking her to sell them and hide the money in a tree. The mayor tells Ninetta to read the letter out loud. Realising that it's her father they're looking for, she changes the description of the wanted man to protect him. Ninetta secretly sells her father's silver to Isacco, but before she can hide the money Lucia discovers that another piece of cutlery's gone missing. The mayor, waiting to take revenge on Ninetta, orders an investigation. When it transpires that Ninetta's the deserter's daughter, money falls out of her pocket and Isacco boasts that he bought a fork and spoon, engraved with the initials F.V., from her, it seems her guilt is proven. Ninetta can't defend herself because it would mean betraying her father. The mayor has Ninetta arrested. Act 2 In prison. Ninetta asks Antonio, the prison guard, to summon Pippo so he can sell her crucifix and hide the money for her father. Giannetto visits the prisoner and tries to persuade her to tell him her secret, something that might exonerate her from the charges made against her. The mayor appears and offers to set Ninetta free if she'll give herself to him. Ninetta furiously turns his proposal down. Pippo arrives at the prison, at last, overjoyed to be able to do Ninetta a good turn. An encounter takes place in Fabrizio Vingradito's house between Fernando Villabella and Lucia, who tells him that Ninetta's been charged with theft, a crime punishable by death. Fernando decides that he must save his daughter, even if it means putting himself in danger. The judges find Ninetta guilty. Neither Giannetto's pleas nor Fernando's arrival can alter the death sentence. Fernando's recognised and arrested. Ernesto, a soldier, enters the village looking for the mayor so he can register Fernando's pardon from the King. The villagers accompany Ninetta to her place of execution. In the meantime Pippo and Antonio have discovered that the magpie had hidden a piece of gold in the top of the tower, where the stolen cutlery was also found. Ninetta's innocence is proven. Fernando's granted amnesty. Nothing now stands in the way of Giannetto and Ninetta's wedding.

The execution is halted: a magpie was guilty. Two Parisienne playwrites d’Aubigny and Caigniez turned the true story of an innocent servant girl, wrongly sentenced to death, into a melodrama in 1815. When, two years later, Rossini, was searching for something suitable for an opera, he decided on The Thieving Magpie - but with a happy ending. His heroine and victim of injustice is Ninetta. A rejected suitor accuses her of stealing some silver, to help her father, a deserter. The true thief, a magpie, is only discovered at the last minute. The story revolves around this coincidence, causing disastrous problems in the farming community. Rossini's music manages to find a balance between pathos and a firework display of coloratura. The gloomy mood of the original story is retained but combined with amusing scenes and a happy ending. The 25 year old's score was far ahead of its time. His music allows the figures in the bizarre story to switch between tragedy and comedy. Only the bird stays silent, because his chattering was never set to music.