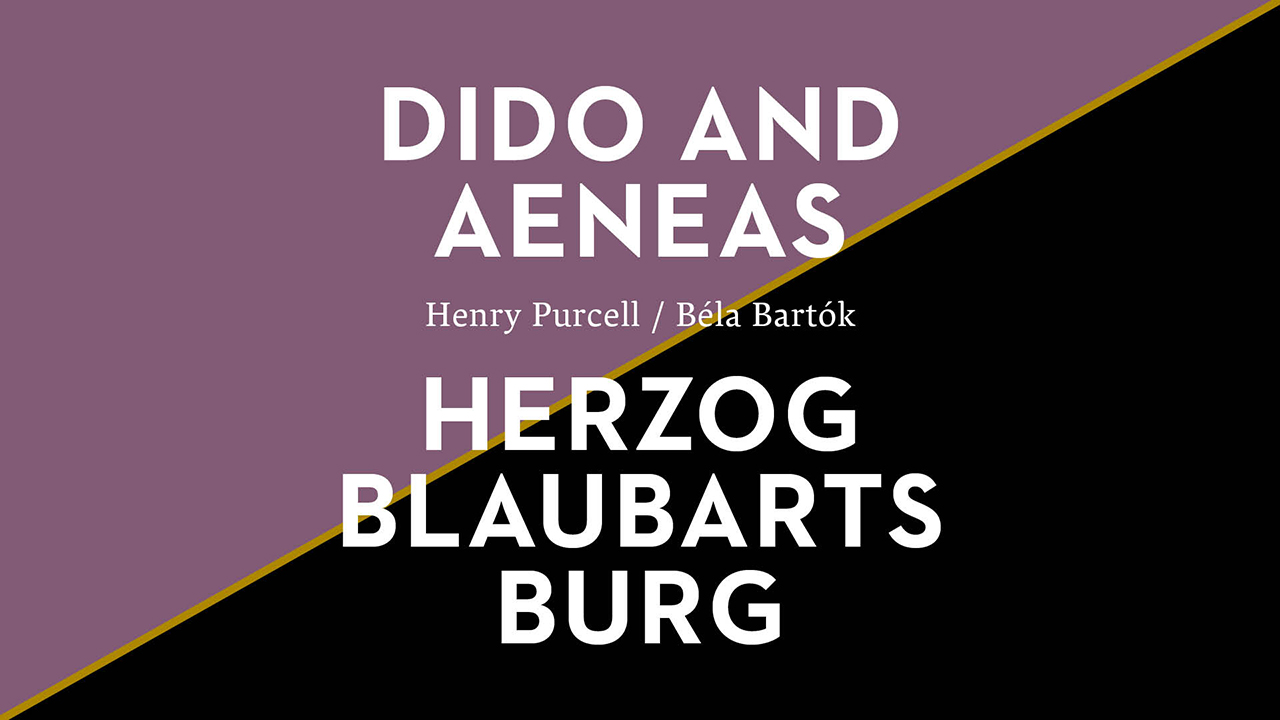 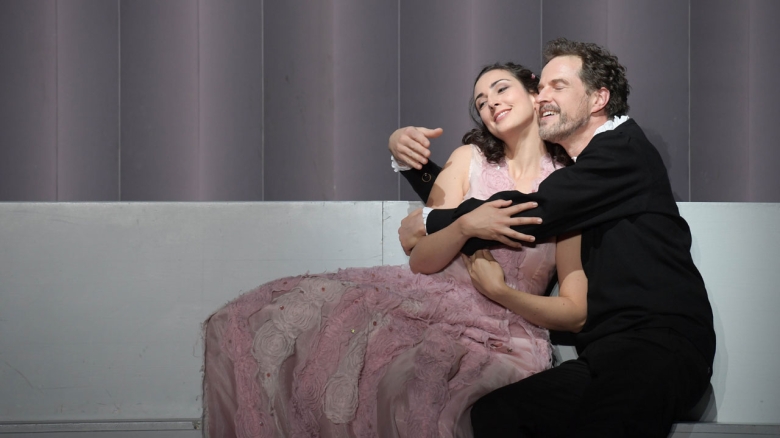 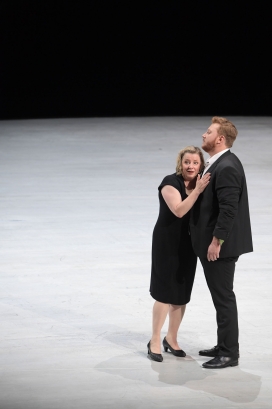 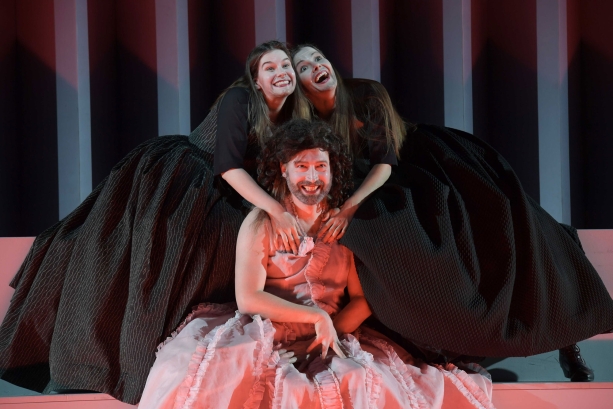 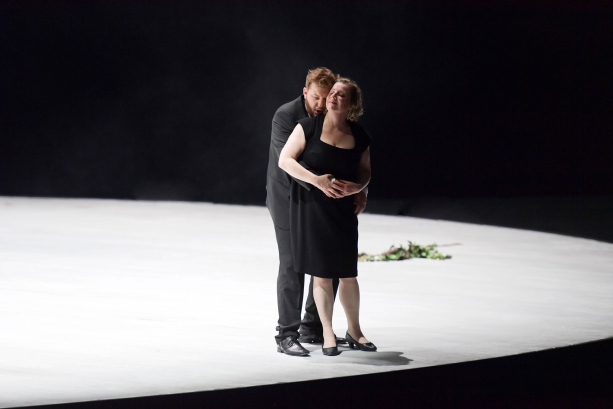 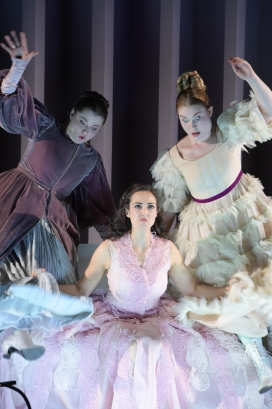 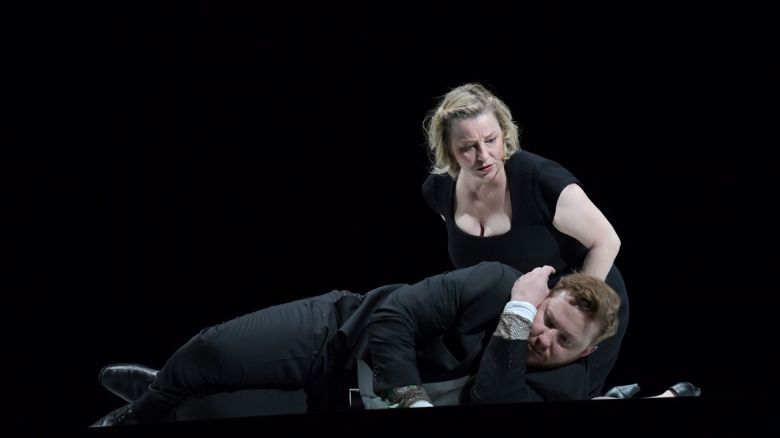 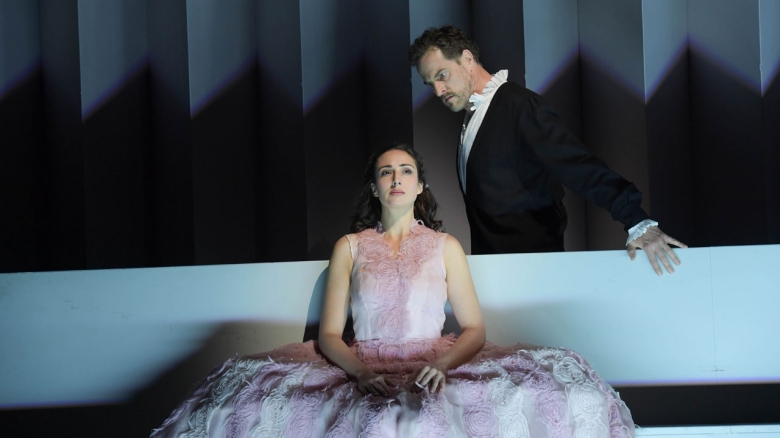 Dido and Aeneas
Opera in 5 scenes with an epilogue. Libretto by Nahum Tate based on Virgil.
First performance 1689
Josias Priest’s School for Young Ladies, London
Sung in English with German & English surtitles

Introduction (on video, in German) will appear here and on YouTube not long before opening night

Dido, the King of Carthage's widow, moved by the tale of Aeneas’ flight from the ruins of Troy, has fallen in love with him but can't reveal her feelings because she had sworn never to marry again. Urged on by Belinda, Dido finally gives in to Aeneas’ desires. Aeneas promises to postpone his journey home and stay with Dido. The court rejoices at the royal alliance. Act 2 Dido’s enemy, a sorceress, plans, with her witches, to destroy the Queen. The witches, intent on destroying Carthage and Dido and Aeneas’ love, plan to conjure up a storm to force Aeneas to take shelter and meet a spirit they'll send, to remind him of his duty to return to Italy. This, the witches hope, will make him give Dido up. Dido and Aeneas are being entertained by song and dance during a morning hunt. The witches' storm begins and the Queen and her retinue hurry back to the city. Aeneas hears the false spirit’s message: Jupiter himself commands that he not stay another day. Distraught, Aeneas resigns himself to the fact that he must leave Carthage and found a new Troy. Act 3 The sailors take leave from their lovers. The sorceress predicts that Dido’s death is nigh. The Queen anticipates her fate. Aeneas tells Dido that he must leave. On seeing her desperation he decides to go against Jupiter’s command. Dido, her pride wounded, insists that Aeneas must leave her. He goes, she dies of a broken heart.
BLUEBEARD Judith left her family and fiancé to follow Bluebeard. She loves him and asks for the keys to seven locked doors. Judith wants to bring some light into the damp, dark castle. Bluebeard reminds her about the rumours that circulate about him. His warnings don’t deter her from wanting to open all the doors in the castle and, reluctantly, he gives in. The first leads to his torture chamber. Behind the second door Judith finds Bluebeard’s weapons. She shows no fear, despite seeing bloodstains. She demands the other keys. The third reveals Bluebeard’s treasure chamber. Traces of blood on the jewels dampen Judith’s joy. Bluebeard is now keen for Judith to open the fourth door. A flowering garden is hidden behind it. The blooms flecked with blood. Bluebeard orders Judith to unlock the fifth door. There she finds a beautiful landscape. Judith notices that there's a blood stained cloud obscuring the sun. She wants to open the last two doors. Bluebeard fails to stop her. Behind the sixth is a lake of tears. The castle gets darker. Judith wants to know what's behind the seventh door. Bluebeard puts up a fight before yielding and giving her the last key. She finds Bluebeard’s three previous wives, the morning,  afternoon and evening. Judith belongs to the night. She decides to stay with Bluebeard. The castle stays dark forever.

The lovers in both operas struggle for unfulfilled relationships. Barrie Kosky's interpretation of Purcell's opera focuses on the lead female, underlining the intimacy of Purcell's poignant sound world. In Kosky's mind it's clearly a „One Woman Show with Guests“, the Carthaginian Queen Dido, abandoned by the Trojan hero Aeneas - her lamento ends with her dying of a broken heart.

Problems between man and wife escalate into an insoluable conflict in Béla Bartók's only opera. His setting of the symbolist poem by Béla Balázs to music avoids the gruesome elements in the Bluebeard tale, reducing the plot to a drama of the soul. The title figure in Barrie Kosky's production is not a wife murderer. The castle is a metaphor for Bluebeard's body, through which can be seen what is hidden behind its doors: blood, gold, tears and flowers. The battle of love plays out on Katrin Lea Tag's set, a bare, revolving stage, like an enormous, empty slice of the world, a symbol for lost paradise.