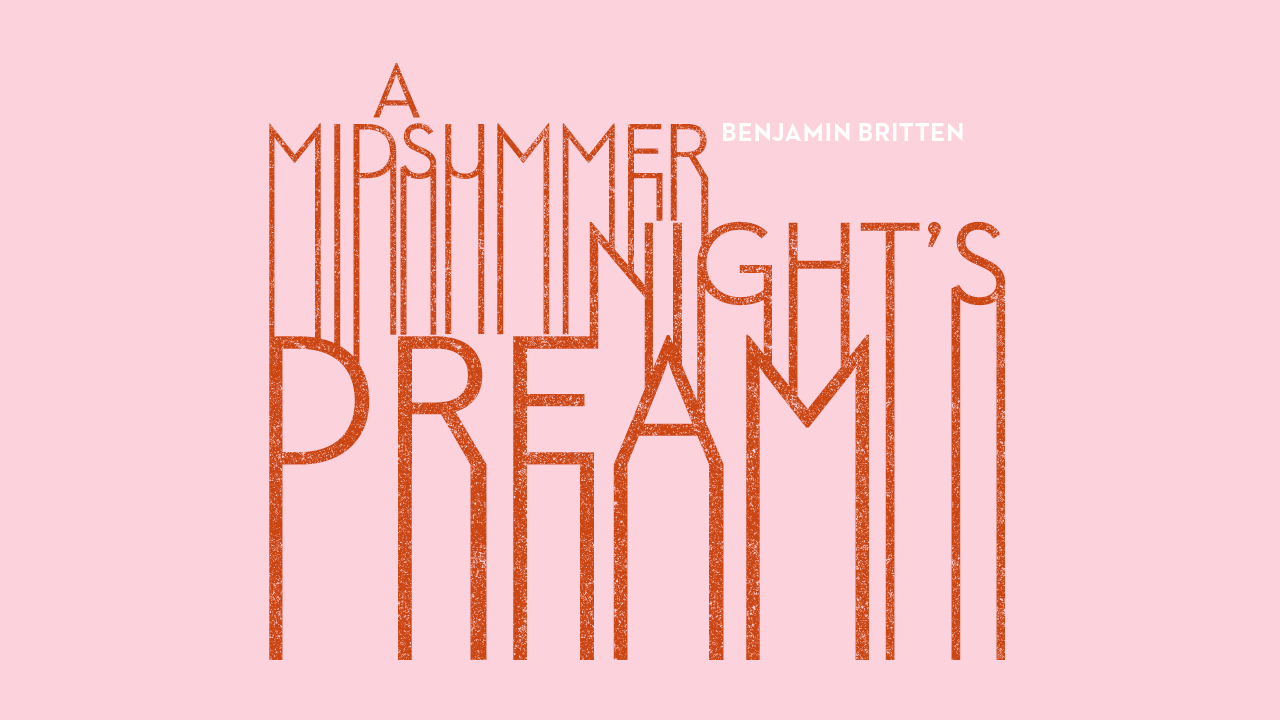 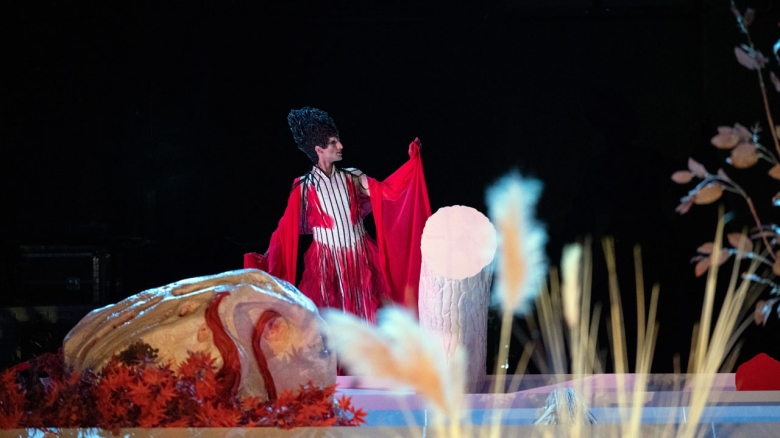 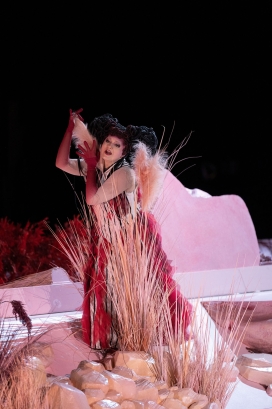 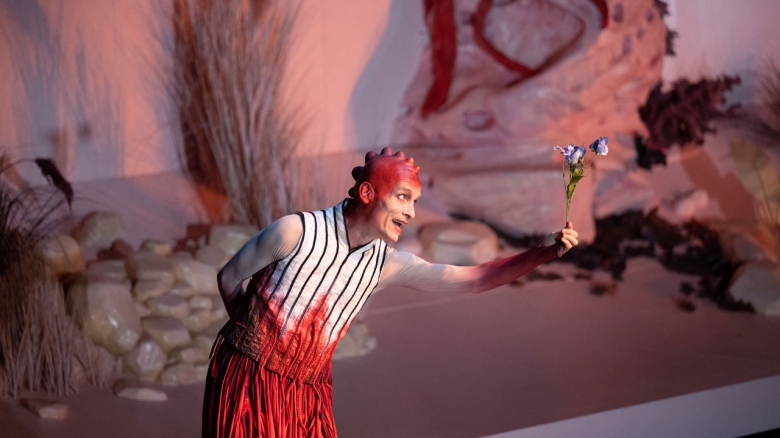 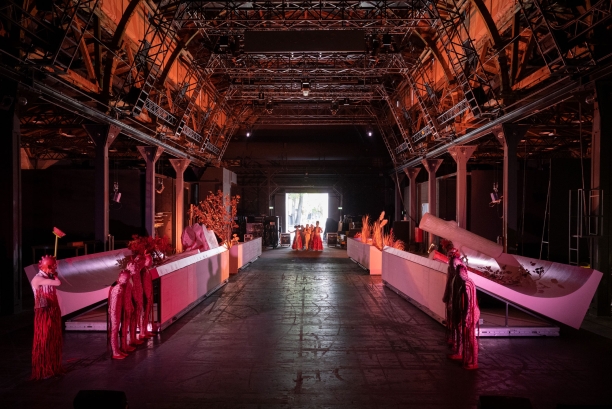 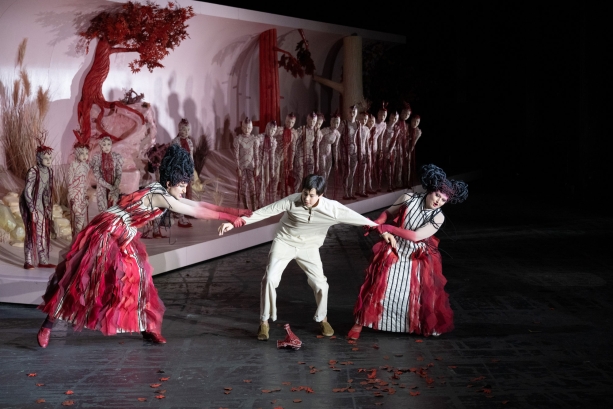 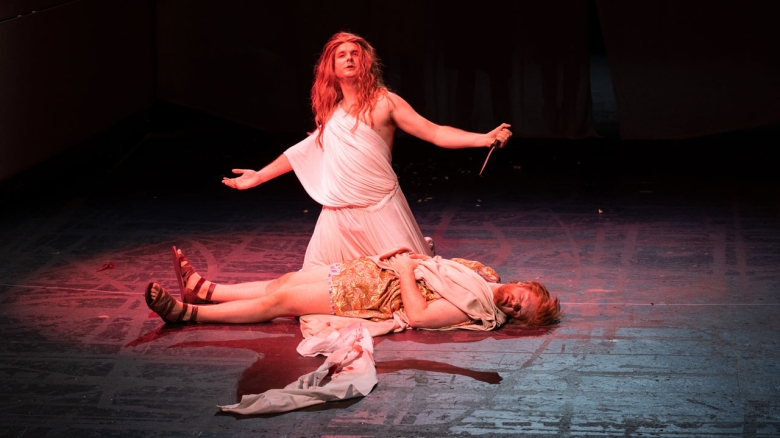 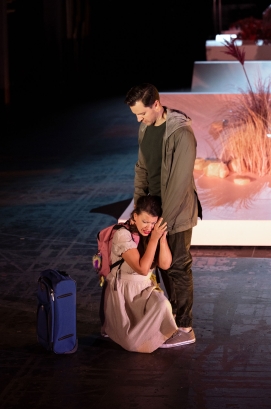 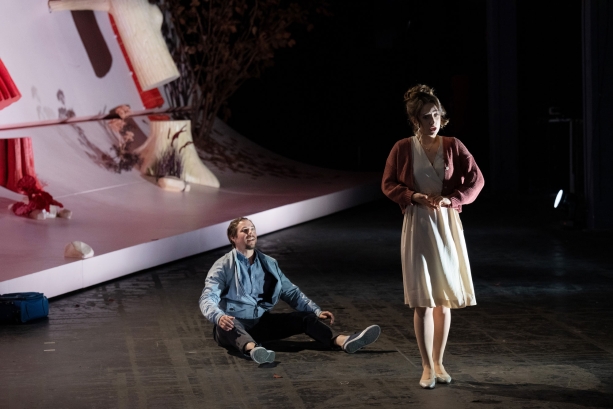 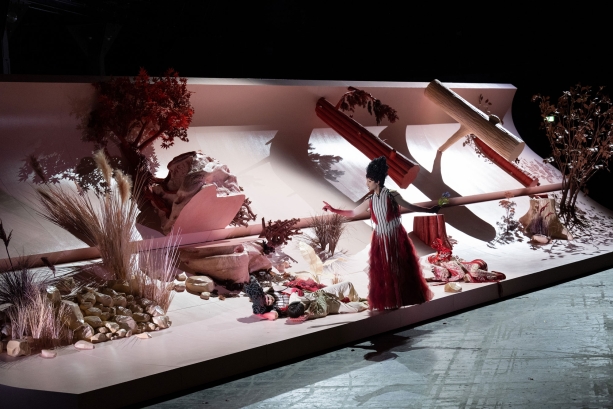 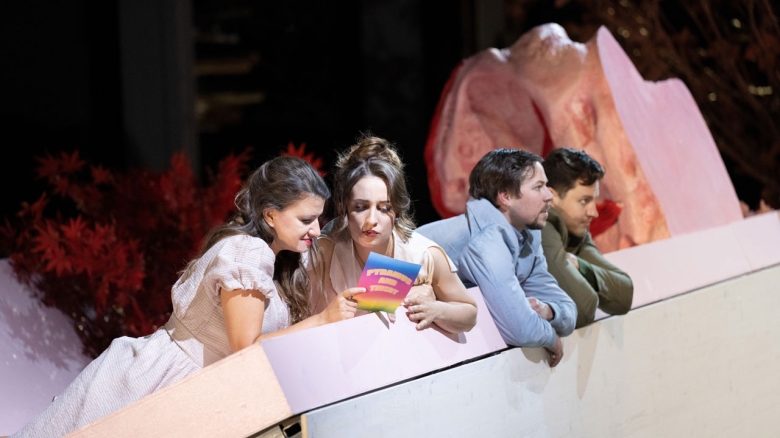 Performed in English with German surtitles

Oberon, King of the Fairies, and his Queen, Tytania, are arguing over a child who Tytania doesn’t want her husband to take as his page. This has upset the order of things. Oberon, intent on revenge, sends Puck off to find a magic flower, the juice of which, when squeezed onto eyelids, makes people fall in love with the first creature they see upon awaking. Four young people – Hermia, Lysander, Helena and Demetrius – are also in the woods outside Athens. Hermia and Lysander, who love each other but whose parents forbid them to marry, told Helena they’re going to elope because Hermia refuses to marry Demetrius, who’s decided to follow them, closely pursued by Helena, who’s madly in love with him. He tells her he no longer loves her and that she should leave him in peace. Oberon tells Puck to put magic juice in Demetrius‘ eyes so that he’ll love Helena again. In the meantime six handymen, under Peter Quince the carpenter’s direction, are trying to rehearse a play for Duke Theseus and Hippolyta’s wedding. Lysander and Hermia have got lost and decide to rest till morning, Puck mistakes him for Demetrius and squeezes magic juice into his eyes. Helena chances upon Lysander, who falls in love with her when he awakes, ignoring her protestations that it is Hermia he loves. Hermia awakes to find him gone. Oberon puts juice into sleeping Tytania’s eyes. The handymen return to rehearse their play and Bottom hides behind a bush, where Puck transforms him into a monster, which frightens his friends away. Tytania awakes and falls in love with him, her fairies tenderly caring from him. PART 2 Oberon and Puck find Tytania and Bottom asleep just as Demetrius appears. Puck admits his mistake. They listen as Demetrius professes his love for Hermia, who runs away. Oberon tells Puck to find Helena, and puts magic in Demetrius’ eyes. Helena and Lysander turn up. Demetrius awakes and falls for Helena, who thinks they’re all playing a joke on her. The young men go off to duel and the girls have a real argy-bargy. Puck lures them all back and eventually puts the juice in Lysander’s eyes. Oberon takes the spell off his Queen, who wakes, horrified by the creature lying beside her. She and Oberon are reconciled and Puck makes Bottom look himself again. The lovers wake thinking they’ve dreamt a strange dream and decide to return to Athens. Bottom’s friends are overjoyed when they find him again. Theseus pardons the lovers and everyone watches the play to celebrate Theseus and Hippolyta’s wedding. The fairies bless the palace and Puck has the last word.

Shakespeare's A Midsummer Night’s Dream had been set to music many times when Benjamin Britten and his life partner, the tenor Peter Pears, wrote the opera for the Aldeburgh Festival, which Britten founded. They remained true to the original play, but shortened it from five acts to three. It was originally to have been a chamber opera, but after Britten spotted the possibilities of conjuring up different worlds, mythical creatures, lovers and workmen in the play, he expanded the score for a larger orchestra. The result is a richly coloured composition in which the world of fairies, Oberon's countertenor, Tytania's coloratura and Puck's spoken words, is shaped by harp, xylophone and celeste. The lovers are accompanied by strings and wind instruments, while the scenes with the workmen are fleshed out with lower woodwind and brass, double basses and percussion.

The lovely hurly-burly, a summer night's dream, ends in the morning as a new day dawns.