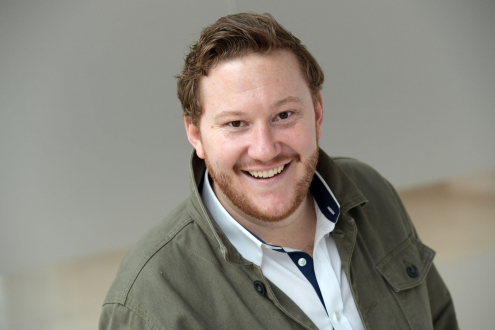 The American bass-baritone Nicholas Brownlee joined the Ensemble at Oper Frankfurt in 2020/21. His dizzy making number of roles last season included Kreon in Oedipus Rex, Jochanaan and the Spirit Messenger in our unmissable productions of Salome and Die Frau ohne Schatten, De Siriex in a new production of Giordano's Fedora and the title roles in Szymanowski's Król (King) Roger and Blaubarts Burg / Bluebeard's Castle. During the 2022/23 season you can hear him singing Hans Sachs (role debut) in a new production of Die Meistersinger, Leporello in Don Giovanni and the Forester in Das schlaue Füchslein / The Cunning Little Vixen. He will be singing Kaspar in Der Freischütz at the Bayerische Staatsoper in Munich and Wotan in Das Rheingold at Dallas Opera. During his time as a member of Los Angeles Opera's Young Artist Program his roles included Nourabad (Les pêcheurs de perles), Speaker (Die Zauberflöte), Uncle Bonze (Madama Butterfly), Captain Gardiner (Moby Dick) and Colline (La Bohème). Before coming to Frankfurt he was a member of the Ensemble at the Staatstheater in Karlsruhe, where roles included Melisso (Alcina), Enrico VIII (Anna Bolena), Count Capulet (Roméo et Juliette), Paolo Albiani (Simon Boccanegra), Kaspar (Der Freischütz), Leporello (Don Giovanni) and the Four Villains in Hoffmanns Erzählungen / The Tales of Hoffmann. He performed Mozart's Figaro, Nick Bottom in A Midsummer Night's Dream and Kurwenal in Tristan und Isolde at Santa Fe Opera and recently sang Colline at the Met in New York and the Bayerische Staatsoper in Munich. He recently enjoyed great success when he jumped in at short notice to sing Enrico VIII in Anna Bolena at the Vienna State Opera and plans include his return to Zurich Opera for Paolo Albiani in Simon Boccanegra. He has won many prizes, scholarships and competitions, including the 2015 Metropolitan Opera National Council Auditions.