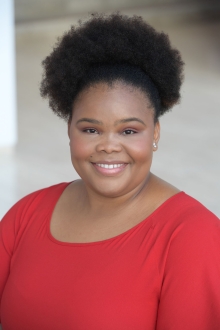 The South African soprano Nombulelo Yende joined Oper Frankfurt's Opera Studio in the 2021/22 season, during which she made her European debut singing the Guardian of the Temple's Threshold / Falcon in Die Frau ohne Schatten and sings in Il tabarro and Suor Dolcina (Suor Angelica).  During her second season roles include Poljka and The Warder in new productions of Tchaikovsky' s Die Zauberin / The Enchantress and Strauss' Elektra, the Dew Fairy in Hänsel und Gretel and Tatiana (role debut) in Eugene Onegin. She has also sung Giulietta (I Capuleti e i Montecchi), Serpina (La serva padrona), Carolina (Il matrimonio segreto) and 1st Lady (Die Zauberflöte) at the Artscape- and Baxter Theatre Centre in Cape Town and Youngblood Arts and Culture Development. She recently appeared in the RMB Starlight Classics in Johannesburg. She studied at Cape Town University. A finalist at the 2018 Tbilisi International Voice Competition, she won the 2017 Schock Foundation Prize for Singing, the 2016 Heidelberg Scholarship Prize and 2015 Ruth Ormond Prize. She also won a prize at the Concours International de Belcanto Vincenzo Bellini in France and the audience prize at the Bertelsmann Foundation's 2019 International Neue Stimmen competition in Gütersloh.