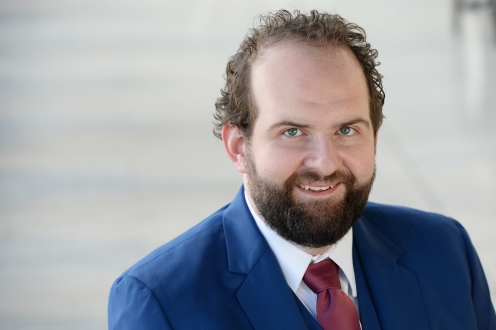 The American tenor AJ Glueckert made his debut at the Metropolitan Opera in New York in 2016/17, singing Erik in Der fliegende Holländer, the same season he joined the ensemble at Oper Frankfurt, where he can be heard this season singing Walther von Stolzing (role debut) in a new production of Die Meistersinger von Nürnberg, which he also sings at the Müpa in Budapest, Lenski  in Eugene Onegin, Man with a Donkey in a new production of Orff's Die Kluge / The Clever Woman and Pinkerton in Madama Butterfly. Last season he sang the title role in Wagner's Lohengrin here, a role he sang for the first time at the 2021 Summer Tirol Festival in Erl. Roles for the company in recent seasons have included Don José and Herodes in stunning Barrie Kosky productions of Carmen and Salome, Edrisi (Szymanowski's Król Roger), Graf Vaudémont (Iolanta), Flamand (Capriccio), Tenor / Bacchus, Lyonel (Flotow's Martha, CD available OehmsClassics), Froh (Das Rheingold), Skuratov (Aus einem Totenhaus / From the House of the Dead) and Erik. He made his European debut in Frankfurt in 2014/15, singing the Prince in Rusalka and recently sang the Scarlet Coloured Beast in Langaard's Antichrist at the Deutsche Oper Berlin. Engagements last season included the Tenor / Bacchus (Ariadne auf Naxos) and the title role in Oedipus Rex at the Teatro del Maggio Musicale in Florence, where he returns for Mephistopheles in Busoni's Doctor Faust. Other recent engagements have included Bacchus at the Glyndebourne Festival and Opera Theatre of St. Louis and Pinkerton (Madama Butterfly) at Santa Fe Opera, where he was a member of their Young Artists Program. He enjoys close ties to San Francisco Opera, as a former Adler Fellow and member of their Merola Opera Program, where he sang Beadle Bamford (Sweeney Todd), Normanno (Lucia di Lammermoor) and Kunz Vogelsang (Die Meistersinger von Nürnberg). He has also appeared at Pittsburgh Opera, Minnesota Opera and Opera Philadelphia. He graduated from the San Francisco Conservatory of Music and is a two time winner of the Metropolitan Opera National Council Auditions regional competition.