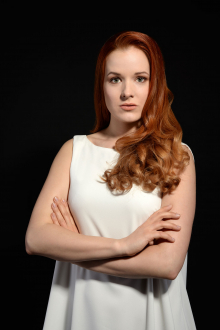 The German / Polish singer Alina Adamski is appearing at Oper Frankfurt for the first time, as Gilda in Rigoletto. Recent engagements have included the soprano in Helmut Lachenmann‘s Mädchen mit den Schwefelhölzern / Little Match Girl at Zurich Opera, the High Priestess in Aida at the Philharmonie in Oppeln, and the Waldvogel (Forest Bird) in Siegfried in the Royal Festival Hall in London. She was a member of Zurich Opera’s Opera Studio from 2017 – 2019, during which time roles included Trendy-Sandy-Mandy in Michael Pelzel‘s Last Call, Sandrina in Mozart‘s La finta giardiniera, Amanda in Ligeti‘s Le Grand Macabre and Atala in Offenbach‘s Häuptling Abendwind / Commander Evening Wind. She has sung the Queen of the Night (Die Zauberflöte) in Warsaw and Posen and was invited to join the Salzburg Festival‘s Young Singers Project, where she sang Frau Silberklang in Der Schauspieldirektor in 2017, returning in 2019 for Jouvenot in Adriana Lecouvreur. She took part in a Leading opera voices of the world concert at the Bolshoi in Moscow and was a member of the 2018 International Meistersinger Academy Neumarkt. Alina Adamski studied at the Music Academy in Łódź and Conservatorio di Musica Francesco Venezze in Rovigo and was a member of the Teatr Wielki’s Opera Academy in Warsaw. She won prizes at the Grand Prix de l'Opera in Bucharest and 10th International Stanisław Moniuszko Singing Competition.