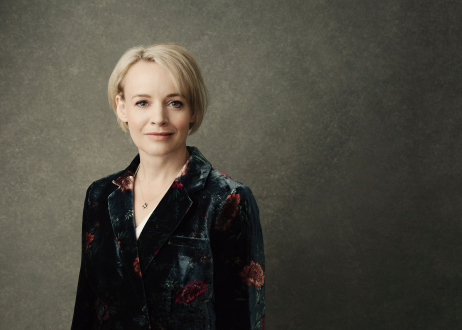 The British soprano Rachel Nicholls is singing at Oper Frankfurt for the first time, as Isolde in the new production of Tristan und Isolde, a role she has sung at Grange Park Opera, the Longborough Festival, Teatro Regio di Torino, Teatro dell’Opera di Roma, Théâtre des Champs-Élysées in Paris, Staatstheater in Karlsruhe and Staatsoper in Stuttgart. She enjoyed great success with Brünnhilde (role debut) in Wagner‘s Ring at the Longborough Festival, which she then sang at places including the Staatstheater in Karlsruhe, where she was heard as Eva (Die Meistersinger von Nürnberg), and the National Taichung Theater in Taiwan. She made her debut at the Royal Opera House Covent Garden in London as a Flower Maiden (Parsifal), which was followed by roles including Prilepa (Pique Dame). Other recent engagements have included Tatjana (Eugene Onegin) and Senta (The Flying Dutchman) at Scottish Opera, Salome at the Staatstheater in Hannover and Elektra at Theater Basel. She has worked with leading conductors including Sir Colin Davis, Sir John Eliot Gardiner, Valery Gergiev, Sir Simon Rattle and Sir Roger Norrington. She also enjoys a busy concert career, working with orchestras including the Academy of St Martin in the Fields, the Bach Collegium Japan, the BBC Symphony Orchestra, City of Birmingham Symphony Orchestra, the London Handel Players and London Philharmonic and has appeared in recital at the Wigmore Hall in London.