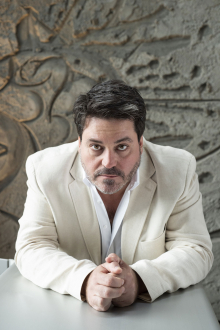 This Canadian born winner of the 1999 Hans Gabor Belvedere Competition is making his debut at Oper Frankfurt as Ulysse in Fauré's only opera, Pénélope , and can be heard again later in the season as Kurfürst Friedrich Wilhelm von Brandenburg in Henze's Der Prinz von Homburg / The Prince of Homburg- both new productions. Other plans include Max  in Weber''s Der Freischütz at the Aalto Musiktheater in Essen and Des Grieux in Manon Lescaut  at the Staatstheater in Mainz, where he is currently singing the title role in Hoffmanns Erzählungen / The Tales of Hoffmann . He recently enjoyed great success with Lohengrin at the Staatstheater in Nürnberg, conducted by Joana Mallwitz, and Faust (The Damnation of Faust), Max and Erik (Der fliegende Holländer / The Flying Dutchman) at the Staatsoper in Hannover. Other recent engagements have taken him to places including the Volksoper in Vienna, Scottish Opera in Glasgow, the Festival Opéra de Québéc and Opéra National du Rhin in Strasbourg. His repertoire includes Werther, Gounod's Faust, Nadir (Les pêcheurs de perles), Cavaradossi (Tosca) and Alfredo (La traviata). Eric Laporte started his career at Opéra de Montréal's opera studio and spent time as a member of the ensembles a the Landestheater Salzburg and TheatersBonn.