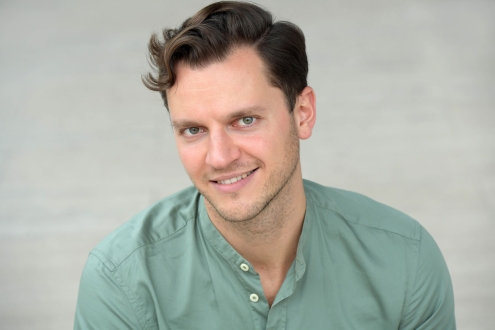 Danylo Matviienko left the Opera Studio to join the Ensemble at Oper Frankfurt last season, during which he sang 2nd Nazarene / Cappadozier in Barrie Kosky's stunning Salome, a Costume Seller in a new Nielsen's Masquerade, his first Guglielmos in Loy's prize-winning Così fan tutte,  the One-Eyed Brother in our unforgettable production of Die Frau ohne Schatten,  Demetrius in a wonderful new Britten's A Midsummer Night’s Dream and Antinoos in a new production of Dallapiccola's Ulisse. During Frankfurt's 2022/23 season he adds three new roles to his repertoire: Papageno and the Astrologer in new productions of Die Zauberflöte and Britten's The Burning Fiery Furnace and Rudolf in our wonderful Schreker's Der ferne Klang / The Distant Sound, sings Frère Léon in Messiaen's Saint François d'Assise at the Staatsoper in Stuttgart and Malatesta in Don Pasquale at the Tirol Festival in Erl this winter.  He first appeared here in 2017,  in the »Warsaw – Frankfurt – Transit« Soiree series as a member of Teatr Wielki's Opernakademie. Last season sang in Křenek's Schwergewicht / Heavyweight, Fauré's Pénélope, Don Carlo, and new productions of Rossini's La gazzetta and Salome. He was born in the Ukraine and was a member of the opera studios at the National Music Academy in Kiew and Opéra National de Paris, where he appeared as Junius in The Rape of Lucretia, in Boesman's Reigen, the Kurt Weill Story and sang Dr. Falke in Die Fledermaus and the Hunter in Rusalka.  Roles at the National Music Academy and National Operetta Theatre in Kiev and Donbass Opera in Donezk included Graf Danilo (Die lustige Witwe / The Merry Widow), Tchaikovsky's Eugene Onegin, Figaro (Il barbiere di Siviglia), Rossini's Macrobio (Pietra del paragone), Germano (La scala di seta) and Donizetti's Gasparo (Rita et Germano). He studied in Donezk where he also graduated from university in mathematics.