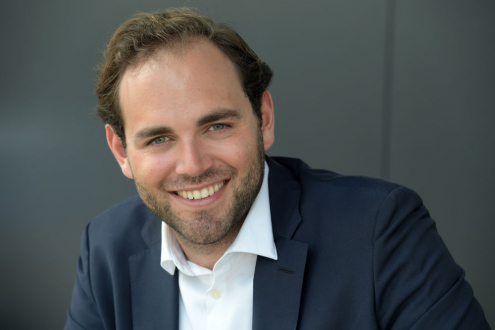 Liviu Holender joined the ensemble at Oper Frankfurt in 2019/20. He made his debut here singing Leone in a new production of Tamerlano in the Bockenheimer Depot, which was followed by the Helmsman in a new Tristan und Isolde, Moralès/Dancaïro in Carmen and Almaviva in Le nozze di Figaro. Last season he repeated his portrayal of Marullo in Rigoletto and sang Henrik (role debut) in a new production of Nielsen's Maskerade and Marco in Gianni Schicchi. During our 2022/23 season roles include Sciarrone (Tosca), Olivier in Strauss’ Capriccio, Peter (the Father) in Humperdinck's Hänsel und Gretel, Der Graf in Schreker's Der ferne Klang / The Distant Sound and Sharpless in Puccini's Madama Butterfly. He can also be heard as Dr. Falke in Die Fledermaus at the Teatro Felice Genua and Musikverein in Graz, a role with which he recently made his debut in Italy at the Teatro Maggio Musicale in Florence, where he then sang Harlekin in Ariadne auf Naxos. Other recent engagements have included Silvano (Un ballo in maschera) at  La Scala Milan and the Herald (Lohengrin) at the Tokyo Spring Festival under Marek Janowski. This Austrian musician was a member of the ensemble at the Staatstheater am Gärtnerplatz in Munich for two years, during which time roles included Guglielmo (Così fan tutte), Papageno (Die Zauberflöte), Schaunard (La Bohème), Oberjustizrat Hasentreffer (Henze's Der junge Lord / The Young Lord) and Hans Scholl in Zimmermann's Die Weiße Rose / The White Rose. He sang Papageno in a Zauberflöte for children while a member of the Salzburg Festival's 2018 Young Singers Project and his first Marullo in a new production of Rigoletto at the 2019 Bregenz Festival. He sang Silvio (Pagliacci) and Almaviva (Le nozze di Figaro) at the National Opera in Bucharest and in My Fair Lady at the Volksoper in Vienna. He is a busy recitalist who joined Thomas Hampson's Lied Academy at the Heidelberg Spring Festival in 2020 and appeared in recital at the Schubertiade in Hohenems and Philharmonie de Paris.  He sings Jesus in the St. Matthew Passion with the Vienna Philharmonic under Franz Welser Möst in 2023