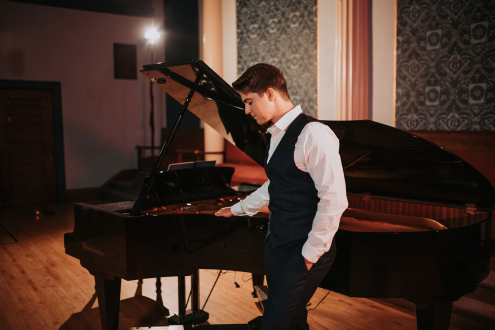 Jack Swanson is back at Oper Frankfurt, where he made his debut in 2019/20 as Rodrigo in a wonderful new production of Rossini's Otello, which was followed by a recital that October, to sing Ferrando in Cosí fan tutte. He recently gave a recital at the 2021 Rossini Opera Festival in Pesaro. This American tenor started the season off by making his debut at the Teatro Regio in Turin, singing Almaviva in Rossini's Il barbiere di Siviglia, a role he has sung in Santa Fe, with Glyndebourne Touring Opera and in Oslo. He recently appeared at the Opéra National de Lorraine for the first time, singing Tamino in Die Zauberflöte and can be heard this spring as Ferrando at the Opéra National du Rhin. Recent European debuts have included Le comte Ory at Garsington Opera, Florville (Il signor Bruschino) at the Rossini Festival in Pesaro, Nemorino (L'elisir d'amore) at Den Norske Opera in Oslo and Sam Kaplan in Weill's Street Scene at Cologne Opera. Santa Fe Opera, where he recently sang Lindoro (L'italiana in Algeri) and where he was a member of their Apprentice Singer Program, awarded him the Richard Tucker Memorial Prize twice. While studying at the University of Oklahoma, the Shepherd School of Music, Rice University and Seagle Music Colony's summer programme, Jack Swanson sang roles including Don Ottavio (Don Giovanni), Eurimaco (Il ritorno d'Ulisse in patria) and the title role in Britten's Albert Herring.