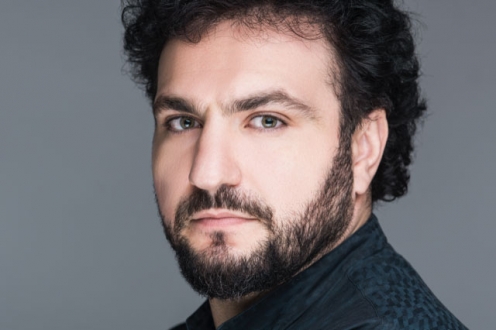 The wonderful tenor Hovhannes Ayvazyan is back at Oper Frankfurt, where he appeared for the first time last season as Don Alvaro in the new production of La forza del destino, which he sings again here later this season, to sing the title role in Don Carlo. He is a regular and popular guest at the Mariinski Theater in St. Petersburg, where he has enjoyed great success with roles including Mario Cavaradossi (Tosca), Manrico (Il trovatore), Canio (Pagliacci), Verdi‘s Don Carlo and Don José (Carmen). He will soon add three new roles to his repertoire: Herman in Pique Dame / The Queen of Spades, Riccardo in Un ballo in maschera and Calaf in Turandot. His repertoire includes Alfredo (La traviata), Turiddu (Cavalleria rusticana), Pinkerton (Madama Butterfly), Lenski (Eugen Onegin) and Andrea Chénier. He made his debut at the Arena di Verona in the summer of 2017, as Radames in Aida. Other recent engagements have taken this Armenian singer to renowned opera houses and concert halls including the Bolschoi Theater in Moscow, the Tatar State Opera in Kazan, Opera Belcanto of South Simcoe in Toronto, the BGE Theatre in Dublin, Teatro Massimo Bellini in Catania and Jerewas Opera, the Musikverein in Vienna, Philharmonie in Moscow and the Mariinski Concert Hall. Hovhannes Ayvazyan has won many awards and studied at the State Conservatoire in Jerewan.