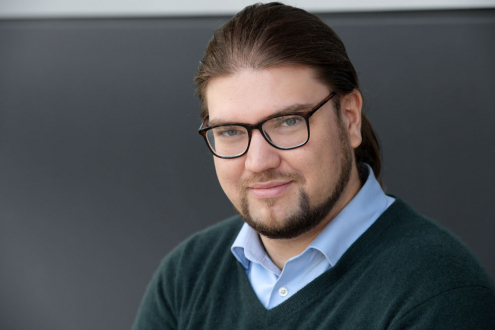 The Austrian / New Zealand bass Anthony Robin Schneider made his debut at Oper Frankfurt in 2018/19 as the Landlord in Schreker's Der ferne Klang / The Distant Sound (available on CD - OehmsClassics). He joined the Ensemble in 2019/20 and added four new roles to his repertoire last season: Ibn-Hakia in Iolanta, Panas in a new production of Rimsky-Korsakov's Die Nacht vor Weihnachten / The Night Before Christmas - »Performance of the Year« (Opernwelt magazine 2021/22), Heinrich der Vogler in Lohengrin and Cirillo in a new production of Giordano's Fedora. During the 2022/23 season you can hear him as 2nd Armed Man, Hans Schwarz and Hercules in new productions of Die Zauberflöte, Die Meistersinger and Handel's Hercules. Other recent roles for the company were Bartolo (Le nozze di Figaro), an Administrator / Sargeant (Lady Macbeth von Mzensk), a Monk / Grand Inquisitor (Don Carlo), Sparafucile (Rigoletto) and he gave a wonderful recital in the Holzfoyer.  He trained at the Academy of Vocal Arts in Philadelphia and started his career as a member of Houston Grand Opera's opera studio, where he returned in 2022 for Sarastro / The Speaker (Die Zauberflöte). Recent engagements have included Hector's Ghost (Les Troyens) at the Vienna State Opera, Truffaldin (Ariadne auf Naxos) at Santa Fe Opera and with the Cleveland Orchestra, the Baron / Grand Inquisitor (Candide) in Santa Fe,  Sacristan (Tosca), Fabrizio (Rossini's La pietra del paragone), Death (Der Kaiser von Atlantis) and Duc de Hoël (Le vin herbé) at Wolf Trap Opera. He enjoyed great success singing Fafner (role debut) in a new production of Das Rheingold at the 2021 Tirol Festival in Erl, the start of a new Ring, returning in 2022 for Hunding in a new Die Walküre. Anthony Robin Schneider was awarded a scholarship by the Kiri te Kanawa Foundation.