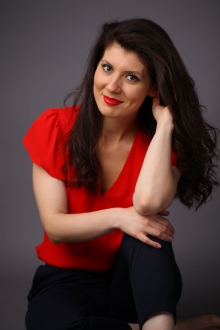 Florina Ilie left the Opera Studio to join the Ensemble at Oper Frankfurt in 2020/21. Roles for the company this season include repeats of her wonderful portrayals of Valencienne in Die lustige Witwe / The Merry Widow and Gilda in Rigoletto, Fiordiligi in Così fan tutte, Ninetta in La gazza ladra and Lauretta in Gianni Schicchi. She enjoyed great success here at the end of last season singing Sœur Constance de Saint-Denis in a new production of Poulenc's Dialogues des Carmélites. This Rumanian artist's first roles in Frankfurt included 1st Dryad (Rusalka), an Italian Singer (Capriccio), Najade (Ariadne auf Naxos), the Dew Fairy (Hänsel und Gretel) and Barbarina (Le nozze di Figaro), which were followed by Ilia (role debut) in Idomeneo. Roles at the National Opera in her home town of Bucharest have included Adina (L’elisir d’amore), Pamina, Susanna, Donna Elvira and Despina. She recently sang her first Antonias in The Tales of Hoffmann at the Opera Festival Klosterneuburg and took part in Bach's Matthew Passion at the Tirol Festival in Erl. She has won many prizes at competitions, including 1st Prize at the Sabin Dragoi Competition Theater Basel's Otto Edelmann Opera Studio OperAvenir scholarship prize. After leaving the University for Music in Bucharest she went on to further her studies at the University for Music and the Performing Arts in Vienna with Karlheinz Hanser.