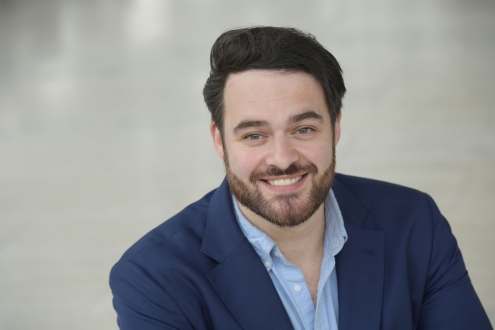 The Austrian / Australian tenor Gerard Schneider joined the ensemble at Oper Frankfurt in 2018/19. During the 2021/22 season he can be heard as Vaudémont (role debut) in Tchaikovsky's Iolanta, the King's son in our wonderful production of Humperdinck's seldom performed Königskinder and he repeats his wonderful portrayal of the Shepherd in Szymanowski's King Roger. He recently added three important roles to his repertoire, Lyonel in Flotow's Martha, the Duke in Rigoletto and the title role in Werther.  Future engagements include the Prince in Rusalka in Garsington and at the Edinburgh Festival, a role he sang when making his debut in Frankfurt and then at the Tirol Festival in Erl, where he returned this summer to sing the King's son in Königkinder for the first time and where he returns in the winter for the title role in a new production of Mascagni's L'amico Fritz. He has appeared at the Sydney Opera House, the Carnegie Hall and, in recital, the Met in New York. He made his debut at the Staatsoper in Stuttgart with the Duke in Rigoletto, sang Rodolfo in La Bohème at the Komische Oper Berlin, sang in Mozart and Salieri and the Tsar's Bride at Bard Music Festival and Nicias in Massenet's Thaïs at Minnesota Opera. He has also appeared at Washington Concert Opera, Welsh National Opera, at the Wexford Festival, the Wiesbaden May Festival and Bregenz Festival. In 2014 he took part in Il trovatore with the Vienna Philharmonic while a member of the Salzburg Festival's Young Artist Programme. He studied at the Guildhall School of Music, the Mozarteum in Salzburg and Juilliard School in New York before joining the National Opera Studio in London.