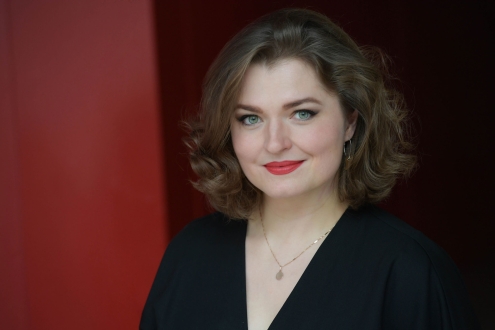 This season Kateryna Kasper sings the title role in Martha  (role debut) and repeats her portrayals of Tigrane in Radamisto, Sophie in Der Rosenkavalier and Frasquita in Carmen. This Ukrainian soprano left the Opera Studio to join the ensemble at Oper Frankfurt in 2014/15, since when she has enjoyed great success singing roles including Antonida (Glinka's Iwan Sussanin), Nanetta (Falstaff), Mozart's Zerlina and Susanna, Komtesse Stasi (Die Csárdásfürstin) and Valencienne in a new production of The Merry Widow. She recently sang the virtuoso role of Agilea (role debut) in Teseo in der Tchaikovsky Concert Hall in Moscow, Mozart's Requiem with the London Philharmonic Orchestra, Bach's St. John Passion at Opéra de Lille and the Philharmonie in Paris, and Handel's Messiah at the Bergen International Festival. She took part in Oper Frankfurt productions of Eötvös‘ Der goldene Drache / The Golden Dragon in Frankfurt and at the the 2015 Bregenz Festival, and Dido and Aeneas (Belinda) on tour with the company at the Edinburgh Festival and at Los Angeles Opera. She also enjoys a busy concert career appearing at, amongst others, the Handel Festival in Karlsruhe, Heidelberg Spring Festival and the Savonlinna Opera Festival. Awards won by Kateryna Kasper have included 1st Prize at the Mirjam Helin International Singing Competition in Helsinki. Her first solo album O wüßt ich doch den Weg zurück… / Oh, if only I could find my way back ... was released in 2018 (TYXart).

Find out more about Kateryna Kasper on her website