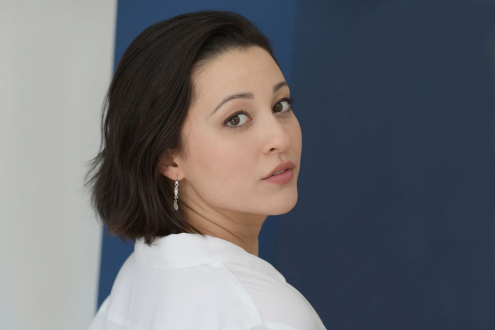 The Japanese-American mezzo-soprano Kelsey Lauritano left the opera studio to join the Ensemble at Oper Frankfurt in 2020/21. Roles for the company last season included the Landlord's Daughter in Humperdinck's Königskinder, a role she also sang in a new production at the 2021 Tirol Summer Festival in Erl, Dorabella in Così fan tutte, Giovanna in Rigoletto and Suzuki in a new production of Madama Butterfly.  During the 2022/23 season you can hear her as 2nd Lady, Paolo and Lichas in new productions of Die Zauberflöte, Mercadante's Francesca da Rimini and Handel's Hercules, the Fox in The Cunning Little Vixen and a Musician in Manon Lescaut. After making her debut in Germany in Frankfurt as the 3rd Dryad in Rusalka she sang Enrichetta di Francia in I puritani and a Spanish woman in Schreker's Der ferne Klang / The Distant Sound (available on CD - OehmsClassics), Mrs. Nolan in The Medium and in staged performances of Pergolesi's Stabat mater. These were followed by Emilia (role debut) in a new production of Rossini's Otello, roles in Martinů's Julietta and Nur wer die Sehnsucht kennt – an online evening of Tchaikovsky Lieder, directed by Christof Loy. Born in San Francisco she graduated from Juillard School in New York with distinction.  Whilst still a student she took part in productions including Rameau's Hippolyte et Aricie, Dove's Flight and sang the Child in L’enfant et les sortileges. She also sang Cherubino (role debut) in Le nozze di Figaro at the Music Academy of the West under James Conlon, Venus in Monteverdi's Il ballo delle Ingrate under William Christie and appeared at the Boston Early Music Festival, Virginia Arts Festival, the Opera Theatre of St. Louis, in Alice Tully Hall New York and at the International Meistersinger Academy. She has appeared in concert with the New World Symphony Orchestra, Nürnberg Symphony, at the New York Festival of Song in Lincoln Center and the SongFest in Los Angeles.