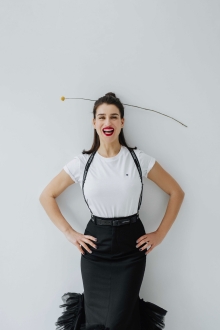 This winner of the 2019 Austrian Opera Prize for »Best Leading Female Role« is back at Oper Frankfurt, where she appeared for the first time in 2018 singing Tchaikovsky’s Iolanta, which was followed by her astonishing Manon Lescaut (revival: Dec/Jan 2022/23), to sing the title role in this new production of Tchaikovsky’s The Sorceress (which has never been performed in Frankfurt before). Born in Lithuania, she is a regular guest at leading opera houses around the world. Engagements in recent seasons have included Jenůfa at Covent Garden, Salome at the Salzburg Festival, Tatjana (Eugene Onegin), Elisabetta (Don Carlo) and Manon Lescaut at the Vienna State Opera and Lisa (Pique Dame) at La Scala Milan. In the summer of 2021 she sang Senta in Der fliegende Holländer / The Flying Dutchman in Bayreuth and Chrysothemis in Elektra at the Salzburg Festival, where her Salome won her the title of »Opera Singer of the Year« in 2018. Other recent important roles were Marie (Wozzeck) at the Concertgebouw Amsterdam, Marietta (Korngold’s Die tote Stadt / The Dead City) at La Scala Milan, Cio-Cio-San (Madama Butterfly) at the Vienna State Opera and Royal Opera in Stockholm and Rusalka in a new Christof Loy production at the Teatro Real in Madrid. Concert work has included Iolanta under Kirill Petrenko, Beethoven 9 under Riccardo Muti and Shostakovitch 14 under Alexander Shelley. Dissonance (Apha Classics) – a recording of Rachmaninov Lieder she made with Lukas Genusias, with whom she appeared in recital at Oper Frankfurt this autumn, was released in early 2022.