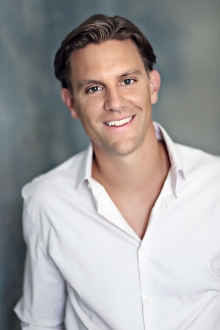 Martin Mitterrutzner was taught by Brigitte Fassbaender and was a member of the ensemble at Oper Frankfurt from 2011 – 2019 after spending time at the Tirol Landestheater. Now he's back in Frankfurt, where roles in the past included Fenton in Falstaff,  Belmonte in Die Entführung aus dem Serail, Elvino in La sonnambula, Don Ramiro La Cenerentola and in recital, Die schöne Müllerin, a recording of which, with the guitarist Martin Wesely, has recently been released, to sing Flamand in our wonderful production of Strauss' Capriccio and, later in the season, Don Ottavio in Don Giovanni. He started the season off singing Tamino in Die Zauberflöte at the Semper Oper in Dresden and Volksoper in Vienna. Recent engagements have included Brighella in Ariadne auf Naxos and Ferrando in Così fan tutte at the Salzburg Festival, Tamino at Zurich Opera, Don Ottavio in Don Giovanni and Narraboth in Salome at the Theater an der Wien, Ferrando at the Semperoper in Dresden, Mozart's Requiem at the Aix-en-Provence Festival directed by Calixto Bieito, Arbace (Idomeneo) and Iopas (Les Troyens) at the Bayerische Staatsoper. He also enjoys a busy concert career, appearing with the International Bachakademie Stuttgart, the Bavarian Radio's Chorus and Symphony Orchestra, Concentus Musicus, the Montreal Symphony Orchestra, Cleveland Orchestra, where he returns this season, and in the Palau de la Musica in Valencia. He returns to the Musikverein in Vienna twice this season, and can also be heard with the RIAS Kammerchor in Berlin and the NDR Elb Philharmonic Orchestra in Hamburg, He has given recitals at the Philharmonie in Cologne, the Wigmore Hall in London and Schubertiade in Schwarzenberg.

Find out more about Martin Mitterrutzner on his website