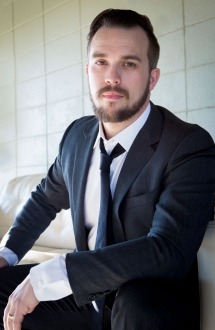 Samuel Levine is back at Oper Frankfurt, where made his European debut in 2018 in Trojahn's Enrico which was followed by an Old Prisoner (Aus einem Totenhaus / From the House of the Dead) and Andy in Olga Neuwirth's Lost Highway, to sing Arv (role debut) in a new production of Nielsen's Maskerade, which will be followed by Edrisi in a revival of Szymmanowski's Król Roger. He sang Kunz Vogelgesang (Die Meistersinger von Nürnberg at the Nationaltheater in Mannheim , L’Oncle/L’Étranger (Aribert Reimann's L’Invisible) at the Staatstheater in Braunschweig, Player 3 (Brett Dean's Hamlet) at Cologne Opera, Walther von der Vogelweide (Tannhäuser) at the Stadttheater in Klagenfurt, and the Tailor (Humperdinck's Königskinder) and a Noble von Brabant (Lohengrin) at the Tirol Festival in Erl. Born in America, engagements have taken him to theatres including Opera Philadelphia, Cincinnati Opera, West Edge Opera (title role in Frankenstein), Virginia Opera (Narraboth), the Brooklyn Academy of Music in New York and Handel's Messiah with the Houston Symphony. Other engagements have included roles in Carmen, Clemency and Don Giovanni at Boston Lyric Opera, Mascagni's Iris for Bard SummerScape, River of Light (world premiere) at Houston Grand Opera and the Ghosts of Versailles at the Opera Theatre of Saint Louis and Wexford Festival. He studied at the Oberlin Conservatory of Music and Yale University before joining the Juillard School in New York. He took part in the Opera Theatre of Saint Louis and Santa Fe Opera's young artist programs and was awarded a Gerda Lissner Foundation scholarship in 2017.