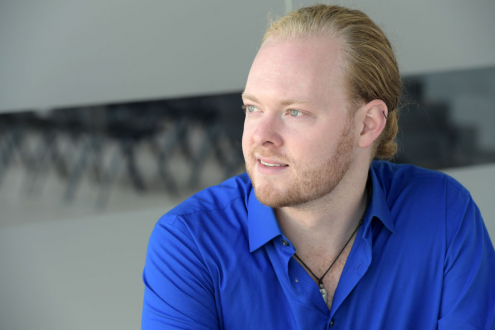 Iain MacNeil joined the Ensemble at Oper Frankfurt in 2019/20. This young Canadian baritone's roles for the company have included Melot (new production of Tristan und Isolde), Lord Tristan Mickleford (Flotow's Martha), Marullo (Rigoletto), the Chief of Police (Lady Macbeth von Mzensk), Olivier (Capriccio), Werschinin (Eötvös’ Tri sestry), Tadeusz (Weinberg's Die Passagierin / The (female) Passenger), 4 roles in Martinů's Julietta, Mozart's Figaro, which he also sang at Vancouver Opera, the Minstrel in our wonderful production of Humperdinck's rarely performed Königskinder, a role he sang for the first time at the 2021 Tirol Festival in Erl, and enjoyed a triumph with the title role in a new production of Dallapiccola's Ulisse. During the 2022/23 season he sings the Prince and Kajin (both role debuts) in new productions of Tchaikovsky's Die Zauberin / The Enchantress and Rudi Stephan's Die ersten Menschen / The First People  (world premiere Frankfurt 1920), Sciarrone in Tosca, the Baron in our wonderful production of Schreker's Der ferne Klang / The Distant Sound and Johann in Werther. Before joining the Opera Studio in Frankfurt Iain MacNeil was a member of the Canadian Opera Company's Opera Studio, where roles included Fiorello (Il barbiere di Siviglia), Marquis d’Obigny (La traviata) and Dancaïro (Carmen). He sang Tarquinius in The Rape of Lucretia at the 2016 Toronto Summer Music Festival and Don Giovanni at Saskatoon Opera. He took part in the Salzburg Festival's 2013 Emmerich Smola Young Singers Project and was awarded a scholarship by the Richard Wagner Verband Frankfurt in 2018.