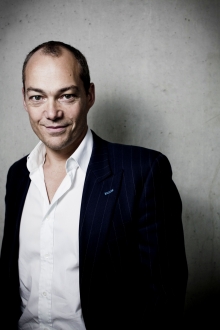 The British singer Christopher Maltman is one of the world’s leading baritones. He is back in Frankfurt this season, where he enjoyed great success in the past in recital, with the title roles in Simon Boccanegra and Billy Budd, Rodrigo (Don Carlo), Guy de Montfort (Les vêpres siciliennes) and Don Carlo di Vargas (La forza del destino), which has also sung at the Royal Opera House Covent Garden in London and Cologne Opera, for the title role in Rigoletto, which he sings soon at Washington National Opera, and Jochanaan (role debut) in this new production of Strauss’ Salome. Other engagements include Count Almaviva at Los Angeles Opera and Rossini’s Guillaume Tell at the Vienna State Opera. He added two new roles to his repertoire last season: Rigoletto at the Vienna and Berlin state operas and Enescu‘s Oedipe at the Salzburg Festival. Recent engagements have included Mark Rutland in Nico Muhly’s Marnie at the Metropolitan Opera in New York, Ford (Falstaff) at the Vienna State Opera and Graf Tamare (Schreker’s Die Gezeichneten) at the Bayerische Staatsoper in Munich. Winner of the Lieder prize at the BBC’s 1997 Cardiff Singer of the World Competition, he has given recitals at the Konzerthaus in Vienna, Concertgebouw in Amsterda, Mozarteum in Salzburg, the Carnegie Hall and Wigmore Hall and at the Schubertiade in Schwarzenberg, Aldeburgh and Edinburgh festivals. His extensive discography includes a Grammy winning recording of John Coriglianos’ The Ghosts of Versailles.