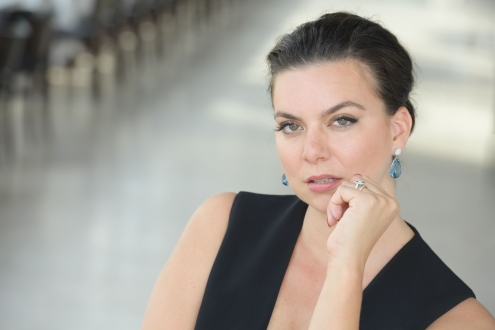 The Canadian soprano Ambur Braid made her debut at Oper Frankfurt singing the Queen in Křenek's Das geheime Königreich / The Secret Kingdom before moving to Europe to join the ensemble in 2018/19. During our 2022/23 season you can hear her in the title role of Tosca, Angèle and Chawa in new productions of Weill's Der Zar lässt sich fotografieren / The Tsar has his Photograph Taken and Rudi Stephan's Die ersten Menschen / The First People (world premiere Frankfurt 1920). Last season she sang Norma (role debut) and Salome in the new Kosky production of Strauss' opera which were preceded by the title role (role debut) in Ariadne auf Naxos in Frankfurt (semi-concert) and Madame Lidoine in a new production of Dialogues des Carmélites. She makes her debut at the Bregenz Festival this summer singing Stephana in Giordano's Siberia after singing Eva in a new production of Schreker's Irrelohe at the Opéra de Lyon. Other recent roles for the company have included the Queen of the Night (Die Zauberflöte), Helmwige (Die Walküre), Scintilla (Satyricon), and Elettra (Idomeneo). Other highlights in her career have included Sabina in the world premiere of Rufus Wainwright's Hadrian  at the Canadian Opera Company under Johannes Debus and Schmitt's La Tragédie de Salomé with the hr-Sinfonieorchester under Alain Altinoglu.  Ambur Braid studied at Royal Conservatory of Music's Glenn Gould School in Toronto and San Francisco Conservatory of Music and was a member of the Canadian Opera Company's Ensemble Studio.