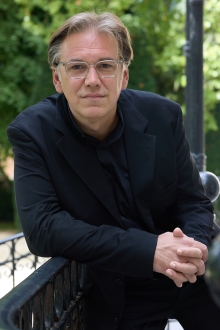 Hilko Dumno teaches how to sing Lieder at the University for Music and the Performing Arts in Frankfurt, and was also employed by the University for Music and Dance in Cologne. He studied piano at the Detmold/Münster Music University with Gregor Weichert before studying with Rainer Hoffmann, Eugen Wangler and Tabea Zimmermann at the HfMDK in Frankfurt. He has accompanied members of our ensemble in Lieder in the Holzfoyer since 2014. Artists with whom Hilko Dumno regularly works include Christoph Prégardien, Hedwig Fassbender, Julia Kleiter and Johannes Martin Kränzle at organisations all over Europe including the Schleswig Holstein Festival, the Schubertiade in Schwarzenberg, the Dresden Music Festival, Lucerne Festival and the Amadeus Festival in Geneva and at Oper Frankfurt. His artistic achievements are documented by recordings for the North German and Hessische Rundfunks and Radio Suisse Romande and various CD recordings such as Richard Strauss' Lieder voll Liebe und Tod with Hedwig Fassbender, Hugo Wolfs Italienisches Liederbuch with Christoph Prégardien and Julia Kleiter and a highly praised recording with Johannes Martin Kränzle.